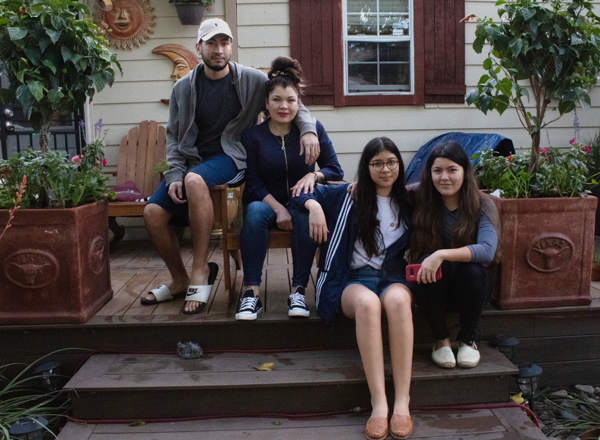 From left to right, Juan, Araceli, Jeanette and advertising major Mariela Lomeli pose outside their house in Dallas where they are sheltering in place. Photo by Baylie Tucker/The Et Cetera

Mariela Lomeli had her first trip to New York City all planned out. She was going to visit a high school friend there the last weekend of March, and together they would walk through Central Park, see the Gapstow Bridge and visit Times Square. What she hadn’t planned on was the arrival of COVID-19.

Lomeli started to hear reports on the news about the high number of New Yorkers coming down with the coronavirus. On March 21, a week before she was scheduled to leave, Lomeli canceled her flight. That day the state passed the 20,000 mark in confirmed coronavirus cases according to the New York City Department of Health and Mental Hygiene.

“I was actually hesitant [to cancel] at first, trying to make myself believe I could go on the trip,” she said. “But COVID-19 blew up during that time. Since it was my first time going to New York, it was really dissatisfying having to delay a first experience like that.”

Instead of sightseeing in Manhattan, Lomeli found herself sheltering-in-place in her three-bedroom home with her parents, three siblings and an uncle.

Lomeli, a 21-year old advertising major at Brookhaven who is currently taking Introduction to Mass Communication at Eastfield, said living in such close quarters is a mix of challenges and rewards.

“I don’t feel like it’s too much of a burden,” she said. “The house is more alive and it’s more interesting than just being … all by yourself in the house.”

Lomeli said one of the challenges is finding a place to study. Besides herself, her 23-year-old brother Juan and her 20-year-old twin sisters Jeanette and Jacqueline are taking college classes online. Lomeli said the bedrooms are small, so they solve their space problem by studying outside or in the living or dining room.

When they are not studying, Lomeli said she and her sisters are doing yoga, Zumba or spending time in the kitchen. So far, they have made scones, cheesecake, lemon meringue pie – whatever they are craving.

Lomeli is also spending time outdoors. She is cultivating aloe vera and magueys, and just added a chili pepper plant and Venus flytrap to her collection. She said she prefers gardening to spending hours inside watching Netflix.

“You get tired of that, just passively watching a screen,” she said.

While Lomeli and her sisters are fighting boredom at home, their mother Araceli Lomeli, is working up to 10 hours a day cleaning houses.

Before the pandemic she cleaned six houses per week. Now she cleans five, but she has to spend more time deep-cleaning and disinfecting, so her workload has actually increased.

Araceli said she tries to maintain a safe distance from the people whose house she is cleaning. She wears gloves and changes her clothes as soon as she gets home. But she wonders if these precautions are enough to keep her from getting the coronavirus and spreading it to her children.

“That’s what worries me right now,” she said.

Lomeli said she used to go along sometimes to help with the cleaning, but now her mother won’t let her.

“She thinks I will get it [COVID-19],” Lomeli said. “But I feel like she will be more affected if she gets it than myself. … We just want to help her be safe.” 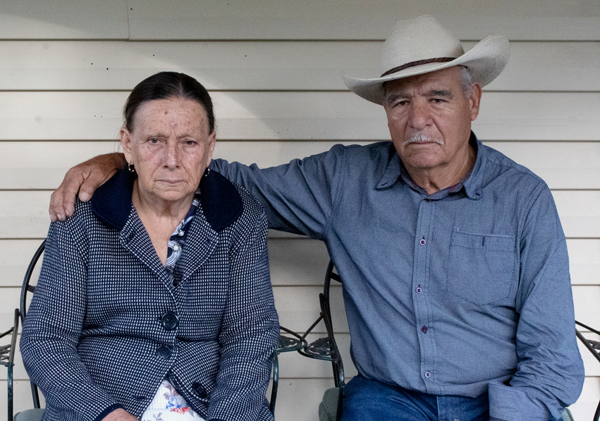 Guadalupe and Rafael Lomeli were visiting their family in Dallas when the U.S./Mexico border was closed due to coronavirus concerns. Now they are unable to return to their farm in Jalisco, Mexico. Photo by Baylie Tucker/The Et Cetera

Other members of Lomeli’s family are being affected by the pandemic in a different way. Her grandparents, Rafael and Guadalupe Lomeli, came up from their farm in Jalisco, Mexico, to visit in February. On March 19, President Donald Trump closed the U.S./Mexico border to nonessential travel in an effort to contain the coronavirus.

“We would have left already, but there’s not a way right now,” Rafael said.

They are staying with their son, one of Lomeli’s uncles. Rafael said even though they don’t have a way to get home in the foreseeable future, they are comfortable here with family. They are confident their son who lives in Mexico is taking good care of their house and livestock while they are away.

Lomeli said her grandparents usually come for a week at a time, so even though the circumstances are not ideal, she is enjoying their company.

“It’s one of the positives out of this whole situation,” she said.

Lomeli said she looks forward to going back to her favorite Mexican restaurant, Cuquitas when the pandemic is over. She is also thinking about re-scheduling her trip to New York, but probably not until the beginning of next year.

In the meantime, she said she is grateful for what she does have.