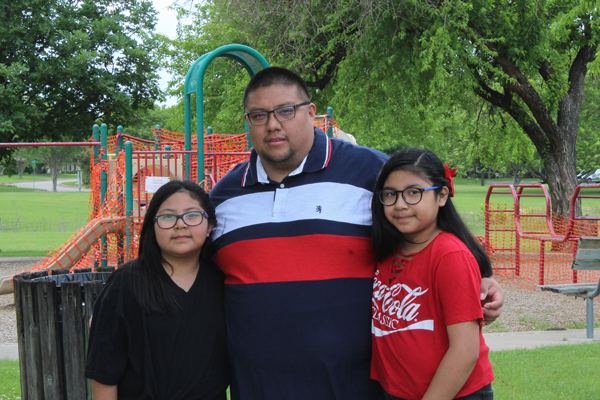 Criminal justice major David Ramirez stands outside of Baker Park in Mesquite with his daughters, Delilah, left and Angelina. On top of being a single father, Ramirez is now his daughters’ teacher. Photo by Baylie Tucker/The Et Cetera

It’s Monday at 5:30 a.m. and David Ramirez is up before the sun, but more importantly, before his daughters. For three hours he works while they sleep. It’s the only quiet time he has to catch up on his assignments.

Ramirez is a 32-year-old single parent and full-time student studying criminal justice. He is also a Phi Theta Kappa officer, a warehouse worker at Target and teacher to his two daughters. Since the coronavirus pandemic, he has had to adjust his schedule to make sure his daughters’ education doesn’t suffer. His 40-hour workweeks have been cut to 20 hours and the family doesn’t leave the house unless for essential trips for food, work or household items.

At 8:30 a.m. Ramirez’s roles change from student to father. He gets the girls up and ready for the day, trying to keep some semblance of a routine. He lays out clothes for 10-year-old Delilah while urging 12-year-old Angelina to hurry up and put on her shoes. 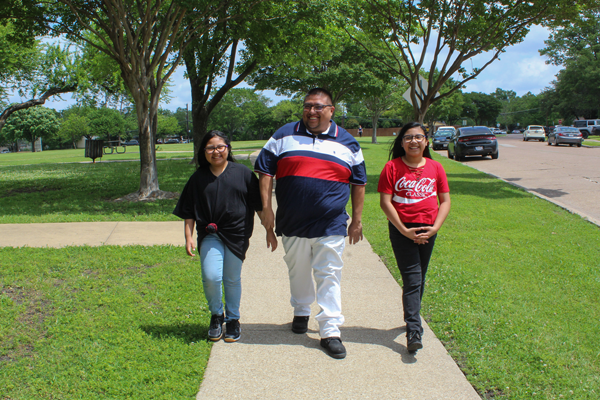 From left to right, Delilah, Ramirez and Angelina go outside to have a break from their school work. Photo by Baylie Tucker/The Et Cetera

“Why do we have to wear shoes inside the house?” Delilah asks.

“Because that’s what I’m asking you to do, Delilah,” he responds.

Ramirez heads to the kitchen to begin breakfast. Some days it’s cereal, but today it’s eggs, biscuits and Eggo waffles.

“Was there anything I forgot to finish?” he asks himself while scrambling eggs.

Criminal justice quizzes and discussion boards for philosophy are on his to-do list before he can start to focus on the girls’ assignments.

After a quick breakfast Ramirez heads to his first job of the day: home-schooling his kids.

Ramirez lives in Mesquite in a three-bedroom home that he shares with his two daughters and his parents. Sitting in his blue-painted bedroom that doubles as a classroom and a space where he records music, Ramirez reads through Angelina’s homework assignment. She is working on a PowerPoint presentation on the Earth’s layers for her sixth-grade science class.

“I don’t know how to add the bullet points,” Angelina says.

Ramirez takes the mouse and shows her how to edit a slide in PowerPoint clicking the mouse a few times until getting it right.

Ramirez’s younger daughter Delilah sits in the living room, watching the movie Selena and waiting for her turn to use the desktop computer.

Ramirez understands the importance of hard work when it comes to school and all aspects of life. After much trial and error with himself, his friends and his family, he shifted his life to where he is now. Becoming a single father a few years ago only pushed that mentality further.

Before the COVID-19 pandemic, Ramirez practically lived in the Eastfield library. He would arrive after dropping his daughters off at school in the morning and stay until after-school pickups, utilizing the college’s tutors to help with topics he and the girls struggled with. Now he has to learn from YouTube videos and hope he understands enough to relay the information to them.

“It’s like we’re learning together,” he says while handing Angelina his geology notes from a class he took last semester at Eastfield.

She’s in the zone so she pushes it to the side for later while continuing to watch Bill Nye science videos on the computer.

“Who’s that?” her father asks.

“How do you not know who Bill Nye is!” she exclaims, then rolls her eyes.

Ramirez bounces back and forth between helping Angelina, going through his own study material and going to the living room to check on Delilah.

At 11 a.m., he gives the girls a break to get their mind off school. A walk or playing outside will help them focus when they get back to work. While the girls play, Ramirez quizzes them.

“What did you just learn?” he asks while the girls go back and forth talking about their studies.

The break only lasts about 30 minutes and it’s back to the makeshift classroom until lunchtime. Ramirez tries to keep a structure close to their normal school schedule while still making it easy for them to adapt and stay focused.

Around 1 p.m. he makes them their favorite meal, macaroni and cheese, and they all sit down to watch cartoons until 1:45 when they return to their schoolwork.

Once 1:45 hits they’re back in class but now Delilah is at the computer while Angelina works at the kitchen table. They work like this until about 3 p.m., the time they would normally get out of school.

The rest of the day is family time. They play games or watch TV or movies. At some point Ramirez likes to review what they learned throughout the day as a whole.

“I’m new to this whole teaching thing,” he says. “I don’t know how teachers do it. I definitely have a newfound respect for them.”

During times like these when he’s stressed or overwhelmed, Ramirez turns to music. He writes and sings songs and raps, inviting the girls to join to express emotions they don’t feel they can or want to talk about.

This all started when their mom left.

“I couldn’t really get my little girls to open up,” Ramirez said.

He began writing a song called “Broken Home” and asked his girls to be a part of it. Together they wrote the lyrics, which explain the loss they felt.

The girls join in on the hook of the song singing, “Daddy, please don’t leave. Mommy please don’t go. I don’t want a broken home.”

Three and a half years have passed since his daughters have last seen their mother. Ramirez knew he had to step up and be responsible for his girls in her absence.

In addition to the schoolwork they do together, Ramirez and his girls are learning how to shoot and edit music videos for their songs. They take turns filming each other and learning how to put the videos together.

“It’s just a daddy-daughter thing we do,” Ramirez said. “And we’re learning along the way.”

On top of being a full-time student and a now full-time teacher to his daughters, Ramirez also works at Target, in the back, sorting stock for online orders. Due to COVID-19 his employment status has gone from full to part-time. On days when he works, the girls’ grandparents watch them at home.

Despite these changes to his income and schedule, Ramirez stays hopeful. 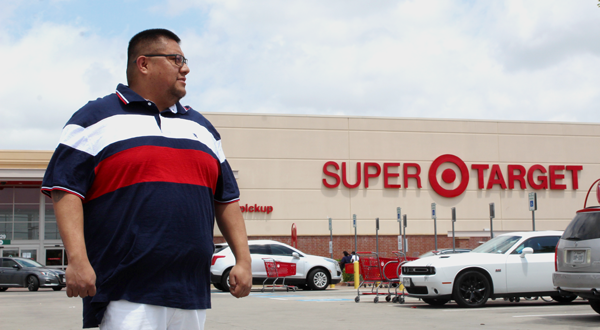 Ramirez works at the Super Target in Mesquite as a warehouse stocker. Since the pandemic from COVID-19 hit, his hours have been reduced. Due to company policies, The Et Cetera could not photograph him while working. Photo by Baylie Tucker/The Et Cetera

He works from 2 to 9 p.m., two days a week. Lately, it’s been a frenzy. With news of longer and more severe lockdowns, people are ordering online now more than ever.

This gives Ramirez deeper respect for those that work in even more in-demand places like grocery stores.

“They really are out there in the battlefield,” he says.

Thankfully, his manager stresses the importance of following the Centers for Disease Control and Prevention’s orders, so he doesn’t have to worry too much.

The stockroom is set up like a factory and there are rows of assembly lines. Where people once stood right next to each other, now they skip a row to ensure they maintain proper social distancing.

While this could be looked at as a negative, Ramirez manages to find the positives in this new normal.

“It’s making us talk to each other more,” he says.

He believes this has improved teamwork as a whole.

Instead of multiple people making numerous trips, they limit the trips to ensure less chances of contaminating themselves or others.

This minimizes the number of times they have to interact with customers and keeps them all a little bit safer with a greater peace of mind.

After work Ramirez clocks out and heads home to relieve his parents from their babysitting duties. After checking in on the girls to make sure they’re getting ready for bed and brushing their teeth, Ramirez opens up his laptop and heads straight to his eCampus account. Before he goes to sleep, he aims to get some more studying done and prepare for the next day of being a dad and a teacher.

This is his last semester at Eastfield. In the fall, he plans to transfer to the University of North Texas to pursue a degree in criminal law. However, the coronavirus has now halted in-person classes for the remainder of the spring semester and it’s unknown whether the same will happen for the fall semester.

“Learning how to adapt to change is critical because it will happen in life,” Ramirez said. “The best part to come out of this pandemic is that I get to spend time with my little girls. It’s like summer vacation all the time.”