From front to back, Beth, John and Patrick Kwong on April 13 while living in quarantine after Patrick tested positive for COVID-19 a week prior. Photo by Skye Seipp/The Et Cetera

When Patrick Kwong’s temperature reached 103 on the morning of April 3, he knew it was time to get checked for COVID-19. At the MD Family Clinic in Dallas he first tested negative for flu and strep and was directed to the COVID-19 testing line. Three days later the results came back positive.

Patrick Kwong looks out from the window of his room while in quarantine on April 13. Photo by Skye Seipp/The Et Cetera

On March 31, Kwong, brother of Eastfield student and biology premed major John Kwong, experienced his first COVID-19 symptom, diarrhea. Initially he didn’t think anything of it but started to worry after he checked his temperature and found he was running a fever. That night he quarantined himself in his room at his parents’ house.

“I was pretty frustrated with myself,” he said. “I thought I had been pretty careful with taking precautions to prevent myself from getting the virus. I’m the last person I thought would get it.”

On a typical day in quarantine he would wake up around 9 a.m. and eat the breakfast his mom had put on the table outside his bedroom door. She used disposable utensils and plates so nobody else in the house would come in contact with the items he’d touched. Between 10 a.m. to noon he’d either go back to sleep or watch Netflix. Between noon and 2 p.m. he had lunch, and between 2 p.m. and 5 p.m. he watched more Netflix and scrolled through social media. Dinner was brought up soon after 6 p.m., and then he showered and got back in bed for another night of sleep.

“There’s not much to my day,” he said. “It’s been hard to find any motivation to be productive.”

Living in the same house as his parents and two brothers, Kwong had to be especially careful when leaving his room. When he needed to use the restroom or shower, he made sure to disinfect and wipe everything down since he shares the bathroom with his brothers.

Beth Kwong looks out the window from the first floor of her home in Mesquite. Photo by Skye Seipp/The Et Cetera

Beth, Patrick’s mother, said she is devastated by everything Patrick and their family have had to go through.

“As a mom it’s heartbreaking because when our kids are sick, we just want to give them a hug and take care of them,” she said. “But we can only see each other through FaceTime right now.”

One of Beth’s biggest worries is for her husband Philip. In the last 3 years he has been in cardiac arrest multiple times, has had eight heart procedures and is diabetic. Due to his cardiac arrest he suffers from dementia and does not retain information for longer than five minutes. Everyday Beth has to remind him of the virus and why he is unable to be around his children.

Beth is unable to kiss her husband and the two of them now have to face opposite directions in bed when they sleep because she is afraid that if she has contracted the virus, she could spread it to him.

Family friends and members of Sunnyvale Baptist Church have been dropping off medication, food and Gatorade at their doorstep in order to help the family out while they are self-quarantined.

“We’re trying to stay strong and pray,” Beth said. “We have a strong support system, and this is a time where you see the kindness in people come out despite this awful situation.” 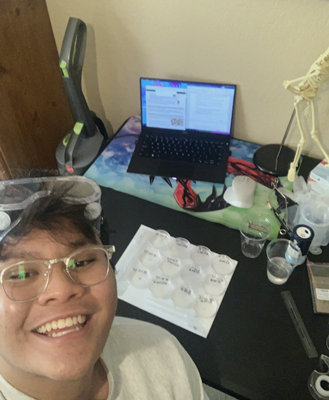 John Kwong takes a selfie while studying the birth and growth of Brine Shrimp for general biology from his home on April 13. Photo courtesy of John Kwong

Kwong’s brother John has his own set of challenges to deal with. With the switch to online classes, John has to do his science labs at home. Eastfield has provided at-home lab kits, but he said it is difficult to get through the lab without a partner. He also struggles with procrastination.

“It’s hard when I’m not physically at the school to remind myself that I should be doing work,” he said. “Now I just have due dates, and knowing me I’ll just wait until the last minute to start doing stuff.”

John said his family have been wearing masks and self-isolating ever since Kwong tested positive.

“Family is all you have in these hard times,” John said. “And when you can’t hug your family it gets lonesome. Having to isolate yourself from your loved ones, which is weird.”

On April 6, the day he tested positive, Kwong was one of 1,155 coronavirus cases in Dallas County. As of April 27, there had been 3,105 cases and 84 deaths, according to Dallas County Health and Human Services.

Kwong said the only coronavirus symptom that worsened was his cough, which made it hard for him to take deep breaths but didn’t cause him pain.

He took Tylenol to alleviate his body aches, migraines and fever, and at night he took Nyquil to keep his fever down and help him sleep. His fever lasted for nine days.

Kwong was retested on April 17 and again on April 21. Both results came back negative, and he was free to leave self-isolation.

“Being out of isolation feels great,” he said. “It’s nice to know that I can see my family and spend time with them apart from FaceTime. Honestly, I look forward to just being able to run errands and to actually be out of the house.”