Dallas County extends ‘Safer at Home’ orders to May 15 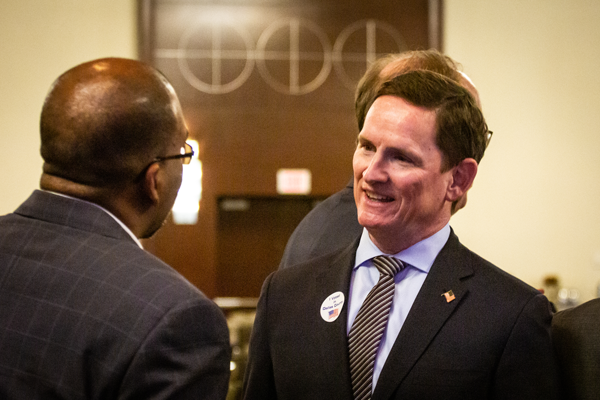 Judge Clay Jenkins at the Dallas Democratic watch party for Super Tuesday on March 4. Jenkins says his extension of the stay-at-home orders will not conflict with Gov. Greg Abbott’s plan to begin reopening parts of the state’s economy. Photo by Anthony Lazon/The Et Cetera

Dallas County commissioners voted 3-2 today to extend the stay-at-home orders until May 15.

The Dallas Morning News reported today that Abbott said he would release an order Friday stating any county rules conflicting with his would be overturned.

The “Safer at Home” order includes gatherings capped at 10 people, maintaining social distancing, wearing cloth masks when working or entering an essential business and still keeping businesses that are not essential closed.

“Safer-at-home is the underpinning that allows us to stay safe now and allows us to have the ability to loosen restrictions and open our economy,” Jenkins said. “It means making good personal responsibility decisions.”

The restrictions were originally set through April 30, but Jenkins has the authority to push the order until the emergency declaration for the county ends on May 20. However, Director of Dallas County Human Health and Services Philip Huang suggested the county commissioners extend the orders through May 30. He said the reason was that there need to be two weeks of decline before loosening restrictions.

“The data is showing a difference. We are ‘flattening the curve,’” Huang said. “We are seeing the results of everyone’s sacrifice and of the orders. It really is slowing down the transmission, but it really is just going to require maintaining that vigilance as we try to open some of the other things consistent with the governor’s orders. But it just has to be in a controlled manner.”

Huang added that Dallas County’s rate of COVID-19 cases doubling is at about two weeks compared to earlier projections that showed it at a couple of days.

As to when the county will be able to open back up, Huang said there are multiple factors such as hospitalization and intensive-care numbers, but there is no magic number of cases per day or deaths before he would recommend going back to normal.

Jenkins said he is listening to the advice of scientists and medical experts for when he would begin loosening more restrictions. He added that if it’s done wrong, there could be a spike in cases and deaths, which would “devastate” people when the limitations were tightened again.

“The science doesn’t say you can’t open your economy,” he said. “The science says you do it in such a way so that you don’t have a huge increase in COVID positive cases.”

Dallas County reported 90 additional cases of coronavirus today, bringing the total to 2,602. Four deaths, three of whom were Mesquite residents, were also reported today in the county, making the total 64.

Pandemic hastens one college; initiative still displeasing to some