Campus administration has made an effort to address problems surrounding diversity and inclusion on campus.

However, some staff and faculty are dissatisfied with their method of using speakers from the corporate world, some of whom made what they said were insensitive comments about the LGBTQ community. 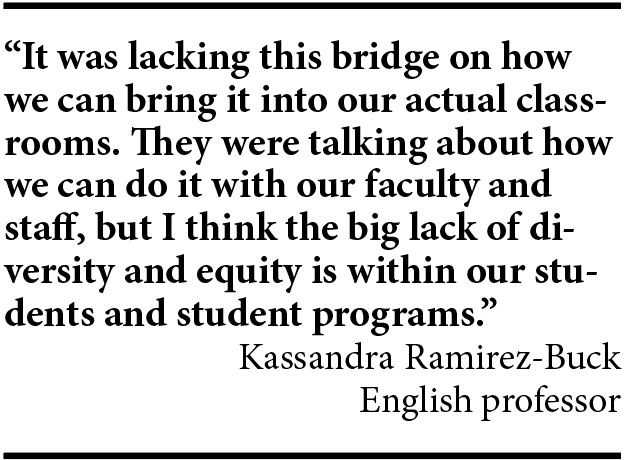 On Feb. 21 a panel of diversity officers from the private sector visited campus to talk about strategies used at their companies to be more inclusive. George Marquez, assistant chief of Talent Central with the Dallas County Community College District, also spoke at the event about ways the district is planning to become more inclusive by using employee resource groups.

“We are more involved with community than we ever have before,” Marquez said. “The National Diversity Council is our baseline and our standard for the way that we’re going to move forward.”

English professor Kassandra Ramirez-Buck attended the panel and said she wished there was representation from academia. She added that it felt like a lecture and reminded her of when she worked in the private sector.

“It was lacking this bridge on how we can bring it into our actual classrooms,” she said. “They were talking about how we can do it with our faculty and staff, but I think the big lack of diversity and equity is within our students and student programs.”

As a professor, Ramirez-Buck has witnessed how accepting students for who they are can result in positive benefits.

She gave an example of one of her students who was a part of the transgender community and wished to go by a different name rather than what was on the roll sheet.

At this time, the student could not change their name in the district’s system. Ramirez-Buck chose to call the student by their preferred name and said the student expressed sincere gratitude to her for doing so.

“Students shouldn’t have this added stress if that’s who they are,” she said. “Education should be fun and stress-free. I just don’t want them to be nervous about being their true selves.”

Center of Equity, Inclusion and Diversity program coordinator Chris Schlarb, who identifies as trans, said they left the panel discussion early because comments made by one of the speakers gave them a panic attack.

Schlarb said the speaker from Wells Fargo, Donna Davis, made comments that sounded like she perceives people who identify as trans as exotic.

Davis was talking about battling her own biases by joining her company’s LGBTQ employee group. She said one of the members had a daughter who was “transgendered,” and that the story changed her way of thinking.

Schlarb said Davis’ use of the term transgendered made it seem like that person was without an identity.

“As an individual who identifies as transgender, I took it personally and a very negative sign that the administration would invite a panelist who used offensive language regarding the LGBTQ community especially given the administration’s lack of response to the bias incidents earlier,” they said in an email. “It’s obvious to me that our administration needs to repost the director position for the Center for Equity, Inclusion and Diversity due to their lack of knowledge in this area.”

The Center for Equity, Inclusion and Diversity has not had a director Ashmi Patel left in August. Katy Launius, dean of student success and wellness, brought up this issue during her comments in October.

President Eddie Tealer said the position was not filled due to budgetary concerns, but that it was not permanent and made it sound like the position would be filled later.

At the end of the panel discussion, Launius addressed the panelists and Davis’ comments that prompted Schlarb to leave.

Conversations about diversity, equity and inclusion sparked back in October when Launius stood up at the end of Tealer’s forum to proclaim that members of the LGBTQ and other marginalized groups did not feel safe on campus.

She gave examples such as LGBTQ safe zone stickers being torn off doors and other derogatory comments toward LGBTQ members.

She ended by questioning Tealer and his cabinet about what they would do to ensure the campus was inclusive for everyone.

Tealer responded to these concerns by saying he would look into the issue and “make sure we check that diversity box.”

“I feel like Dr. Tealer has stuck to his word,” Launius said. “He took the concern seriously, and [said] that he would engage in a period of investigation and then response. It’s clear that he’s doing so, and especially as we as an institution are moving more fully into our work related to Achieving the Dream, there’s even more campus conversations about what it means to be an inclusive and equitable campus.”

Launius has been putting together different pieces of training on campus. Some of them are specifically geared toward LGBTQ safe zone training, while others provide participants with broader training on creating a more inclusive campus.

This has included Launius bringing in outside sources like Natalie Gillard, who founded the game Factuality, which allows participants to live as someone from a different demographic than themselves. Launius also put together another training on Feb. 27 that simulated living as someone from a lower socioeconomic background.

“I really think folks walked away both having learned a lot, but also in a way that’s not threatening because … a lot of times it can feel shameful,” she said. “I think what the game does is show that it’s not necessarily me as an individual. It’s about the structures that have been created around me to create unearned power but then unearned disadvantage.”

Before the panel, Schlarb said nothing has been done to address the biased attacks on campus aimed at the LGBTQ community. 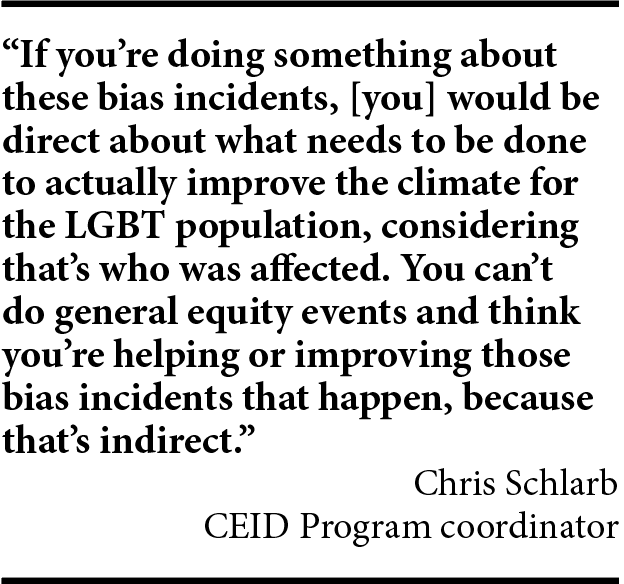 They said Tealer has made statements to address equity on campus, but that they’ve never heard the words LGBTQ come out of his mouth.

“If you’re doing something about these bias incidents, [you] would be direct about what needs to be done to actually improve the climate for the LGBT population, considering that’s who was affected,” they said. “You can’t do general equity events and think you’re helping or improving those bias incidents that happen, because that’s indirect.”

English professor Andrew Tolle was unable to attend the panel due to a Faculty Association meeting that was taking place at the same time, but was vocal at the forum in October about the issue.

Tolle said when these incidents first began back in 2018, the problem on campus rested with students, faculty and staff. He added that the administration responded to the incidents properly by creating the Center for Equity, Inclusion and Diversity.

He said the problem on campus now lies with the administrators not making stronger statements about these issues. He said hiring people for the CEID would make that easier.

“It’s not like this is some strange center that we created out of nowhere,” Tolle said. “This is something that is very common for other institutions to have. It’s not my responsibility to share with faculty members, staff members or administrators how to deal with LGBTQ folks. … It is the responsibility of the entire institution, so you need an institutional framework for that. For that reason, you cannot refuse to hire vacant positions and you can’t decide that you’re going to kill it through attrition.”

Recap through tweets: President’s forum leads to questions about diversity on campus

The president’s forum on Oct. 11 in G-101 brought light to issues on campus regarding diversity and acceptance of marginalized groups after the dean of student success and wellness addressed President Eddie Tealer at the […]

Opinion: Challenging books should be taught not banned

Frustrated supporters of thought-provoking literature recently celebrated Banned Books Week. But considering all the efforts to suppress “controversial” writing, maybe the recognition should be year-round. The inclusion of LGBTQ content is cited as being […]