Jane Hutchinson, an Eastfield student for 20-plus years, was a lover of art, a breast cancer survivor, had sassy personality and a thirst for knowledge.

Hutchinson died Sunday, Jan. 5, from natural causes. She was 92. 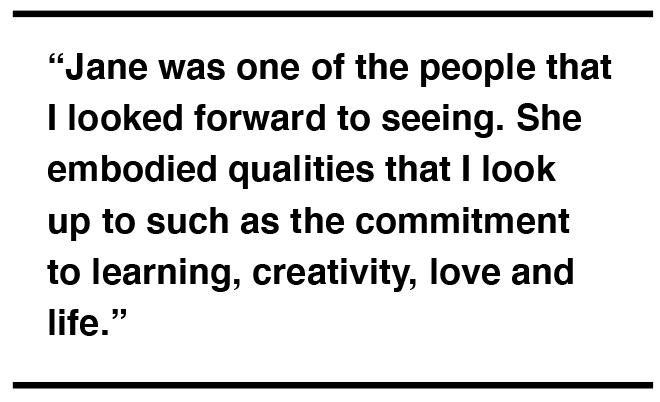 Hutchinson was a stay-at-home mother for most of her children’s adolescent years until later taking a job as a seamstress at a dry cleaners. After retiring, Hutchinson took a variety of art classes at Eastfield but eventually focused solely on ceramics.

According to Hutchinson’s daughter, Susan Romero, before ceramics Hutchinson enjoyed gardening, oil painting and sewing. She was a part of the Dallas Gardening Club and hand-made her children’s clothes up until they went to high school.

She was also a part of an organization called Philanthropic Educational Organization Sisterhood that celebrates, educates and empowers women to reach their fullest potential.

Ceramics professor Eric Eley said Hutchinson had been in his class every year since he started working at Eastfield four years ago.

“She didn’t come in and make the same thing over and over again,” Eley said. “She came here to learn and always set new goals for herself.”

Even after maxing out her free credit hours offered to seniors, Jane would petition to continue taking the same class because she enjoyed being able to create art. 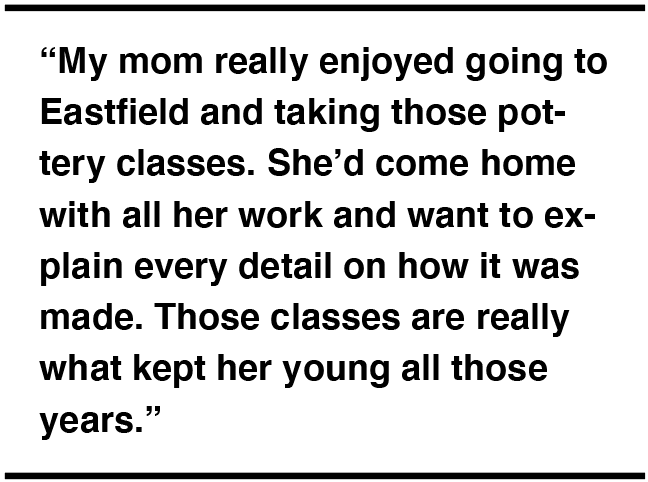 She drove herself to school and brought all her materials up to Eley’s classroom every semester.

“She was such a tiny lady,” he said. “She had to be only 90 pounds soaking wet, but I always heard the thud of those boots and knew it was her coming to class.”

She would come to class, set up her materials and pull out her snack from Subway. She was a woman of routine and had her snack right when class started.

Hutchinson chose her friends carefully, so it took Fulton a while to get close to her, she said. But once they became friends it was all lunches and art shows.

“I’d pick her up and as soon as we’d step into the art show she’d know 90 percent of the people there,” Fulton said. “Everyone just loved her.”

One of Fulton’s fondest memories of Hutchinson is when they ran into each other one afternoon at Target.

“I went to Target one day, and it was rainy and miserable outside,” she said. “I was just about to leave when I saw little Jane walk in with her head bobbin’ and a big smile on her face. I never knew what made that woman so happy on such a dreary day, but it still makes me giggle thinkin’ about it.”

Mickey Bruce, a former Eastfield student and studio technician, met Hutchinson shortly after she’d completed her chemotherapy treatments in 2003.“Her hair was really short, but she kept a braided rat tail,” he said. “It took her years to finally cut that thing off.”

Hutchinson would go see Bruce when he sold art pieces just to give him a hug.

They also often got together at Bruce’s home to talk about art and family.

“Jane was one of the people that I looked forward to seeing,” he said. “She embodied qualities that I look up to such as the commitment to learning, creativity, love and life.”

Romero said she thought her mother had more of a social life than her.

“I’d call and try to get ahold of her, but she was either out eating with a friend or at an art gallery,” Romero said. “She was always at a Mexican restaurant having enchiladas and a margarita on the rocks.”

Romero said Hutchinson saved just about every piece she made in ceramics class and gave some away to her grandchildren as birthday or Christmas presents.

“My mom really enjoyed going to Eastfield and taking those pottery classes,” she said. “She’d come home with all her work and want to explain every detail on how it was made. Those classes are really what kept her young all those years.”

Hutchinson is the daughter of Thomas and Ruth Ross and was born in Montezuma, Iowa. She is survived by her three children, Joan Eyre, Donn and Susan Romero; four grandsons; and four great-grandsons.

Hampton remembered for hospitality, charitableness, Eastfield holding celebration of life in her honor

Joe Martinez is a theater major and is currently the president of the Performing Arts Society, a club in which theater take the main stage. He sat down with reporter Manuel Cruz to discuss more […]

Stimulus checks arriving but not for all

By ELIJAH DELGADO and SKYE SEIPP @TheEtCetera Many college students won’t be receiving the $1,200 stimulus checks from the IRS meant to give aid during the coronavirus pandemic. People ages 19-23 who are claimed as […]

By HARRIET RAMOS @HarrietRamosETC At 27 years of age, Estefani Ramirez already owns her own home. She holds a master’s degree and plans to pursue a doctorate in education next year. She is employed as […]