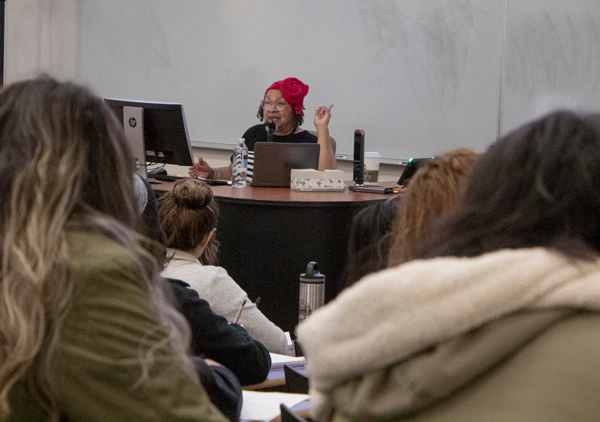 District faculty member Janice Franklin gives a presentation about lynching and growing up in the South during segregation in C-297 on Feb. 13. Photo by Baylie Tucker/The Et Cetera

One of Janice Franklin’s most vivid memories is the smell of burning flesh.

She was just a child living in east Texas in the 1950s when Ku Klux Klan members set fire to her neighbor’s home in the middle of the night. Her father grabbed his gun to protect Franklin and her mother as they sat watching the house burn down, listening to the voices of the people inside as they were burned alive.

“It’s a smell that you cannot forget,” Franklin said. “We should be able to live and die without ever smelling that.”

It was a regular occurrence in the Jim Crow South for Klan members to burn people’s houses down.

“It is not normal for a 5-year-old child to have seen that,” Franklin said. “Except, it is when you were living in the South as a black person.”

Franklin, who has been a full-time Dallas County Community College District faculty member since 1993, presented “Shotguns, Sheep and Sheets” on Feb. 13, as part of the college’s Black History Month celebration.

“The sheep are the Ku Klux Klan members riding around at night setting fire to people’s houses,” she said. She calls them sheep because they followed others into those actions but did not want to be considered responsible because they weren’t the ones who initiated it.

Franklin said parents who went to sleep at night anticipating that someone might attack them often slept with a shotgun nearby.

“The attitude was, ‘Yeah you burned my house down, but you know what? You’re not going to live to see another day so we’ll both be dead tonight,’” she said.

In July 2018, Franklin and Eastfield history professor Liz Nichols went on a journey to see the National Memorial for Peace and Justice in Montgomery, Alabama.

It is the nation’s first memorial dedicated to the legacy of enslaved black people, people terrorized by lynching, segregation and much more.

Franklin and Nichols visited the memorial to gain as much knowledge as possible about America’s black holocaust. During their trip they hired a docent to provide support and additional context while going through the museum.

“Before this memorial, aside from what some cities and counties may have, there is no remembrance of these people,” Franklin said. “This shows what we as people think is important.”

Nichols described her experience on this trip as life-changing.

“The unplanned organic encounters I had with strangers is something I’ll never forget,” she said. “We talked to people that knew women who are related to Rosa Parks, listened to people sing in the museum and so much more and none of it was planned.”

[READ MORE: MLK’s protégé to speak on campus about voting]

During their pilgrimage to Alabama, Franklin and Nichols visited other places as well, such as the Dexter Avenue King Memorial Baptist Church, the church Martin Luther King Jr. was a pastor at and The Legacy Museum: From Enslavement to Mass Incarceration. The two also walked on a cobblestone road that had been laid by slaves.

The lessons learned and information gathered on their pilgrimage and Franklin’s own personal memories from her childhood are what helped her put together her presentation.

She talked about lynching, hate groups that still live today and the terror that African Americans lived with.

“The population “otherized” African Americans,” she said. “They weren’t even considered fully human. They were called creatures and beasts.”

The Hanging Tree in Center, Texas is a historical tree that was used for hangings and spectacle lynching. In Texas, court-ordered hangings occurred between 1836 and 1924 and were administered by the county sheriff.

Spectacle lynching was when someone would take a photo of the lynching site and send invitations to people so a crowd would show up. The purpose was to humiliate and torture those being lynched.

Gavels were made from the wood of the hanging tree and are still being used in Center courtrooms today.

America’s first spectacle lynching was in Paris, Texas on Feb 1, 1893, when 10,000 spectators showed up which Franklin said meant the whole county was attending. The victim was Henry Smith, a 17-year old mentally challenged man accused of the assault and murder of a 3-year-old white child. He was tied to a stake, had his eyes burned out, had a hot iron stuck down his throat cooking his tongue and was set on fire, all while the crowd cheered.

“Do not think that lynching has ended,” Franklin said. “We are going back in the past to the genesis of it, but this continues to this day.”

Its website includes a “hate map” showing where hate groups and their headquarters are located in the United States. The site also includes how many groups are in each state and the names of each group.

“We are swimming in a sea of headquarters of hate groups in this part of Texas,” Franklin said.

Early childhood education major Merari Rojas was moved by the vivid photos and videos shown during the presentation.

“I feel like I understand more now that I’ve learned about the history of lynching,” she said. “It’s incredible and sad. As human beings, we have to understand the history of people who aren’t the same as us and be more respectful to what they’ve gone through or are still going through.”