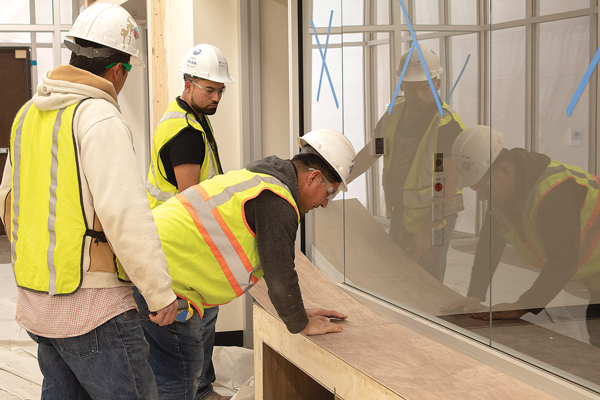 With construction projects nearing completion, others such as the Performance Hall and the coffee shop have yet to begin. 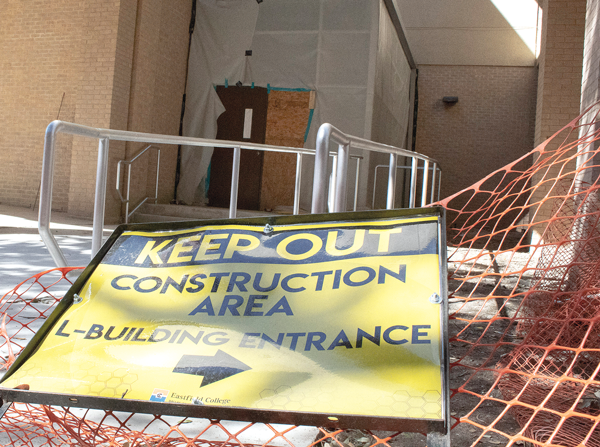 The mechatronics lab along with a computer information technology lab is said to be completed in L Building by March 26. Photo by Baylie Tucker/The Et Cetera

The construction on campus has been going on for a while now. The portable and L Building are nearly done. Labs in S Building trail behind with unisex bathrooms located in F Building and renovations on the Performance Hall are set to begin in March.

Facilities director Michael Brantley says that the L Building construction is on schedule and is about 90 percent complete with an expected completion date of March 26th. A mechatronics lab is being added to this building along with a computer information technology lab.

All classrooms, offices and the community space are completed, and furniture was scheduled to move in last week. The only remaining thing is the glass in the main entrance, which is awaiting engineering specifications to ensure accuracy.

The portable building located in Parking Lot 6 has four classrooms, two computer labs and two offices. It will be referred to as “E Building”. Brantley said that the building is furnished and should be ready for use during the second eight weeks.

The S Building is about 70 percent complete and Brantley attributes that to case work that is still being done.  Most of the work is being done on the third floor, but it has displaced some of the labs on the second floor as well.

“It’s a very sophisticated lab when you talk about infrastructure,” Brantley said. “It’s going to be great for the students.”

A chemistry lab will fill the space of a former classroom and administrative offices. Those offices were relocated throughout campus and the wall that connected them has been knocked down to make the space larger.

Technical director Lori Honeycutt said that Performance Hall renovations have been a long time coming. Even though the construction will displace performances, the changes are necessary.

“It was a decision I made knowing that we would have to find places for our performances,” Honeycutt said. “But I didn’t want them to try and do everything in only a matter of two months.”

Changes to the Performance Hall involve both front of house and the stage side. All the chairs are being pulled out and replaced, lights are being installed under the chairs, center aisles are being added and the floors are being leveled to increase safety for those in the audience.

All electrical equipment is being replaced and motor assists are being added on the electric line sets. The rigging is being overhauled and redone because it hasn’t been updated since the early ‘90s, according to Honeycutt.

“This is all stuff that has to happen,” she said. “I don’t know why it took so long, but we’re all ready to do it.”

The Performance Hall will close on March 13 and reopen in late August. Performances will be relocated which means the spring dance recital will be in the Hive and the 24-hour play festival at the Mesquite Community Theatre. 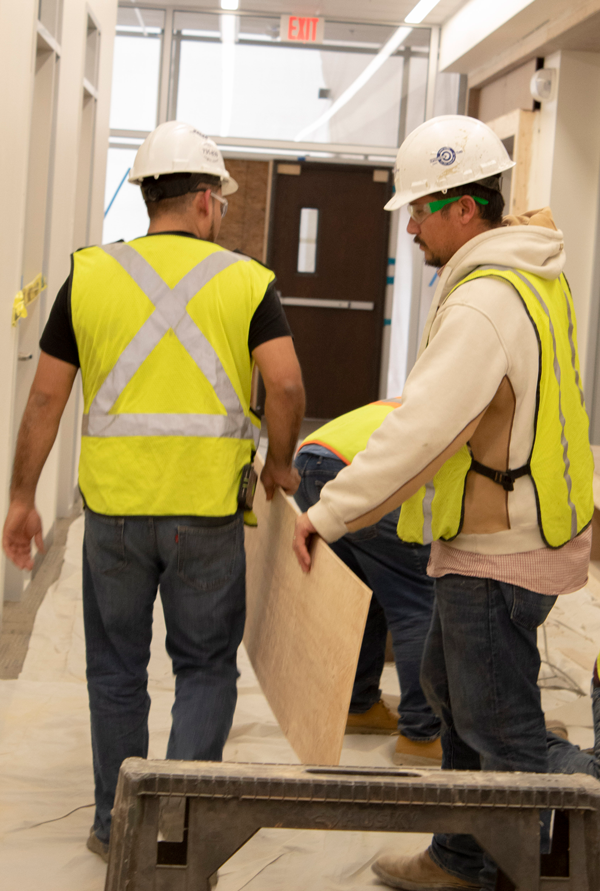 Outside of the Performance Hall unisex bathrooms are being built, which Brantley says are at 60 percent complete. The bathrooms will have four individual stalls, baby changing stations and sustainable hands-free fixtures.

“These bathrooms are definitely a way for Eastfield to be more inclusive,” Laramie Patton, 22-year-old marine biology major said. “I’m really excited about it.”

With the elevators being down, inclusivity is a problem for many students here at Eastfield. Brantley said the college was receiving complaints nearly every day about the functionality of the elevators. He says they shut down the elevators because they weren’t safe.

“Our priority is the safety and concern of our community,” Brantley said. “We want them to have the confidence that the elevator will go to each floor without a problem.”

He said with the One College initiative, all the elevators will be repaired but the two in C Building that are currently out of service take precedence.

“We are not going to compromise the safety of our community just because it’s an inconvenience,” Brantley said.

The coffee shop that was previously reported to be completed by this semester is now back on track, Brantley said, after being off track for about a year. Last fall, it was reported that the shop would be done by spring 2020 and in spring 2019, administrators said it may be done by fall 2019.

Brantley said the design is now at 100 percent. The request to operate the shop and the bid for construction will be out to the public by April. Once the bids are in and the construction firm has been vetted, construction plans are set to begin as early as mid-June.

Tutoring services manager Anand Upadhyaya would prefer to wait until the end of the semester to begin construction so that students will be less impacted by the noise and distraction of building.  Upadhyaya said that tutors along with the librarians petitioned for the delay and were told yes.

“Our main focus is the students,” Upadhyaya said. “We don’t want any construction anywhere on campus to impact their learning.”

Upadhyaya said that with the newly announced One College consolidation that these plans could have been delayed.

Despite this, Brantley assures that everything is on track.

“There are no delays on any of the projects,” Brantley said. “They are all pretty much on schedule and should be ready before fall, even summer.”