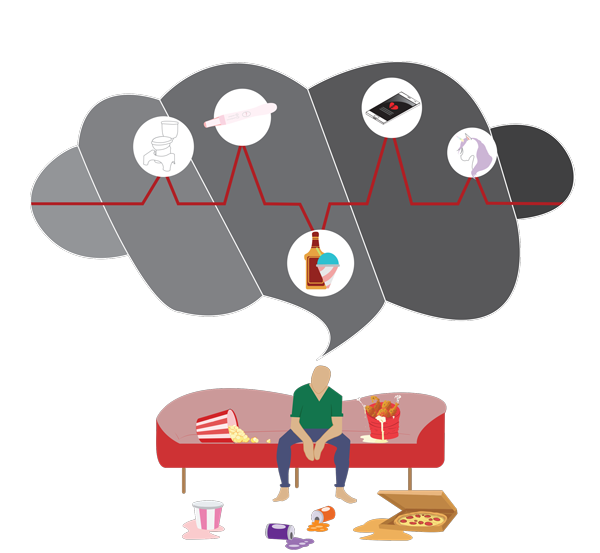 I’ve had the pleasure of knowing some extremely interesting, yet unstable people. Some made me laugh, some made me cry, some even made me bleed. From the unusual combination of snapchat models, bartenders and church girls, I’ve acquired an eclectic education when it comes to all things kooky and downright weird. We don’t choose the memories that stay with us. These are a few of the lessons I never expected to learn.

Ladies and gentlemen, allow me to introduce: the Squatty Potty. I was introduced to this basic yet weird little contraption upon first entering an ex’s apartment.

I must have stared at this weird little stool in front of the toilet for a solid 3 minutes the first time I used her bathroom. I simply couldn’t understand what it was, and my curiosity was getting the better of me. I had to ask, although I wish I hadn’t.

According to the official twitter page, “Squatty Potty is the original toilet stool designed and made in the USA to give you the perfect posture for optimal elimination.” It certainly helped me eliminate myself from the apartment.

How to Abandon Trust

It all started when an ex called me up after we hadn’t spoken in almost six months. Within 15 minutes of her stepping foot in my home, she proceeds to tell me that she’s pregnant and that it’s mine.

I  should have immediately jumped in the car and gone to buy a pregnancy test, but my head was swimming with questions. My gut told me she was lying, but I couldn’t think clearly. I’d always wanted to be a father, but not like this and certainly not with her.

What followed was the two-month process of having my heart put through a meat grinder. I’d make doctors’ appointments only to have her cancel 20 minutes prior. She would lie and say that she’d gone to appointments without me. She’d even give me due-dates that she made up herself. When I finally got her in for a sonogram, her story fell apart.

As the nurse pointed to the empty sonogram images, she wouldn’t even look at me. She completely ignored the sound of my heart breaking in the corner.

During that long drive home, I learned how to crumple my trust into a little ball as I threw it out the car window. After that simple act of metaphorical littering, I still don’t trust anyone.

[READ MORE: Don’t lose your identity for a relationship]

I learned this little trick during my misspent youth. I was 17 and in love for the first time. This was just the tip of the snow cone when it comes to the stupid things we did together.

It was a summer day, Bahama Bucks was calling our names as we sat around a friend’s house and wondered what to do with this cheap bottle of vodka we’d gotten our hands on.

Then an idea was whispered from the tobacco stained lips of an underage smoker. “Mix the booze with the Bucks,” said my ex. Dear lord, I’m happy that we did. The pure sugar removed the burn of the cheap booze to the point that we couldn’t even taste it.

Drunk and in love, what a wonderful way to spend a hot summer’s afternoon. Enjoying responsibly and within legal age, of course.

How to Know When to Walk Away

One of my longest relationships should have ended in less than six months, but I was an idiot with a weakness for a slim-waisted blonde. When first we met, she was actually my boss at an old job. We went out once and that was it.

We were joined at the hip thereafter. We weren’t exactly the most compatible people, but in some weird way, we were comfortable around each other.

I’d read novels and she’d work on her book of crosswords. It was probably the calmest period of my life and I didn’t want to give that up.

After six-months, we went out of town to attend a friend’s wedding. Later that night as she slept in the hotel bed, an app on her phone kept going off and I couldn’t sleep.

I’m ashamed to say it, but I looked at her phone. What I found was obvious. She’d been unfaithful, and this dude had been messaging her the entire day. I felt like a complete and total idiot.

As we fought I could feel my heart dancing in my stomach while my lungs struggled to take in air. In the end, we decided to stay together.

For the next two and a half years I couldn’t trust a single word she said. I turned into the type of person I hate. I was controlling, jealous and even spiteful at times. I lost who I was due to my own trust issues.

We were doomed after that night and we should have ended it. After that, we simply wasted each other’s time.

Once upon a time, I thoroughly believed in monogamy. I would spend sleepless nights holding my chest while my anxiety made me question my faith in my partner.

That was before someone showed me a different way.

When I met her, she announced herself as a unicorn and I thought she was making a joke. I later learned that unicorn is a slang term for a single person that’s infiltrated a Lifestyle community, which is essentially a swinger’s community. Many people have a lot of misconceptions about this way of living.

There is actually a great deal of trust and compersion involved.

As I’ve said, I have major trust issues, but I realized that my problem wasn’t the physical betrayal, it was the emotional one.

The beautiful thing about a LS dynamic is that neither party has any reason to lie to one another. To offer your partner complete freedom in return for total honesty was a deal I was willing to make. She was one of the only people I’ve ever met that I’m almost certain never lied to me.

She had her flaws, but she was honest. I have to thank her for that much.

Follow these tips to stay safe in the swiping game