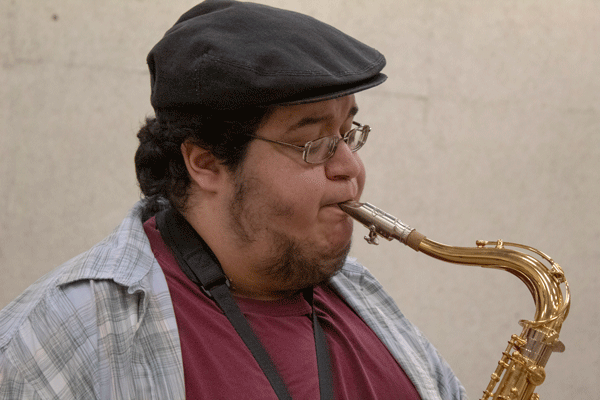 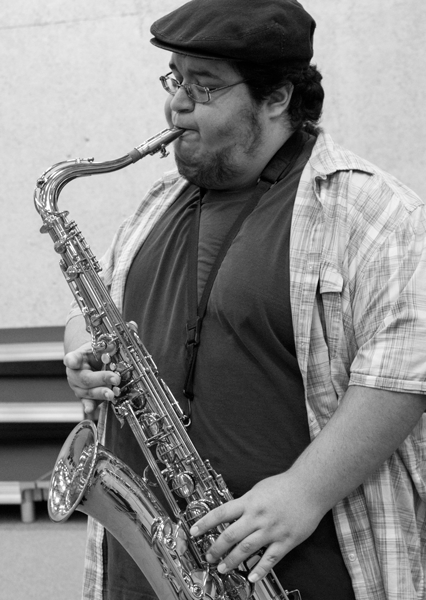 Music Major, Gabe Rodriguez, began pouring himself into learning music after losing his mother. Photo by Baylie Tucker/ The EtCetera

Gabe Rodriguez’s greatest loss has led him to his greatest achievements.

He picked up the bass clarinet in middle school band so he could get out of class for band competitions and field trips.

That changed after his mother died.

He was only a sophomore in high school when it happened. He immersed himself into learning how to play a multitude of instruments including the flute, saxophone, clarinet and trumpet.

“I started learning everything from scratch to distract myself from the loss,” Rodriguez said.

“Losing my mother was a dramatic change. I’m very much a man of routine, and I panic when I lack control over the things that are happening to me or around me.”

He hopes to follow in his mentors’ footsteps by becoming a music educator.

His job includes making program pamphlets, setting up and breaking down recitals and monitoring music labs.

At a young age Rodriguez recognized his struggle to “fit in” with others. He enjoyed playing puzzle games and kept to himself.

In one of his favorite games, he would pick two words and figure out the train of thought that connected the two.

“In hindsight, it was a weird game to play,” he said. “Granted, I was very socially awkward as a kid, so I learned to play games by myself.”

Rodriguez has learned how to manage feeling socially awkward over the years.

“It’s not going to get any better unless you work at it,” he said. “Making eye contact has always been a challenge for me, but in music and everyday life you have to be able to have conversations and sustain eye contact, and that’s something I’m still working on.

When Rodriguez first started attending Eastfield, he was eager to learn. Little did he know, his excitement for knowledge also taught his professors some lessons.

“What I’ve learned from Gabe is when students express interest in multiple things, I have to find a way to focus that curious energy into things that are going to be practical for them,” guitar and music theory professor Eddie Healy said. “That way they know things that they can back up with skill.”

Healy said Rodriguez has become a well-rounded musician during his time at Eastfield. He’s learned a lot about the totality of his responsibility as a musician: to become a better player, a better composer, to develop a better ear and to understand more of the tools upon which he can draw when he plays music.

“What sets Gabe apart from other students is that he has learned how to love putting himself outside of his comfort zone,” Healy said. “His curiosity and desire to get better are things that have propelled him to greater heights and will continue to do so.”

Even upon completing his music theory class with Healy, Rodriguez continues to build his skills.

He pops into Healy’s classes from time to time to ask if they’re taking a test, so he can have a copy to freshen his memory. 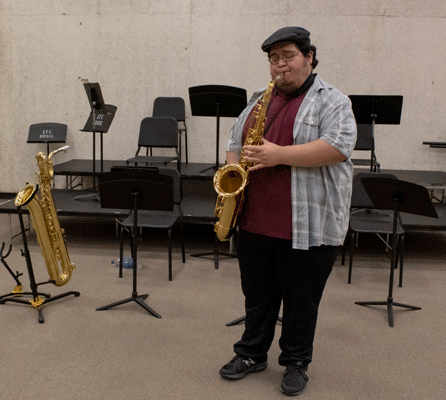 Gabe Rodriguez, a music major, plays his saxophone on Jan. 30 in F-114. He hopes to be a music educator one day and has created a songbook to leave for Eastfield music students. Photo by Baylie Tucker/The Et Cetera

On Dec. 4, Rodriguez played the baritone saxophone for the last jazz ensemble of his graduating year.

Rodriguez regularly battles pre-show jitters that can sometimes be severe, but for this show he was focused and calm, with a confident look in his eyes. He said it was the most comfortable he’s felt performing.

Rodriguez was dressed for the occasion in his posh black pants and shirt, and topped it off with a newsboy cap.

The mood was classy and smooth as the sounds of the instruments produced a funky melody that transported listeners to a dimly corner of a 1920s speakeasy.

The jazz band played a variety of songs including “Isn’t She Lovely” by Stevie Wonder and “Uptown Funk” by Bruno Mars. The performance ended with a standing ovation.

Though he rarely gives himself credit, Rodriguez reminisced on the moments during his time at Eastfield.

“I’d say I’m proud of all of my firsts that happened here at Eastfield,” he said. “For example, I actually wrote my first song that got performed by the band while I was here called ‘Sirena.’”

Last summer Rodriguez created a songbook that he wants to leave behind when he graduates. He wrote 42 songs before deciding he wanted others to contribute to the book so people can see the progression and diversity among the musicians at Eastfield.

“He’s done so much to help students who have not yet progressed as far as he has,” Healy said. “I would love to see him hone those teaching skills and see him as an educator.”

Passley has mentored Rodriguez throughout his time at Eastfield.

“It always helps to see people doing things that you want to do and be mentored,” Passley said. “I think to be successful in anything you need to see it, which is one of the reasons I made him a student worker because I know he has plans to do what I’m doing.”

Passley said he expects to see great things from Rodriguez in the future.

“I encourage him to maximize his potential in the things he likes to do to a high level,” Passley said. “He has shown a lot of resiliency towards things in life that has happened to him, so I know that’s going to take him far.”