Over the hill: Looking back at the changes Eastfield has made over the past 50 years 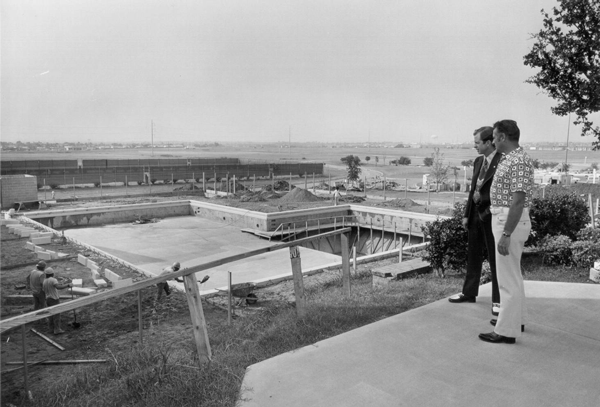 Eastfield’s first dean, Byron McClenney, left, and another man look out at construction of campus in 1970. Photos courtesy of DCCCD

Eastfield College has seen some of the top names in entertainment and politics since opening its doors in 1970. Visitors have included actress Lily Tomlin, comedian George Carlin, the Dixie Chicks, musician John Cage and even President Barack Obama in 2011.

Karla Greer was a student at Eastfield in the ‘70s and saw Tomlin on the Performance Hall stage.

“I loved Lily Tomlin,” Greer said. “She had been on ‘Laugh-In.’ … I was really happy when she came here because she was just as funny here as she was [on TV].”

Greer graduated from Skyline High School in 1975 and was a student at Eastfield until spring 1978, when she transferred to Texas Woman’s University to pursue a degree in library science.

She began working for the library almost immediately after enrolling and is now Eastfield’s executive dean of academic support as the college prepares to celebrate its 50th anniversary this year.

The anniversary will feature events throughout the year, including Founders Day on April 3, a float in the Mesquite Rodeo Parade on April 4, a 5K run May 30, a golf tournament Oct. 2 and a gala party Nov. 12. Eastfield is also trying to raise $50,000 for scholarships and student programs. 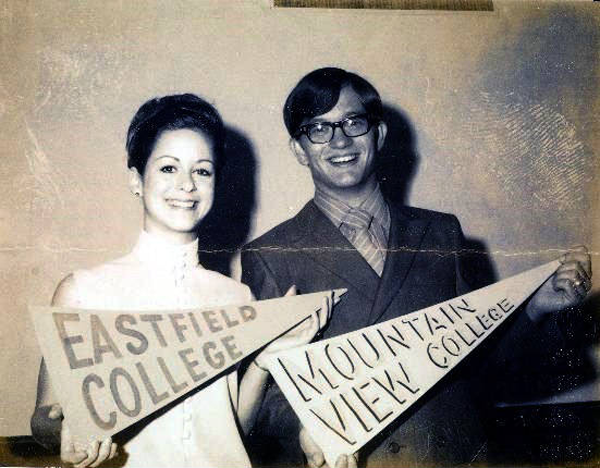 The land Eastfield was built on was bought by the Dallas County Community College District for $970,552 in 1966. It was previously farmed by the Motleys, and their family cemetery remains on the campus grounds.

Two years after opening, the college was bathed in political activity. The 1972 presidential race between Richard Nixon and George McGovern was heating up, and political officials and candidates regularly visited campus to speak to classes and larger groups of students.

“It looked an awfully lot like the democratic process at work,” said Jerry Henson, a former Eastfield administrator who wrote “The Person-Centered College,” a history of the college published in 2000.

Some of these visitors included Texas’ only female member of the state Legislature, Frances Farenthold, and Myrlie Evers, widow of murdered civil rights leader Medgar Evers. They came to campus in February 1972 to push for the involvement of women and minority groups in politics.

Many students who attended these political events and visits were visibly opposed to the Vietnam War. In fact, many of the students had fought in Vietnam. They came to the college as part of the GI Bill.

Before she became the library administrator, Greer started out as a work-study library aide and has worked in nearly every position the library offers, from the circulation desk to evening librarian.

“I started here after high school and within a month or two, I started working in the library as a work-study student,” Greer said. “So, I’ve been here, even in the library, forever.”

Eastfield had a designated time that did not conflict with classes for clubs to meet and students to socialize from noon to 1:30 p.m. on Mondays, Wednesdays and Fridays for many years, according to Henson’s book.

When not in classes such as sociology with professor Jane Penney, Greer liked to hang out in the Pit (now called the Hive) with friends and classmates.

It was popular to go there to socialize and smoke cigarettes, back when smoking was allowed on campus grounds, she said. The Pit was filled with cigarette smoke during the activity period.

Smoking was eventually banned on campus because of the burn marks left on many of the chairs, tables and on the railings on the second floor of the C Building. Some walls around campus had to be repainted because of the stains as well.

Students would go to the Pit during activity period and play card games like spades and rummy. If someone was playing a game and they had to leave for class mid-game, somebody else would swap in for them, keeping games going for hours and sometimes days, Greer said.

There was also a student lounge with a pool table, arcade games and game consoles, and materials for crafting and working on school projects, although Greer said she rarely used it. 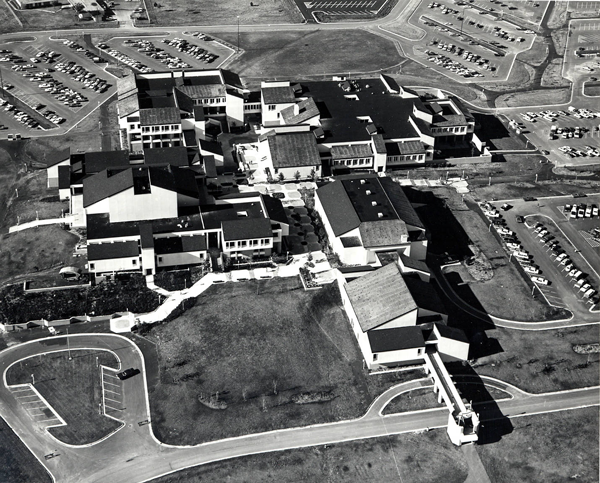 Aerial photo of campus in 1971. Photos courtesy of DCCCD

When the activity period was discontinued, economics professor Bob Felder said there was a noticeable drop in student engagement. Felder said that while he misses the activity period and believed that it helped students stay active on campus, it would be quite the challenge to implement today. Felder is one of four faculty members who have worked at Eastfield since its opening.

“I had my eye on Eastfield even before it was constructed,” said Felder, who was hired at El Centro in 1967 and transferred to Eastfield upon its completion.

Originally from East Texas, Felder had taken a short break from teaching but wanted to go back to his favorite profession at a community college. When he heard about Eastfield being constructed in the late ‘60s, he specifically applied to El Centro to have his foot in the door to be hired at Eastfield.

During Eastfield’s first semester in fall 1970, many buildings and offices were still under construction.

Felder said that even with the problems created by the unfinished campus, he and other faculty loved it at Eastfield because it was new, exciting and it felt like a real person-centered community.

“When you say person-centered, that includes everybody,” he said. “The student body, the faculty, maintenance, administration, everybody.”