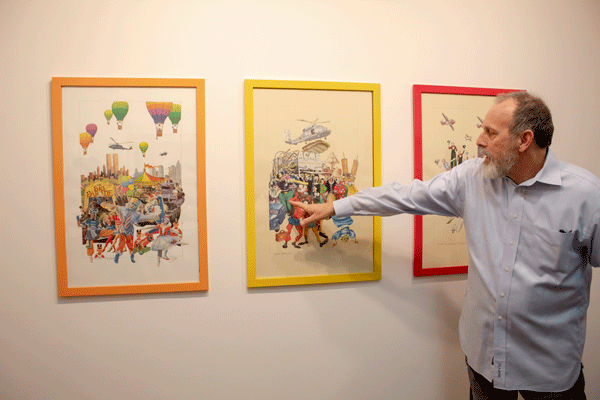 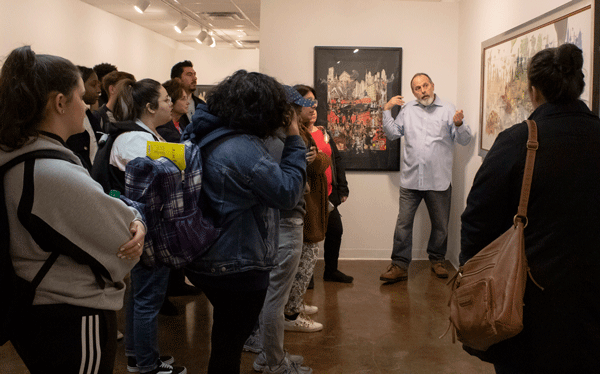 A group of people listen to Paul Greco describe his artwork and creative process for his “Social Intercourse” in Gallery 219 on Jan. 23. Photo by Baylie Tucker/The Et Cetera

Greco says he will work on a piece for a month to four months straight in his studio, which is stacked high with bins containing the cut paper images, all organized by their characteristics.

Greco is partially colorblind. He has a harder time determining warmer tones like red, leading him to a more unique approach to layering pieces in his art.

“I go by … values more than anything,” Greco said. “I can really tell the color more by its value than by its actual color.” 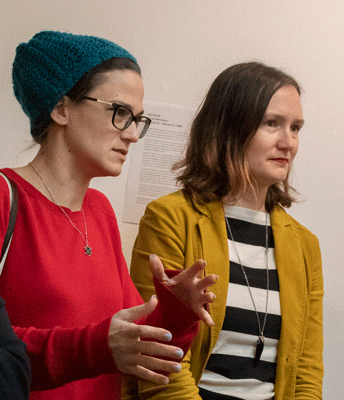 Tesa Morin, right, stands next to Caroline Cagle, who is asking Paul Greco about one of his pieces in “Social Intercourse” during his visit to campus on Jan. 23. Photo by Baylie Tucker/The Et Cetera

Value is the lightness or darkness of a color, allowing it to appear brighter or deeper.

Greco uses intense and divisive color schemes, as well as deeply emotional historical portrayals both past and present.

The pieces, such as “Arctic Seals Greeting Polar Bear Refugees, Hudson Bay 2020” and “Close Encounters of the Third Kind” involve divisive topics such as global warming and Nazism.

Iris Bechtol, gallery director and adjunct art professor, said the pieces are controversial but important for viewers to help open their minds.

“I think they’re very powerful when one really attempts to engage in the visual imagery of them,” Bechtol said. “I wanted students to see the possibilities of utilizing paper cutouts from other sources to create a rich narrative that illuminates socio-political issues that affect us all.”

While these topics can seem abrasive, Greco said that he draws inspiration from the real-world experiences and trauma he faced as a retired Houston Fire Department paramedic. He mentioned during a lecture at the gallery opening that he suffers from post traumatic stress disorder.

“Anything with prejudices and discrimination always shows in my work,” Greco said. “A lot of it is just seeing everybody’s struggles and seeing how people are working really hard. I’ve seen that. I have proof of that. So that’s probably one of my biggest drives.”

One of Greco’s pieces, “The Color Purple,” depicts loveable Sesame Street characters and Muppets helping firefighters drench a burning building with a hose, while other characters further from the building go about their lives, smiling and waving at the viewer.

Abraham Mendoza, a student who viewed the exhibit at the opening, said he found the pieces layered with meaning, especially considering Greco’s choice of materials.

“It’s amazing how many messages you get and how vivid those messages can be,” Mendoza said.