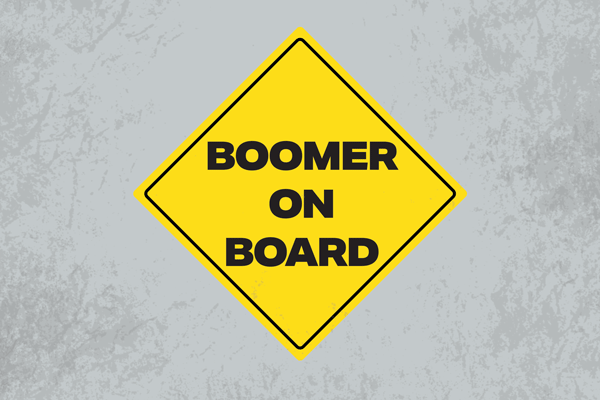 OK, boomer. We get it. You’re grumpy and old and we’re walking around changing the status quo. We’re living our best lives without feeling the need to put down the younger generations.

We aren’t perfect either, but enough is enough. We’re tired of constantly being referred to as “kids these days,” and now we’re biting back. Not with anger or shouting, but with two simple words: OK, boomer.

The phrase rose to viral fame this fall after a video on the social-media platform TikTok showed an older man going on a rant about millennials and gen Z-ers having “Peter Pan syndrome” because “they don’t ever want to grow up.”

The other person in the video, either a millennial or Generation Z-er, responded by writing “OK, boomer,” on a piece of paper.

“I like [OK, boomer] because it gives us a way to kind of stick it back to the older generations who always belittle us millennials,” 26-year-old biology major Darius Carr said.

The video resulted in thousands of teens and young adults adopting the phrase.

It’s used as a response to the older generation when they are condescending toward millennials, Gen X and things that matter to them.

While giving a speech on climate change, 25-year-old New Zealand legislator Chlöe Swarbrick went viral after being heckled by an older lawmaker and responding with, OK, boomer.”

While some boomers have embraced it, others have taken major offense to the phrase. The latter reaction is ironic as boomers usually refer to millennials and Gen Z as “snowflakes” or the “participation trophy generation.” OK, boomer; don’t let words hurt your feelings.

This generational clash seems to be a cycle that we are doomed to repeat.

“It’s not funny to me, but it’s just, it’s generational. I did the same thing but with different words,””boomer Catherine Lydon said. “We just didn’t have the internet to spread it.”

The genius of this phrase is that it applies in most situations when there is a clash of young versus old. It’s essentially a giant eye roll.

The simple response shows how exhausted the younger generations are with the never-ending debates with elders.

The thing about this sort of generational debate is that it’s not just with boomers and millennials.

For ages elders have complained about the younger generations. The complaints are almost always things such as the youth are lazy, entitled and self-serving.

Our elders blame us for problems as if we are playing on the same level field as they did. Everything is more expensive now from homes to cars to even an education, and boomers shame us for going into debt for that. However, according to them, it’s our indulgence in Starbucks, avocado toast and cellphones that’s to blame. OK, boomers.

“It’s an ongoing thing in society. Every generation has always talked about how great the other generations before them have been. ‘Oh wow, these kids today are the worst,” sociology professor India Stewart said.

Boomers disliking millennials isn’t a one-sided issue, as millennials share the same feelings of disdain toward both boomers and Gen X-ers.

So, where does this sense of superiority stem from? It appears with every incoming generation. There is more competition for jobs, power and attention. As Homer wrote in “The Iliad,” “And so with men: As one generation comes to life, another dies away.”

Baby boomers grew up in a completely different society. While older generations were able to get summer jobs to pay for college, younger generations have to take on massive debt to pay for higher education.

So, yes, I’m choosing to live with my parents longer, wait to own a house or car, get married and have kids, if ever. If anyone wants to bash me for not living up to their ideals, well then to that I say: OK, boomer.

—Hunter Garza is a staff writer and public relations major