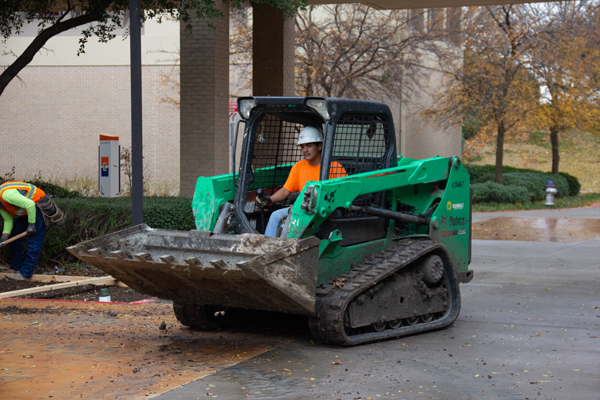 A construction crew member works outside of L Building on Nov. 26. Eastfield currently has multiple construction projects taking place, including working in the S and L Buildings, portable buildings in Parking Lot 6 and the coffee shop in the library. Photo by Rory Moore/ The Et Cetera 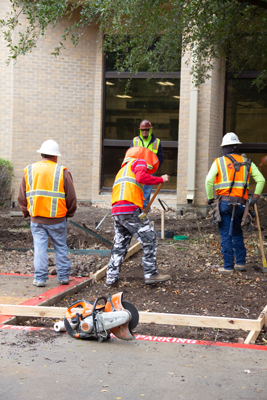 Construction projects across campus are inching to their completion dates, while the proposed coffee shop in the library has yet to secure a vendor.

The projects include new labs for the Science, Technology, Engineering and Math division, the coffee shop at the intersection of L and F buildings, portable buildings in Parking Lot 6 and the mechatronics lab in L Building.

Work in the S Building is funded by the $4.5 million Hispanic Serving Institute STEM grant that was awarded four years ago.

Director of the STEM Academic & Student Success Center Paula Guidry said it has also given students the opportunity to gain field research experience by traveling and provided new equipment for some of the labs.

The equipment includes a Fourier-Transform Infrared Spectroscopy, a Gas Chromatography Mass Spectrometry, a High-Performance Liquid Chromatography, and an Atomic Absorption. A Nuclear Magnetic Resonance will be added in the future.

Four new STEM labs will be built, three at the main campus and one at the Pleasant Grove campus.

The main campus is getting a new chemistry lab in S-212, a physics and geology lab in C-317, and a computer information technology lab in L-313.

The new chemistry lab requires plumbing and air handling work to support the large size of the lab. The construction has led to the first floor of the S Building being blocked off and any labs located on that floor.

The chemistry lab is expected to be completed by Jan. 21, according to Guidry.

“We’re working with our contractor as best as possible to meet that schedule,” Guidry said.

It was originally reported by The Et Cetera in Nov. 2016 that construction for the chemistry lab would be completed in spring 2018.

The physics and geology lab do not have a set date yet, but Guidry is pushing for some time in the spring semester.

Construction in the CIT lab is complete. Computer and equipment are being purchased for the lab, and the only things missing are data lines, Guidry said.

The coffee shop expected to be in the library has not begun construction and a vendor has yet to be chosen for it.

The design is 100 percent complete, however, according to Facilities Director Michael Brantley.

Yet one of the things he thinks should be emphasized is the small size of what he calls a “coffee bar.”

“The coffee shop is really a bar,” he said. “It’s not like Subway where you go sit down… It’s not this big space. … It’s only about 370 square feet. … It’s really a small footprint.”

Brantley said he was worried because some people have voiced concern about the space that would be taken from tutoring services.

“We anticipate if a tutoring need is necessary, we won’t do something where it causes that to be a problem,” Brantley said. “If it does, we will fix it. We’re not going to say, take a space and say, ‘well, there it is.’”

Permitting problems with the city — which have interfered with construction of the portable in parking lot 6 — have been dealt with. Construction should be complete during the first eight weeks of spring, Brantley said.

Power is already up in the building, but two more classrooms are being added and an administrative office.

The portables are essentially to help with getting people somewhere to go if remodeling needs to be done in another part of the building.

“[Since] programs are expanding, we need a place to go,” Brantley said.

He said the construction in the L Building for the mechatronics program is 85 percent complete, also adding that the furniture is already here.

“It took a long time to get to where we are,” Brantley said. “But we’re there.”