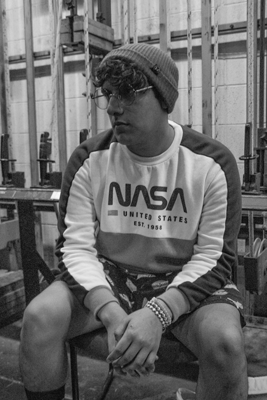 Joe Martinez, a theater major, has been at Eastfield for three years now. He’s acting in the production of “Augusta and Noble,” which opens Nov. 14. Photo by Anthony Lazon/ The Et Cetera

Joe Martinez is a theater major and is currently the president of the Performing Arts Society, a club in which theater take the main stage. He sat down with reporter Manuel Cruz to discuss more about his life and the arts.

What is inspiring you at the moment? 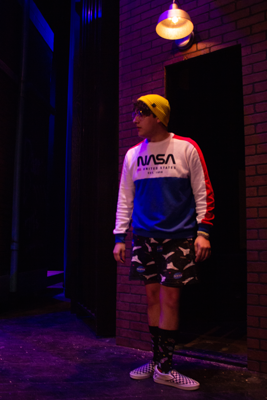 Martinez hopes to be a small screen actor one day. He said in order to be an actor you have to be “as diverse as possible.” “You have to be courageous enough to try something,” he said. Photo by Anthony Lazon/ The Et Cetera

I’m Hispanic. My dad is from Mexico and my mom was born in America but lived in Mexico with her parents. There’s a lot of discussions going on about people from Hispanic heritage, good and bad, and I really felt the need to be part of that discussion. I don’t know everything in the world. I can’t go up to someone and tell them how they should think. But I know with the arts there is a way to sort of display how you feel about a subject without necessarily hammering it into someone. It’s more of a nuance, and it can get people on a more of an emotional level. And I’ve thought about that and how exactly I can portray my background, ethnicity and culture with what I know how to do, which is the arts. This year we are actually doing a show specifically about Hispanic heritage.

Do you feel like there’s a lack of attention when it comes to Latino culture in arts?

In arts specifically, no. In mainstream arts, especially in the United States, yes. There are quite a bit of well-written playwrights and actors, but a lot of the time they don’t focus on Latino culture specifically. They want to write about other things, which is fine. That’s how they choose to spend their time. We just have more Latino artists, which is great, but since there are discussions currently happening, I think it’s important Latino artists use their platform to sort of have a more open discussion about what is going on. A lot of times people will hate things that they don’t know. Humans just naturally fear the unknown. We can use the arts as a way to educate people, so it’s entertaining but focuses on educating that we Latinos are just normal people with our own culture.

A little bit. I’m taking Spanish right now. My mom never taught me, and I hate it so much that I don’t know Spanish. I feel a lack of connection to my roots. I understand it, but I can’t speak back. I don’t have my own voice within my community. So it’s hard wanting to be the voice of the community when I feel like I don’t have my own within it.

Do you think, in the political climate that we’re in, it’s a prime time for the Latino community to really come together and stand up for what they believe in wthin the arts?

Yeah absolutely. I think the arts has always been the way for underdog communities or not-recognized communities to say, “Hey, I’m here.” Like with slavery in America, slaves had music to keep the culture alive. It’s similar with victims of the Holocaust. I don’t remember exactly where I saw it, but I read that kids would come together and perform plays while in the camps and they would write poems so they could have a sense of who they were. And I feel like right now the Latino community is going through a hardship, so I think it’s especially important that we use the things that we do have. The arts are a powerful tool if used correctly. 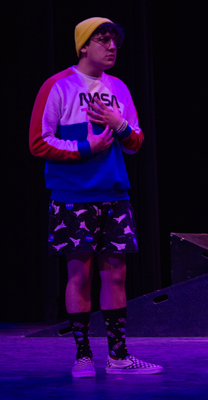 Martinez rehearses his part for the upcoming play “Augusta and Noble,” on Nov. 7 in the Performance Hall. Photo by Anthony Lazon/ The Et Cetera

How did you know the arts were for you?

It’s a lot of hard work, mentally and physically. I’d like to put that out there. But I don’t have as much fun with anything else.

What kind of mentality do you have to have to go into acting?

It depends what kind of actor you want to be. There are different kinds. Most people just try to be as diverse as possible. No matter what show it is, you just have to put in so much work. There’s a lot of character analysis, script analysis and just overall analysis. You have to understand the script and know how to read between the lines. You have to be courageous enough to try something.

To be an actor you have to be courageous enough to put yourself in a vulnerable spot. How do you think that affects someone who has to do it constantly?

That really depends on the person. More veteran actors will usually know how to get around that. Method actors will live their life going through that, and it can be difficult mentally. You have to separate the show and your own life.

Do you think there’s a stigma with actors and mental health, or do you think it’s just an art they can shut down at end of the day?

That is something I think about often because not just actors but artists in general emote their emotions. To be an artist you almost essentially have to be connected to your emotions because that’s what people are drawn to. People want to feel the emotion in your work. Your work won’t work if you’re not showing your emotions in your work. A lot of times there can be a stigma that actors are connected to their emotions too much.

Do you want to be a small-screen actor, or would you prefer the bigger screen?

Probably small screen. Most shows last longer, and you could develop your craft with a character. All the rage is binge-watching shows on Netflix.

Who is your favorite actor?

This is such a cliché but there’s two: Meryl Streep and Viola Davis. I believe they are the strongest actors in our time.

Are you participating in any theater productions this year at Eastfield?

Yes, I’ll be participating in “Augusta and Noble” this November as well as “God of Carnage” in the spring.