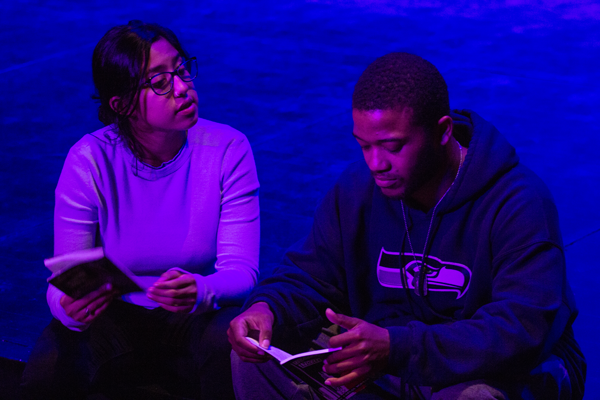 Sandra Cano, left, goes over lines with DeMarcus Davis for their production of “Augusta and Noble” on Nov. 7 in the Performance Hall. The shows first playing will be on Nov. 14 at 11 a.m. Photo by Anthony Lazon/ The Et Cetera 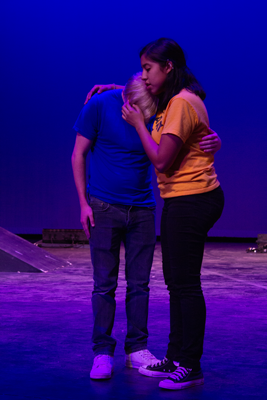 Sandra Cano, goes over a scene with another actor during rehearsal for “Augusta and Noble” on Nov. 7 in the Performance Hall. Photo by Anthony Lazon/ The Et Cetera

In an effort to tackle the current political upheaval concerning immigration the Harvester Theatre Company is presenting “Augusta and Noble” by Carlos Murillo.

Premiering Nov. 14, the play focuses on heritage, struggle and triumph in the face of adversity, from the viewpoint of a child. It celebrates the abundant history and resilience of countless immigrants and their families.

Dusty Thomas, theater director, hopes this eclectic story will shed light on the struggles affecting many students and individuals. She said acceptance is a central theme and that she’s optimistic this message can act as a catalyst for understanding and acceptance both within and outside of the Eastfield community. She believes this production can work as a tool to help people not only embrace their own culture, but the cultures of others as well.

“I’m kind of hoping to open some people’s eyes … There’s a lot of tension and debate, and my hope is that we can make the story personal instead of just about a generalized group of people,” she said. “These are real people. They have real families. They’re here for a reason, to keep their families safe and to protect them. So [I hope] to put a humanized face on the story that a lot of people are living right now.”

In this story we meet young Gabi Castillo, a gifted 12-year-old girl, played by Sandra Cano, as she is beginning school at the illustrious Northside College Preparatory High School, a prestigious selective enrollment institution in Chicago.

Castillo has lived her whole life in the vibrant Latino community of West Town in Chicago.  Once admitted to Northside, she begins a journey of self-reflection about her parents’ dangerous trek across the United States border from Mexico.

During her long daily commute across town to get to school, Castillo is plagued with realistic dream sequences concerning the tribulations of her parents’ exodus. She sees first-hand the struggle her pregnant mother endured and the worry of her father as they’re manipulated by the villainous Coyote as she walks the desert alongside them.

Throughout the story we’re introduced to a myriad of colorful characters that Castillo meets along the way. From the antagonist played by Joshua Campbell, Coyote, whose namesake is both literal and figurative, to the goddess-like protector, La Mujer Azul, played by Sarah Mendez,  which translates to “the blue woman.”

“Coyote, he’s basically supposed to help them cross the desert,” Said Campbell, an education major. “But he’s got malicious intentions.”

According to Campbell, the two characters of Coyote and La Mujer Azul act as the angel and demon on Castillo’s shoulders throughout the play. They’re constantly pitted against each other for control of Castillo’s influence as she tries to make the right decisions in leading her and her family across the desert to safety. 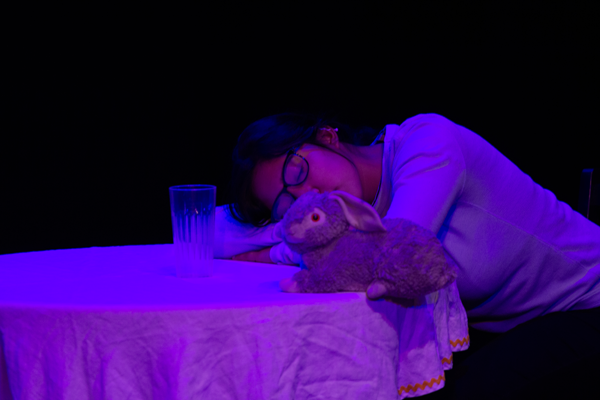 Sandra Cano rehearses her role as Gabi Castillo on Nov. 7 in the Performance Hall. Throughout the play Castillo is going in and out of dream sequences about her parents migration to America. Photo by Anthony Lazon/ The Et Cetera

The story is personal for several cast members, including Cano, who said she wanted the lead role because her mother was deported when she was 11 years old.

Cano herself was not deported, she was born in the States, but despite her citizenship, she had no choice but to go live with her mother in Mexico for about 6 years before returning to the United States 2 years ago. Her mother is still in Mexico.

“[The story] talks about her parents being immigrants,” Cano said. “I was born here. Like Gabi. But then [my mom] left and I had to go.”

Jerremy Alvarado, stage manager and biology major, said some of his family members, including his own parents, have gone through similar immigration experiences.

His parents used a coyote 20 years ago to get here, just like Castillo’s parents in “Augusta and Noble.”

“It hits home, truly,” Alvarado said. “It’s pretty involved in my life due to the fact that some of my family members have gone through that same experience … the struggle of getting here.”

Another cast member has had a more recent and physical series of misfortune. DeMarcus Davis, set to fill the role of Ricardo Wojciekowski, Castillo’s best friend at Northside Prep, was involved in a major automobile accident with an 18-wheeler on the night of Oct. 27.

Cast members said he was released from the hospital a day later but is still suffering from injuries sustained during the wreck. He was even making attempts to attend rehearsals just two days after the accident. Since then, Davis has returned to rehearsal.

“He has trouble seeing out of one eye.” Thomas said. “He limps a little but otherwise he is able to perform his role just fine.”

Thomas said the play will run from 90 to 95 minutes long. She encourages students to come to the evening shows and to bring the whole family. Admission is free.

“College students will enjoy it.” Thomas said. “but there’s nothing in there that you couldn’t bring a child to. … There’s some comedy. There’s some drama. It’s just a really engaging story. It’s a very well-written play, and it’s a lot of fun.”