Not just blowing smoke: Concerns over vaping rise after questions of safety, outbreak of lung disease 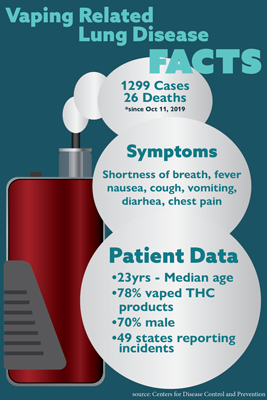 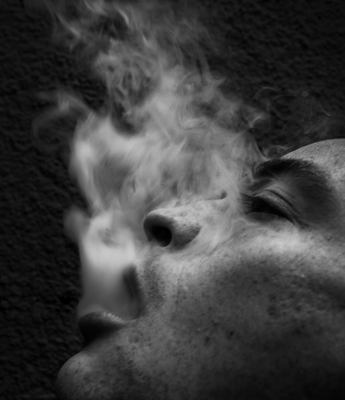 A student exhales a cloud of vapor on campus. Photo by Anthony Lazon/The Et Cetera

According to the Centers for Disease Control and Prevention, there have been 1,479 vaping related cases of lung-injury and 33 deaths in the United States as of Oct. 15.

According to the CDC, the symptoms for vaping related lung disease can most closely be associated with cough, shortness of breath and chest pain. Other symptoms to be mindful of are nausea, vomiting or diarrhea. Along with fatigue, fever and weight loss.

With the rise in national attention concerning the vaping epidemic, the CDC has announced it will be expanding its laboratory testing as it looks for harmful chemicals within vaping products.

In the wake of widespread media coverage, there have been several changes to the law surrounding vaping and some places are considering banning the products all together.

Officials are attempting to instill tougher sales restrictions and declaring an emergency on the grounds of public health in response to the Trump administration’s concerns over teen vaping. Secretary of Health and Human Services Alex Azar announced on Sept. 11 that the Food and Drug Administration is working to outlaw the sale of non-FDA approved flavored vaping products. He claims that tobacco flavored vape products will not be affected.

A Michigan judge halted the state’s flavor ban shortly after it was imposed, saying the potential damage to businesses outweighed the government’s interests in reducing teen vaping.

In the wake of a steady rise in vaping related lung-injury, many consumers of the product are starting to question their decision. In 2012, 46 percent of respondents to the Health Information National Trends Survey, said that they believed vaping was as unhealthy as cigarettes. That number rose to 56 percent in 2017 and is expected to climb.

The sudden influx of vaping-related illness has become such a hot topic that Eastfield made it a central focal point for its Red Ribbon Week kickoff on Oct. 23. Paired alongside a myriad of sobriety-themed activities, the event featured a presentation by Angel A. Vales called “The Vaping Epidemic.”

Vales, the head of the Alcohol and Drug Prevention program with Dallas independent school district, said there is an over-abundance of misinformation concerning the safety of vaping products and their chemical make-up.

“The first thing people should know is that it’s not vapor, it’s an aerosol” he said.

Vales said the presence of water particles and other chemicals in the mixture can lead to negative health issues such as lung-injury and scarring when inhaled. He attributes the base ingredients as the major cause of the problem, more so than the nicotine itself.

However, Vales says that nicotine is a drug and it should be treated as such. He said vape users have become more susceptible to the dangers of nicotine addiction due to the accessibility and convenience of vaping compared to traditional smoking.

“Addiction skyrocketed with nicotine” after the debut of vape products hit the American stage, he said. Vales said the number of minors with access to nicotine products has drastically increased and that nicotine affects [the] frontal cortex development of the adolescent brain. He agrees with raising the legal age of purchase to 21.

“The health issues all started booming in the last three months,” he said. “I think it’s a safer alternative [to smoking,] but I don’t think it’s healthy. … There’s not enough science yet.”

Noel Lorusso, a substance abuse counseling major, said he vaped for about three years as a means to quit smoking cigarettes. He started smoking cigarettes at the age of 12, and vaping helped him to rid himself of his dependency. He decided to quit vaping after three years due to the rising expense. Lorusso occasionally still smokes cigarettes, but no longer on a habitual basis.

“It wasn’t cost affective for me anymore,” he said. “I kept buying mods and juices, and it was just more expensive than buying cigarettes after a while.”

Others believe that the problem isn’t necessarily the product, but the regularity with which it’s used. Much like alcohol, for some people the focus of the argument is on moderation as opposed to over-indulgence.

“I think everything is in moderation, but some people don’t know moderation” El Brent, journalism major and non-smoker, said, “So the more you do it, the worse it’s going to get.”

The convenience and accessibility of e-cigarettes is one of the major contributing factors in the rise of nicotine addiction, Vales said. He claims the temptation to partake in the use of vaping products is too great when weighed against the fact that’s it’s too easy to sneak a few puffs at any given time.

Eastfield student and former smoker Shauna Alvarez made the switch from cigarettes to vaping while in the armed services due to the prevalent consensus of her piers that it was a safer alternative.

“Nothing that you put in your body really is safe nowadays,” she said, “but I do think it’s a safer alternative instead of smoking cigarettes.”

However, the U.S. Army is experiencing the consequences of this issue firsthand. In a statement from the U.S. Army Public Health Center, they confirmed that two active-duty soldiers have been afflicted with vaping related illnesses and are still being tracked. One solder has been treated and released while the other is still undergoing treatment.

One of the biggest concerns  to health officials is the presence of black market TCH and CBD cartridges. These illegal sources don’t report to any sort of standardized or regulated safety guidelines like one would expect to find in states like Washington or Colorado. Independent investigations by news media outlets have found traces of hydrogen cyanide and formaldehyde within the confines of black-market tanks.

These cartridges have largely replaced the traditional methods of marijuana consumption. Whereas pipes and papers where once the standard, now the electronic alternative has risen to the foreground of popularity and demand according to reporting by Rolling Stone.

Campus police say they haven’t had any issues with these tanks on campus as of yet. However, concerns about black-market cartridges are of such a high priority to Dallas ISD, that it’s still a major topic of conversation for Vale’s presentation.

Despite the recent health concerns, the CDC still agrees that e-cigarettes can be an effective substitute for many traditional smokers in their attempts to quit.  According to the World Health Organization, traditional smoking kills 8 million people annually worldwide and according to the CDC 480 thousand per year in the United States compared to the current vaping death toll of 33.

Vaping has still yet to be fully evaluated or approved by the FDA for long term use.