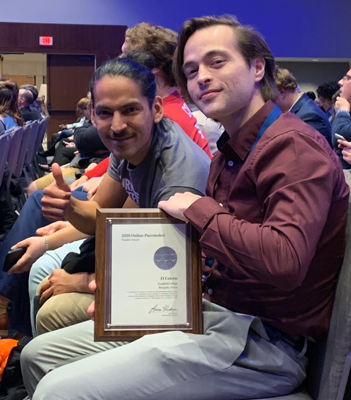 For the first time in its history, The Et Cetera received a Pacemaker award for general excellence in online content at the National Media Convention in Washington, D.C., on Nov. 2.

This marks the fourth Pacemaker, given by the Associated Collegiate Press, The Et Cetera has won in the past eight years. The previous three were for its print edition.

Previous Editor in Chief Aria Jones said it was a collective effort by everyone who contributed last year and that this award reflects the quality of education offered at Eastfield.

“It’s the collaboration we have at The Et Cetera,” Jones said. “Something that set The Et Cetera apart was people’s ability to really work together and think about … how we wanted to best serve our community.”

On top of having an accessible layout, judges also look at the overall content of the website to determine the winners.

Roughly 10 percent of entries end up winning a Pacemaker, according to the ACP website.

Sarah Sheldon, student media manager for The Et Cetera, said the award is a testament of long hours and hard work put in by the staff.

“I’m just one small part of what y’all do, but it’s exciting for me,” she said. “It’s exciting for the other advisers, and I know it’s exciting for you all because while we just offer suggestions on what to do [for improvement], you all [the students] are the ones that actually have to do it.”

On top of winning an online Pacemaker, The Et Cetera was a Pacemaker finalist for its print edition, which is judged on graphics, design, coverage of campus news and strong editorials.

Six staff members were also honored with individual awards from the ACP and College Media Association.

The ACP also judged current publications for its Best of Show category, where The Et Cetera website won first place.