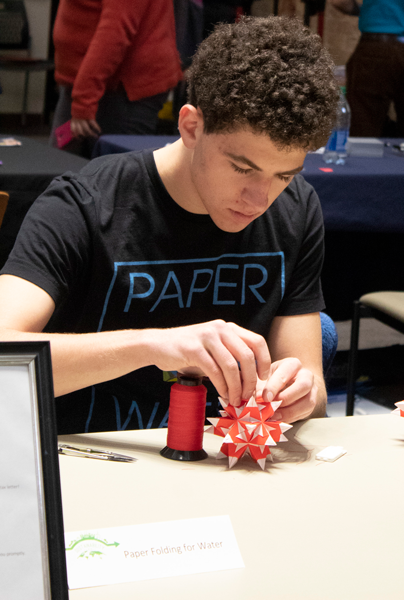 Travis Nolan with the non-profit organization Paper for Water makes an origami ornament at the Sustainability Summit on Nov. 8 in The Hive. Photo by Baylie Tucker/ The Et Cetera

If global carbon emissions are not reduced by at least 40 percent by 2030, the effects will lead to global catastrophe, climate experts predict.

“This crisis that we’re experiencing really gives us the great opportunity to envision what we want the world to look like,” Launius said.

Ian Garrett, associate professor of ecological design for performance at York University, gave the keynote presentation to provide further information on how certain global hardships can be perceived.

Garrett’s speech, “We Made It Up: Creativity as a Driver of Sustainability,” explored several diverse approaches towards a sustainable lifestyle, all with one common idea in place.

Pollution and carbon emissions can all be cut down since we survived without cars or plastic baggies at one point in the past. Lowering waste in these major ways is entirely possible because we invented these polluters ourselves. Garrett said some problems are so complex that their solutions can seem elusive. He said this can be seen through the 17 sustainable development goals, as those are 17 different ways to measure of ecological success.

Some specific sustainable development goals focused on at the event were affordable and clean energy, industry innovation and infrastructure, and sustainable cities and communities.

Susan Alvarez, assistant director for Dallas Environmental Quality and Sustainability, presented a session on resource and energy efficiency, specifically Dallas’ energy and climate initiatives. She says Dallas’ Green Energy Policy, which took effect in April, is the first of its kind.

“We have been on 100 percent renewable energy credits since 2015, but it was basically on a handshake basis, so we were concerned that if we got a new city manager or a new city council that the handshake would go out the window as we tried to negotiate a new power contract,” Alvarez said.

Alvarez said the policy is exploring the feasibility of on-site and off-site solar and renewable energy projects and encourages total self-reliance through solar communities. Separately, the Comprehensive Environmental Climate Action Plan’s purpose, according to Alvarez, is to “improve the quality of life for Dallas residents by creating a healthier and more prosperous community, prepare the community for the impacts of climate change, reduce greenhouse gas emissions and to encourage residents and businesses to take action.”

According to Dallas Climate Action, there will be a 40 percent increase in thunderstorms and 30 to 60 more extreme heat days annually by 2100, as well as a 5-degree temperature increase by 2050.

Aside from the carbon dioxide released from airplanes, Alvarez said, the Dallas-Fort Worth airport became the first United States airport to achieve carbon neutrality in 2016, meaning that it releases no carbon dioxide into the atmosphere.

Chayton Creswell, a 24-year-old biochemistry major enrolled at the University of Texas at Dallas, said he attended the event to get out of his own bubble and learn about the consequences of everyday actions.

“All of my actions have an impact, and it’s important that I do my due diligence to get some sense out of what that means,” Creswell said. “I learned that to generate a shared context of sustainability, you need to ask what’s going on.”

Green Up Your Act: Help make the world a better place by starting at home with these facts and tips