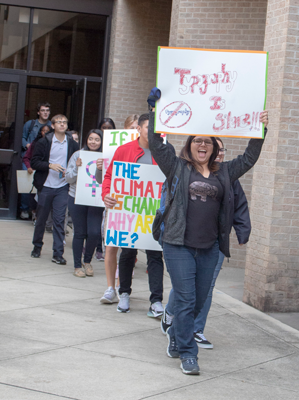 When Joanna Cattanach arrived at Love Field on the morning of Jan. 20, 2017, she didn’t know she was about to help make history. She only knew she was frustrated with the direction the country was 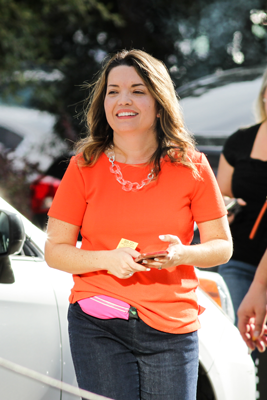 Joanna Cattanach outside of the American Airlines Center at a protest she set up to counter the Donald Trump rally on Oct. 17. Photo by Anthony Lazon/ The Et Cetera

A staunch Democrat, she was opposed to newly elected President Donald Trump’s views on women’s rights and immigration.

But Cattanach didn’t sit on her feelings or wait for someone else to do something. She took action.

On the morning of Trump’s inauguration, the Eastfield adjunct journalism professor arrived at the airport with her pink pussy hat in tow and ready to participate in the Women’s March on Washington. With over 200,000 participants in Washington, D.C., and between 3 and 5 million in sister marches throughout the country, it was the largest single-day protest in U.S. history.

“For me personally, [protesting] is an expression of belief,” Cattanach said. “Not enough people realize the history of that in this country over time and how important it has been for social change.”

The third full week in October is recognized as Free Speech Week across the United States. Protesting is a form of free speech that is protected in the First Amendment. Eastfield conducted its own Free Speech Festival on Oct. 16 that included a mock protest.

In the 1960s, civil rights marches and Vietnam War protests drew hundreds of thousands of people into the streets of Washington, D.C., and across the nation. An estimated 250,000 people took part in the 1963 March on Washington for Jobs and Freedom, where Martin Luther King Jr. gave his “I Have a Dream” speech.

Young people were major players in the protests of the 1960s. The Student Nonviolent Coordinating Committee organized sit-ins at segregated lunch counters across the South. Students at the University of California, Berkeley turned out in large numbers to protest the ban against political activity on their campus, and the Free Speech Movement was born.

Since 2017, our nation has once again seen an upsurge in activism. The protests of today are even larger than their counterparts from the 1960s era, and students are once again playing a key role.

Concern for the environment prompted 1 million protesters to participate in the 2017 March for Science.

The student led March for Our Lives, organized in response to the Parkland, Florida, high school shooting, brought out 2 million people in 2018 to call for stricter gun-control laws. A sister march was held in Dallas.

“Our country is being divided by the current administration,” Cattanach said. “There is a divisiveness in this country that is not bringing Americans together but is putting us further apart, and [protesting] is how we as a country have expressed ourselves during these times.”

Kat Reguero-Vandeventer, a history professor and lifelong activist, said these problems didn’t happen overnight and they aren’t going to change overnight. She has picketed for safe working conditions for migrant farm workers in California, protested Trump’s travel ban against Muslims and participated in the Dallas March for Our Lives.

Reguero-Vandeventer gives her students examples from her own experiences and encourages them to get involved in local protests.

Students who have never participated in a protest were given the opportunity at Eastfield’s Free Speech Festival last week.

“It’s pretty interesting to me because I never speak out,” she said. “You always have your opinion, but you don’t always get to express it in the way that you want to.”

Salazar said she has had previous experience with protests. Last year she participated in a Black Lives Matter protest in Dallas. She identifies as white and Hispanic, but she went to show her support because she believes all lives have value.

“I want a better future for my niece,” she said. “I want her to be able to see that we were on the right side of history. That we were trying to make a change.”

Cattanach said positive changes are happening as a result of the protests that have occurred since 2017. Dick’s Sporting Goods and Walmart are removing guns from their stores. More young people are registering to vote. More women are running for office. The change that is easier to measure for Cattanach is the one she can see in herself. In 2018 she ran for Texas House District 108. Even though she lost the election, she said she is going to run again.

“I went from … watching government happen,” she said, “to saying I want to change it and participate in it.”