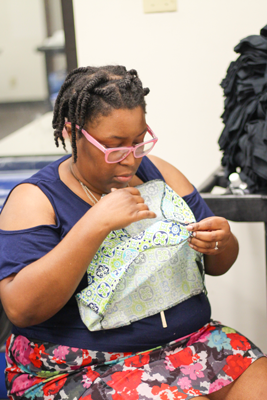 Lacking access to basic sanitation while menstruating is something 2.3 million women and girls must deal with daily worldwide, but Eastfield has been working with Days for Girls since 2015 to change that.

As a nonprofit, Days for Girls gathers necessary supplies for women in developing countries who do not have access to feminine hygiene products like tampons or pads. The organization puts together kits that have a variety of items, for which Eastfield is accepting donations. The kits also include reusable absorbent liners, which people on campus have the opportunity to help make.

Each kit includes 100 percent cotton reusable liners and shields, a size small pair of underwear, a bar of soap and a washcloth.

The Honeycomb Cupboard food pantry is also collecting donations of hygiene supplies for its clients. 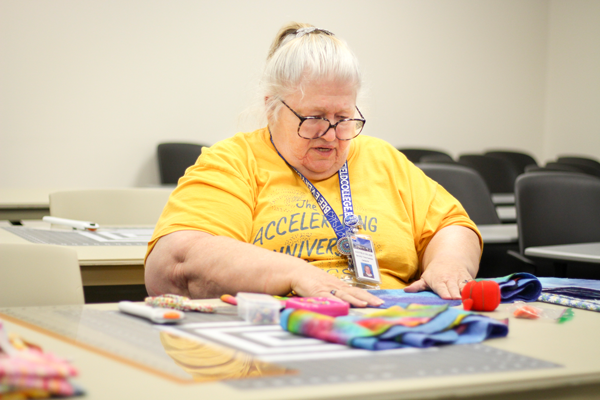 Nurse Nancy Abdo of the Eastfield Health Center said women in the United States may not realize the challenges faced by women in other parts of the world regarding basic hygiene.

“The Days for Girls project was started at Eastfield in order to bring awareness to our students of the challenges that young women are experiencing in many countries where a stigma regarding menstruation still exists,” Abdo said.

In developing countries like Nepal and Kenya, girls are often victimized for this natural bodily function, according to Days for Girls.

“In some countries girls are sent to a barn for a week, or boys will make fun of them because they don’t understand why or what’s going on,” Neff said.

A period can be an uneasy time for any young woman but especially for those in underdeveloped countries, according to the charity SafeHands for Mothers. Not only do periods often symbolize the growth from childhood to womanhood, but in some areas that also means being ready to become a wife through childhood marriage or starting a family after genital mutilation is performed. In other areas, a period also means having to deny yourself an education by dropping out of school.

Girls in some developing countries are made to free bleed, the act of openly bleeding from your period without the use of a feminine hygiene product. Without access to the accessories to help with their bleeding, they are then made to stay home from school during the week of their period.

Day for Girls is a nonprofit organization that gets feminine hygiene products for women in need around the world. Eastfield has partnered with the group to sew reusable absorbent liners. Photo courtesy of Day for Girls

With roughly 180 days of school in a year, this means girls are missing 42 days of school per year, hindering their access to a full education. According to an article written by Nadya Okamoto published through the International Day of the Girl, “Unclean methods of maintaining menstrual hygiene caused by a lack of resources, or lack of education on the usage of products, can lead to infections ranging from skin irritation to something more fatal, like toxic shock syndrome.”

Toxic shock syndrome is a potentially fatal condition caused by the release of toxins in a concentration of bacteria. This is especially common in menstruating women, particularly those using extra absorbent tampons, when the tampon has been left in for longer than eight hours.

A large focus of Days for Girls is education, not only for girls, but for anyone who isn’t informed about the menstrual cycle.

This includes education about how the vagina functions, as well as education regarding the diseases that can occur without the proper toiletries.

“We just go down here to Kroger and buy pads, tampons or cups and don’t even think twice about it. Some people don’t have access to that.” Neff said.

Eastfield’s activities are in recognition of the International Day of the Girl, which falls on Oct. 11. Celia Dolinta, manager of Southeast Women’s Health Clinic, will speak about female hygiene on campus Thursday, Oct. 10 at 11 a.m. in G-101.