Local gem gets back to the grill after rebuilding from fire 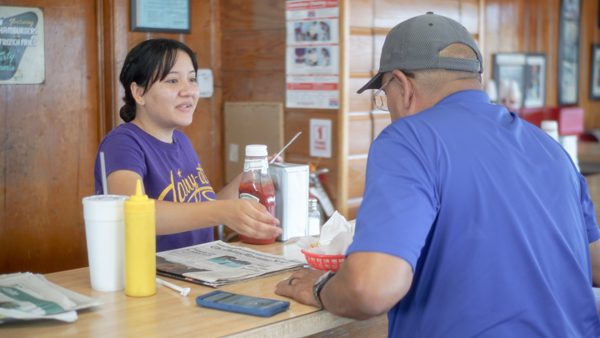 Ximena Espitia, a waiter at Dairy-Ette serves a customer about three months after a kitchen fire closed the restaurant. “It was very fortunate that the whole place didn’t burn down,” owner Bob Prikryl said. Photo by Sirigio Ruvalcaba/TheEtCetera

Business is back to normal at Dairy-Ette, the 1950s- style diner and drive-in on Ferguson Road.

You would never be able to guess from the spotlessly clean wood-paneled dining room and the tan, old-brick exterior that the restaurant was the scene of a fire just a little over three months ago.

Ximena Espitia, a waiter at Dairy-Ette, brings cheeseburgers and baskets of shrimp to customers in the dining area and fills orders at the drive-in. Owner Bob Prikryl goes back and forth between the kitchen and the dining area. He greets customers and fills the ice-cream machine, preparing for another busy day.

Penny Fortenberry and her mother Billie Bard arrive shortly after 11 a.m., accompanied by friends Holly Roberts and Ann Schwartz. They are at Dairy-Ette to celebrate Roberts’ birthday.

As they settle into the booth in the far-right corner and place their order, they talk about Bard’s 88th birthday party. It was scheduled to take place at Dairy-Ette on May 30 but had to be relocated because of the fire early that morning.

Fortenberry had spent the evening of May 29 at Dairy-Ette, decorating the dining area with 50s- themed-decorations. When she returned the next day, she learned about the fire.

“I looked in the window and all my stuff wasn’t on the tables,” she related. “They said, ‘We’re closed today,’ and I said ‘No you’re not. We have a birthday party today!’”

Espitia said she was getting ready to go to work at Dairy-Ette on the morning of May 30 when her phone rang. It was Cisco, one of the cooks.

“The place burned,” he told her.

Prikryl was out of town and Cisco wasn’t sure what to do. Espitia promised to come right away.

When she arrived, she found that there had been a fire in the kitchen. Firefighters had broken through the door and the roof in order to access the building.

Prikryl said that the fire was isolated in the kitchen. “It was very fortunate that the whole place didn’ burn down,” he said.

Prikryl’s father opened Dairy-Ette in 1956. He built the red-and-white awning that still stands outside the building where the drive-in-customers wait for their orders to be filled.

The awning was not affected by the fire, but the roof of the building had to be replaced. 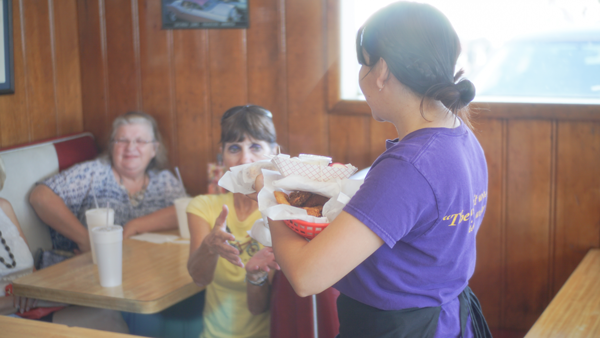 Espitia said the place was “just a mess” after a kitchen fire on May 30 caused the restaurant to be closed for a while over the summer. Photo by Sirigio Ruvalcaba/TheEtCetera

So did the ventilator fan in the kitchen and one of the grills.

Espitia said the whole dining area had to be thoroughly wiped down. It was close to a month before Dairy-Ette was able to reopen.

Joel Klump, the lead admissions representative at Eastfield, said he used to ride his bike to Dairy-Ette as a 10-year-old. As an adult, he still enjoys a float, prepared with Dairy-Ette’s house-made root beer, after a hard day.

“I was concerned that they weren’t going to reopen [after the fire],” he said, “So I was real happy to see that they did.”

“I knew it was going to be fixed,” he said. “It’s not like this thing was in ashes on the ground with a little flag that says ‘game over’ or something.”

Other than having to get used to the new roof and ventilator fan, Prikryl said, things are the same as they were before the fire. Customers have returned as well.

“They’re drifting back in,” Prikryl said. “It’s all picked up back to where it was.”