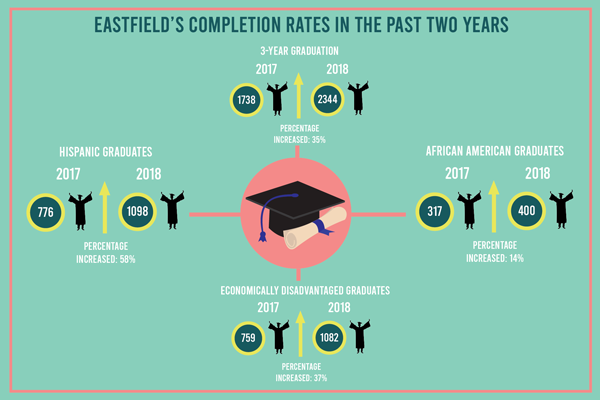 An increase in student completion in 2018 at Eastfield has been recognized by the Texas Higher Education Coordinating Board for “highest improvement,” along with three other community colleges.

Courtney Carter Harbour, executive dean of Arts and Communications, said that Eastfield has been making changes around campus with completion in mind.

She said with the state switching to a completion-based funding program, it’s important for Eastfield to focus on students completing.

But she said the data has not been narrowed down yet to figure out what exactly is and is not contributing to the recent increases.

“Eastfield is known around the district as being a very innovative campus,” she said. “It could just be faculty, staff and administrators really focusing on student success and trying to figure out all of the different ways to engage and retain our students.”

Since not all students have the same needs, Harbour said that the school has to take that into consideration and should be culturally sensitive to ensure that all students are prepared to finish.

Sebastian Garcia, a political science major who expects to transfer in the next year, said that the tutoring services offered in the library were a major contributor in helping him succeed in algebra.

He also noted that Eastfield offering more flex-term classes has been a key to his success, saying that some classes can be too long and having the option to finish them quicker helps him complete at a faster pace.

While Eastfield has helped Garcia in some ways with his goal of transferring to Texas A&M University, he said when he initially began at Eastfield he was dissatisfied with the advising on campus.

“I think the advising process is a little hit or miss,” he said. “As far as recommendations on some classes to take or how many credits needed, some more of the specific questions I had for my advisers sometimes felt it was as clear as mud.”

He said that the unclear advising improved when he started seeing a second-year adviser, but said that first-year advisers should still be able to help students with questions like the ones he had.

Looking ahead, Rachel Wolf, associate vice president of academic affairs and student success, said they are planning to hire more advisers among other things to ensure that Eastfield remains on course to continue increasing completion.

Wolf said that Eastfield will be following the draft “educational plan” that was written by Mike Walker, executive vice president of academic affairs and student success. The plan lays out four goals to focus on for 2019-2020, with the first being a focus on student completion.

“We want to continue our successful trajectory,” she said. “Though our numbers are good, they still aren’t great. I think that especially when you look at improvement, and we’ve made significant strides, there are lots of things we know we can do to improve student completion.”

Since Wolf started in 2009, Eastfield has drastically improved institutionally by creating offices like the Office of Student Engagement and Retention, updating the registration process and creating a more aesthetically appealing campus, she said.

While she can’t tell exactly what contributed to Eastfield’s success in the past year, she said the administration’s comprehensive approach to assessment will allow them to review data for student support offices, student success and different areas of instruction to figure out what has worked for Eastfield and where improvements should be made.

“Eastfield has an open mind in its approach at looking at what works, what might work and being willing to take some responsible risk to possibly reach underrepresented groups,” she said.