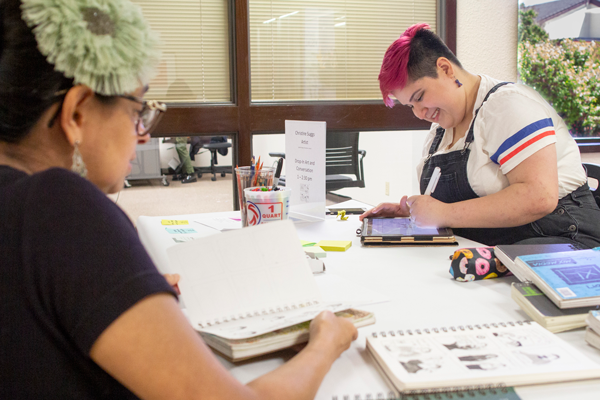 Comics and illustrations by female, queer, non-binary and transgender artists are on display in an exhibition titled “Sequential Self” in F-219C.

Artist Christine Suggs visited the exhibition Monday to speak about her artwork featured in the gallery and draw journal comics with visitors. Her comics center around her identity as someone who is half Mexican, plus-size and bisexual.

She thinks about her younger self, growing up in the “’90s Disney princess era,” and not seeing anyone who looked like her. She wants other people to have what she didn’t.

“That’s kind of what I would like for people to take away, is that you can be all these things and it’s totally fine and good even,” she said.

She said drawing comics is a good way for her to process the issues she’s dealing with.

When she posts her art online she enjoys seeing people relate to her art or give her feedback.

For example, she started a series about plus-sized yoga.

“I would talk about how I can’t do this pose ‘cause my stomach’s in the way,” she said. “I had yoga teachers commenting like ‘Try this.’ And I was like ‘Oh, that totally worked.’ It’s been really fun getting tips from people who actually know things.”

She said she has recently started making more comics about being bisexual, something she said was scary to admit in public.

Her comic “Bi and Married” is featured in the gallery.

“I really appreciate being in a relationship where I can be that open about it,” she said.

Suggs also has a comic titled “Fat and Happy” in the gallery, which she feels perfectly describes the piece.

“That’s something I didn’t think was possible for so long and I spent so many years hating my body and being upset about it,” she said.

Over the past five or so years she said she has made it to the point where she is happy with her body, but the message a lot of people get is that you have to be thin to be happy.

“We focused on artists that are really underrepresented in the medium of comics and those artists are of course, female, non-binary, trans, queer individuals,” Bechtol said. “For the most part, comics are run by white males and it hasn’t changed a whole lot. It has changed just a little bit, but those other voices are still kind of at the fringe”

Bechtol said many comics address real social and political issues like war, genocide, body image, mental illness and identity, and it can be seen throughout the gallery.

Cravens said that while people assume comics will be comical, that’s not always true.

“It’s very mature, serious content matter,” she said. “It’s not lighthearted all the time. It’s like watching a drama movie there might be lighthearted moments, but the drama is drama.”

Science major Jeffrey Montes visited the exhibit and said he didn’t think there would be so many LGBTQ comic artists or that much representation.

“I think we should be talking about everything, obviously in a very respectful way,” he said. “I think it’s good that they’re taking serious subjects and making light of it but still addressing the seriousness of the issues.”