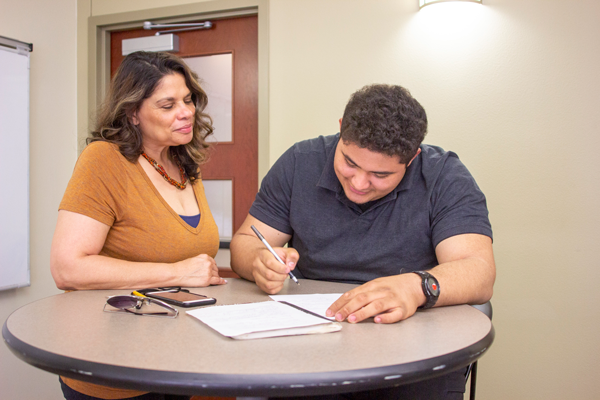 Professor Liz Nichols remembers her first day at a new school. Her family left New York when she was 11 years old because her dad took a job in Westminster, California.

She was enrolled in a public school for seventh grade, a contrast to the private Catholic schools she attended in New York.

It didn’t take her long to realize she had been placed in remedial classes.

“I was upset,” she said. “Each class I went to, I could feel the anxiety welling up in me because I knew that I was smart. I got all A’s and B’s in my school in New York.“

She worked the whole day trying to fight back tears. She felt embarrassed.

When she got home, she said her mother asked her a simple question, “How was your day?”

All of the emotion Nichols had been holding back erupted. She burst into tears.

When Nichols told her mother what happened, she was assured that it would be taken care of. The very next morning, her mother was at the school to meet with the principal.

The principal asked Nichols to come around his desk and read a list of words that contained more than two syllables. Nichols did so easily.

“He looked really surprised that I could read the words,” Nichols said. “He never asked me if I knew what the words meant.”

Afterward, the principal enrolled her in regular courses. Nichols is 55 years old and still hasn’t forgotten that principal’s name or how it felt when her mother stood up for her.

“When she advocated for me, that was a turning point for me in how important education was and also how fierce my mother could be for what she knew was right for her kids,” Nichols said.

Her mother, Myrna Rosario Jones, moved to Brooklyn, New York, from Mayagüez, Puerto Rico, when she was 10 years old. She didn’t know any English and struggled to learn the language.

When Nichols’ mother became pregnant with her at age 17, she wasn’t able to finish high school.

She made sure her children could write their names and read Dick and Jane books before they started kindergarten. She didn’t teach her or her siblings Spanish despite their heritage because she wanted them to have a good command of English.

It wasn’t until Nichols and her two siblings were in school that her mother went back to get her GED certificate. Nichols said her mother put her and her siblings’ education above all else. 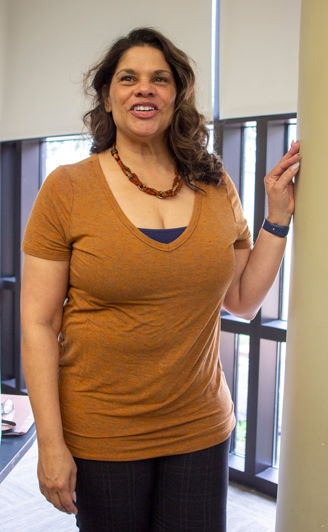 Nichols now teaches history at Eastfield. She graduated from Texas Woman’s University with a master’s degree in history and has been teaching since 1997.

When she first attended college, she went to Bauder Fashion College and received an Associate of Applied Arts in fashion merchandising in 1983.

After she graduated, she worked in store management. Her favorite part of work was training new employees, but the hours were hard to balance. During the holidays she was working 80 or more hours a week

After she had children, she wanted to spend more time with them. So she quit and started volunteering at her son’s school.

“I really felt like there was something missing and I really feel like I was a better parent when I worked,” she said.

Her son’s teacher suggested she become certified as a teacher. Nichols realized how her favorite part of work and teaching connected. So she went back to school to earn her bachelor’s degree.

She attended Mountain View College, then after she transferred to TWU in 1995, her mentor and history professor Ingrid Scobie suggested she stay and get her master’s degree to become a professor.

She started working with the Dallas County Community College District as an adjunct professor in 2000 and became full-time in 2005.

Because she was a nontraditional student, she had to juggle being a parent and working a part-time job while earning her degree.

“I know what it’s like to have a lot on your plate and still have this educational goal,” she said. “I try to share my story with students so that they know I can empathize, but in that empathy to understand that I never emailed my instructors and made excuses for not being able to turn in work.”

“What matters the most to me is that my kids are healthy and happy, that they have the tools and the opportunity to make the most out of their lives in whatever way they choose,” she said. “A close second is social justice. Nothing infuriates me more than to see any people, anybody, any person being dehumanized or discriminated against.”

One of the classes Nichols teaches focuses on history and the African American experience after the Civil War.

She believes part of the reason there is racial discord is because not enough people know about history through the African American experience. She has also taught Mexican American history.

One of the reasons she has interest in the subject is because her ex-husband is African American and her children are biracial.

“That was kind of the impetus to find out more because they needed to know more,” she said. “So a lot of it has been self-taught, and I did some directed studies at TCU. I love teaching that course.”

Daniela Hernandez, an Eastfield graduate who took African American history with Nichols, said she enjoyed the class because it opened her eyes to other people’s perspectives and showed her how things haven’t changed.

“I like that she didn’t judge anything you said and gave everyone a chance to talk,” she said.

Nichols said that people assume her class would be all black students but it tends to be very diverse.

She said that it’s one of her favorite classes to teach because she finds that students know so little and are always surprised by the information, like how slavery worked or that there was a lynching in Dallas in the 20th century.

“So they tend to be very upset,” she said. “They feel shortchanged that they didn’t know more about that kind of experience. I think it helps them be more empathetic toward the struggle of other people.”

Nichols has taught at universities like TWU and TCU, but she found her home at two-year colleges. She said students tend to have more challenges at a community college and she wants to be able to help.

“Had I not quit without any safety net or plan, I wouldn’t have figured out that teaching brings me the most joy,” Nichols said.