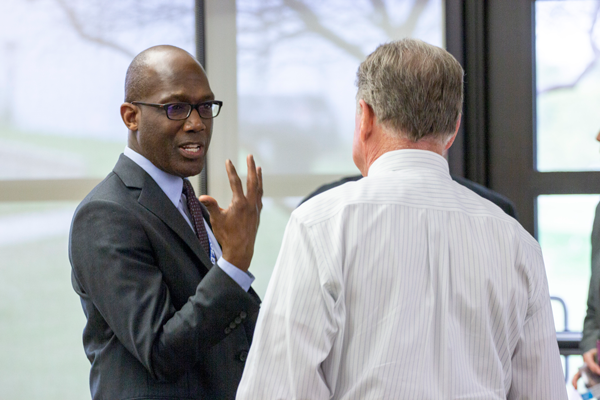 Tealer, and several other college administrators, held the town hall  to be more open with employees regarding campus goals and initiatives.

He also wanted to get feedback about the first draft of the new vision statement.

Much of the criticism of the draft was on the specific language used.

Kim Chandler, dean of planning, research and institutional effectiveness, said that she didn’t like having the word excellence in the vision statement because she felt that the college overused it.

Eastfield’s mission statement is “to provide excellence in teaching and learning.” Tealer liked Chandler’s idea and said that for the next draft, he would like to add language in the vision statement that would add measurable goals for student success, such as by improving enrollment by 5 percent.

“Excellence in student success would not only be a nice term that we could all remember and relate to, it would have distinct meaning that we would be measuring,” he said.

English professor Andrew Tolle and other attendees were concerned that the wording used would promote the idea that students would be seen as customers.

“If I go to the store and I buy something, it’s mine,” Tolle said. “But students are buying a spot in the classroom and they still have to earn and work and, you know, they’re not buying the credit.”

Timothy McDuffie, director of transfer and completion, thought the customer service line was needed because, in a sense, students are consumers paying for a product.

“The reality is that not all of our customers are students,” McDuffie said. “I think sometimes in higher education, because we think of students as students and not as customers, we treat them as such. The services we should be providing them do not measure up to their standards. I think when we get into the mindset of understanding that students are consumers … there’s a level of an expectation of everyone in this room to treat them as such.”

McDuffie said that when students aren’t treated as valued customers, they aren’t telling others how great their experience at Eastfield was.

“I think it’s very critical, that piece right there, I wouldn’t take it out and I would leave it there because that challenges everyone in this room to understand that our students are here, but yet, we’re here because of the students,” he said. “Because if we don’t have students, we don’t have jobs. That is definitely needed.”

Sociology professor India Stewart said that in more than five years of working at Eastfield, she’s never spoken out at a public forum. At the town hall, however, she expressed concerns about the last words of the vision statement draft.

“I feel quite strongly about this idea of students as customers,” Stewart said. “That model is more than problematic and if we continue this consumerist approach, we’re going to have some additional … human resources concerns with attracting them and quality of faculty that you would have at an educational institution that reaches your other goals, no matter what measures you’d use for that.”

Stewart agreed with Tolle’s thoughts about students not coming to college to pay for a degree. Instead, they pay for the right to sit in a class to earn a degree.

“I would be very, very mindful at this point of the increased adoption of this consumerist approach,” she said. “Because there are people who are very much involved in service, we’re all here, I imagine, because we wish to serve our community.”

Tealer said the executive leadership team would work on a second draft of the statement to present to employees.