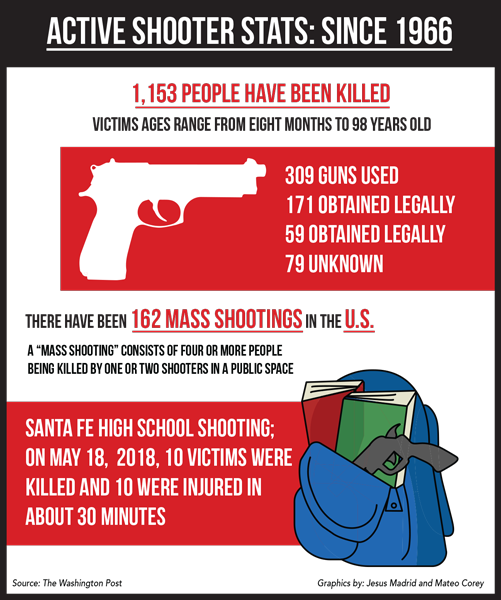 Students and professors can be prepared to handle active shooter situations on campus through the Civilian Response to Active Shooter Events, reducing the threat to the college, Eastfield police Officer Harlan Thompson said.

Thompson hosted a seminar Feb. 28 to teach the Eastfield community about CRASE, a program developed by a group of Texas law enforcement agencies to educate people on the proper response to an active threat.

“I feel like this class is fairly urgent, just because of the incidents that are occurring around the world,” police Lt. Jason Brown said. “We want to make sure that our students are prepared in the instance something like this were to happen on campus.”

Most people will respond to an active shooter situation in three stages, Thompson said: denial, deliberation and decisive actions.

Denial is ignoring the sound of gunfire, believing it to be something else. Deliberation is reacting and adapting to surroundings using fight or flight.

Decisive action is making a thoughtful decision on how to act.

Thompson’s advice was to avoid, deny, defend, a tactic he called an improvement on run, hide, fight.

“If you look at somebody and you scream run, what are they gonna do?” Thompson asked.

“They’re just gonna turn around and take off. Do they think?”

Instead, he advises being aware of your surroundings and being smart about how you flee the situation.

“Avoid is the same thing as run, but it’s running smartly,” Thompson said. “Have as much stuff between you and the bad
guy as possible.”

Denying is barricading access from you and the attacker.

If your defense is breached, you have to be prepared to defend yourself because your life does depend on your response. One thing Thompson warned against was trying to eliminate the threat yourself.

To avoid being shot by officers, Thompson recommends gathering as many people as possible into a room, barricading it and only permitting police officers in while following police commands.

Social Sciences Division assistant Margaret Leicht said she was glad she went to the seminar.

“I think everybody needs to know,” she said. “It’s valuable information that can benefit everyone.”