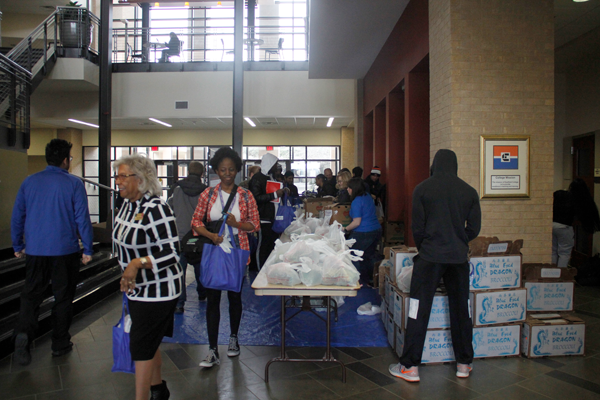 The North Texas Food Bank’s mobile pantry offers fresh produce to anyone in the Eastfield community who needs it. The mobile pantry will continue visits after the campus pantry opens. Photo by Rory Moore/The Et cetera

A permanent on-site food pantry is reaching its final stages of development despite missing its anticipated soft opening, according to college leaders.

Ashmi Patel, director of the newly established Center for Equity, Inclusion and Diversity, said she hopes the pantry will launch by mid-March but could not provide an exact date.

The pantry, which is a part of a district wide partnership with the North Texas Food Bank to combat food insecurity, was planned for a fall 2018 soft opening and spring 2019 full opening.

Patel said that the district has recently finalized its contract with the North Texas Food Bank in order to purchase its food items from them.

She said the college must also detail the roles of those who will work in the pantry and train them properly, which includes hiring a program coordinator to be in charge.

She also said the school plans to have the pantry open even if a coordinator is not hired before their March deadline.

“What we’re trying to do is meet the basic needs of our students so that food and security is not a barrier to their academic success,” she said. “Students come to class, but they have other things that are going in their lives that we have a responsibility to help them with.”

Despite the DCCCD Foundation being tasked with finalizing the food contract, each individual college must have their pantry space approved by the North Texas Food Bank, leading to different timelines for when each campus anticipated opening their pantries.

Eastfield is the only Dallas County Community College District campus remaining without a pantry, despite raising $5,502 in its initial fundraising campaign before last fall.

The campus has also accepted donations, and student organizations such as Phi Theta Kappa have held resource drives for the pantry.

Richland and Cedar Valley both opened their pantries at the beginning of the spring semester. Brookhaven, Mountain View, North Lake and El Centro had established pantries before the start of fall 2018.

Louise Rogers Keim, administrative assistant at Richland’s Office of Student Life, said that the process at the college took far longer than anticipated, as the guidelines for a pantry location are very specific and contract finalization with the North Texas Food Bank can take time.

“There’s a lot of red tape paperwork that goes into it,” she said. “They have to come out and look at the area that you’re going to have the pantry in and approve it, and you have guidelines.”

Despite opening the pantry, Richland currently relies on donations and food drives to keep it sustained.

Patel said that despite the donations and drives on campus, without the North Texas Food Bank’s resources, Eastfield does not have enough to fund and sustain a soft opening.

Last fall, Chancellor Joe May said that the district’s initiative to get pantries in colleges was done one by one, and Eastfield is one of the last campuses to get district aid.

“In order to access that, you have to be trained on their system for putting in the order,” he said. “They also will ensure that we adhere to
health standards.”

Despite not having a permanent pantry, the North Texas Food Bank’s mobile food pantry will visit campus March 7, April 4 and May 2 from 11 a.m. to 1 p.m. in parking lot 8.

Rogers Keim said that an alternative option for students is using the DCCCD My Community Services search engine tool to find resources around them.

There are also already established food pantries near Eastfield partnered with the North Texas Food Bank, including the Mesquite Church of Christ, the Buckner Crisis Center and the Pathway of Life Church.