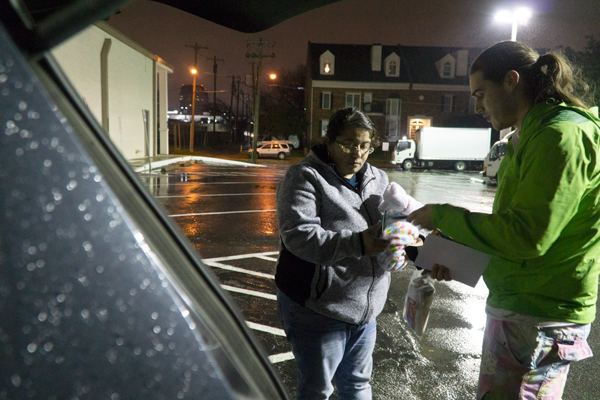 Mayra Fierro and Caleb Bay collect basic necessities from Bay’s car to give to someone sleeping in a blue tent under the Genesis Benefit Thrift Store entrance on Feb. 9. Photo by Yesenia Alvarado/The Et Cetera

Saturday morning cartoons seem to be forgotten in the digital age, but not at Deep Vellum Books.

On this particular Saturday, a group of seven women, ranging in age from teenagers to young adults, crunch on Apple Jacks, Rice Krispies and Froot Loops while watching 1990s cartoons on a small projector screen.

As the X-Men go head to head against a group of underground mutants and Wolverine pines over Jean Grey, the leader of the group asks the women to join her in an activity about the themes of identity within the cartoons.

“Take a step forward if you identify as a Democrat or Republican,” the leader says.

“Take a step forward if you identify as big or small.”

All but one steps forward.

“Take a step forward if you identify as rich or poor.”

“Turn around,” the leader says to the group. “How far did we walk out?”

The group sees that they’ve been separated into a large circle. The leader explains that while identities can make someone unique, they can also divide people with more commonalities than they realize, just like the X-Men vs. the underground mutants.

Their activity was meant to examine identities “outside of binaries,” the leader said. The conversations that ensued ranged from discussions of minorities battling internalized oppression to how the group views Alexandria Ocasio-Cortez as a role model.

The group laughs as they compare Ocasio-Cortez to their leader, and how their leader “bothers” representatives in the name of activism.

The group’s leader, Mayra Fierro, started Cereal and Civil Rights to bridge two of her favorite pastimes: activism and watching Saturday morning cartoons. When she’s not drowning in homework, the 29-year-old Eastfield student spends much of her free time fighting as an activist for the rights of LGBTQ and homeless youth.

She’s been a part of both communities.

In the summer of 2007, Fierro had just returned home from her first year at Eckerd College, a private liberal arts college in St. Petersburg, Florida. She was only 17 at the time (she skipped the seventh grade) and was unhappy with her experience there.

Even with a scholarship and financial aid, her family struggled to keep up with the school’s $38,000-a-year tuition and Fierro found the environment at Eckerd to be an unhealthy one. Drug abuse ran rampant on campus, and Fierro said it was common to see students with “softball-sized balls of opium.”

Worst of all, Fierro was homesick and getting depressed. One of the only times she’d feel truly happy was when she found time to destress and call her high school crush, Rubi Guizar.

Guizar and Fierro met for the first time in health class at high school. Fierro would always walk in late, lean back in her chair and leave her feet on her desk.

Guizar did not like her at all. She thought Fierro was conceited, but after talking to her more through a mutual friend, Guizar warmed up to her.

“Eventually, I always found myself around her,” Guizar said. “I saw that she was different, willing to talk to anyone and she wasn’t into the high school cliques.”

One night, while at Eckerd, Fierro finally went out on a limb and texted Guizar asking her if she would be her girlfriend. They had been close friends for nearly three years by then, and Guizar said yes.

There was just one problem with their newfound relationship: Fierro had never come out to her parents and she was raised in a strict, Catholic home.

While back home, Fierro wanted to take Guizar out. On one occasion when they wanted to see a movie, Fierro’s father refused to let her go out, despite her telling him that she was just going out with friends.

Her father had grown suspicious about her sexuality by this point. He’d known she liked to spend almost all her free time with Guizar.

Feeling rebellious, Fierro decided to leave anyway and walked to a nearby bus stop later that afternoon.

Before her ride to freedom came, however, her parents drove to the bus stop and found her.

Fierro’s mother stood by and watched as her father violently beat her at the bus stop. Before he left, he pulled out a knife and cut off her ponytail.

Fierro hopped on the next evening bus and headed downtown, not really caring where she ended up. She wound up in South Dallas late that night.

Under the dim streetlights, Fierro found her beacon of hope: a 24-hour Williams Chicken. She ordered a two-piece chicken combo, called her uncle, and sat and waited by the drive-thru window.

Around 2 a.m., her uncle picked her up and let her stay on his couch for a few days. Bouncing between his house, other relatives and local friends, Fierro made it by for two weeks.

Then, Fierro and Guizar decided they would run away together. Before they could accomplish their goal, one of Guizar’s friends told Fierro’s parents about their plan.

Fierro’s father was furious. He found her at a friend’s house in Pleasant Grove, picked her up in his truck, and proceeded to beat her for the second time. He dropped her off in the middle of the road and told her to go home.

She started to walk in the other direction.

Before she could get very far, a witness called the police. The police forced Fierro’s father to leave and let her leave on her own.

Fierro was back to couch surfing. She stayed with her godmother, drug-abusing cousins or friends. She worked many jobs to survive: file clerk, office manager and insurance agent. But she credits a cell phone store for keeping her afloat.

The owner of the store loved Fierro’s ability to negotiate with clientele. She’d seen his business expand from five stores to 90, so she admired his ability to turn nothing into something.

“No matter how hard things could get on the street, it was comforting that he always gave me a job,” she said.

This was the job Fierro relied on to take Guizar on dates. At least now that she wasn’t living with her parents, Fierro and Guizar could be together.

Then, Guizar’s father got involved.

He learned  of his daughter’s relationship and forbid Guizar from seeing Fierro until he met her.

Fierro was fearful. She thought of how her own father reacted when she came out and worried about Guizar.

But Guizar’s father was calm though firm with his demands. He said that he would approve of their relationship on the conditions that they didn’t sneak around and that Guizar was home every night.

After several years of building trust, keeping the promises she made to Guizar’s father and marrying Guizar, Fierro began living with the family. 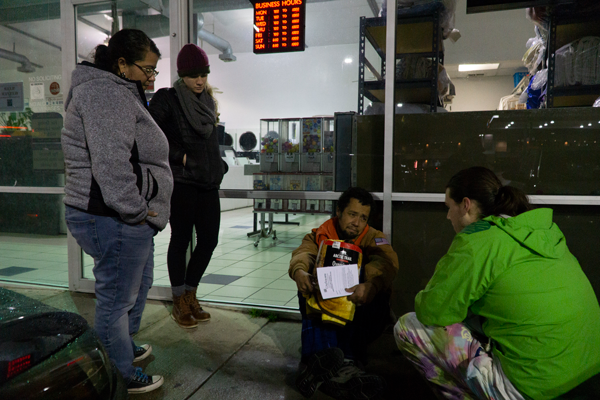 People who work with Fierro know she gives it everything she’s got, said Andy McDaniel, one of the members of Cereal and Civil Rights. She has worked and volunteered with Fierro for almost four years.

McDaniel said the emotions Fierro felt during her hardest times were what motivated her to do everything she could for LGBTQ and homeless youth.

McDaniel first met and volunteered with Fierro by helping LGBTQ Dallas youth. They tie-dyed T-shirts and sheets to craft a “rainbow wall” to shield the kids and teenagers from anti-LGBTQ protesters.

“It was kind of an interesting bonding experience,” McDaniel said. “Standing there, shouting down hate.”

McDaniel has seen firsthand Fierro’s ability to work with kids. She said Fierro can not only teach them practical skills like reading but give compassion that many of the kids never found at home.

“I just show up and move tables and bring books and stuff like that, but Mayra does all the hard work,” she said.

English professor Sabine Winter had Fierro in a class last semester. She said it was apparent that politics and activism were a driving force in her life.

Winter said that while most people might donate time or money to causes, Fierro practices activism differently.

“Most of us try to help, but she is trying to change the system,” she said. 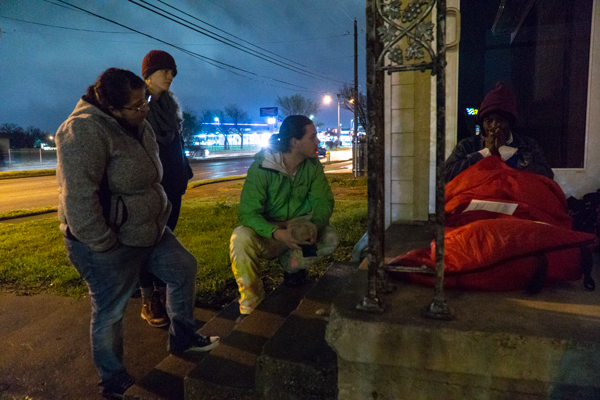 “Wheater” from Memphis, Tennessee, spends his first week in Dallas under the porch of an abandoned house in Oak Lawn on Feb. 9. He began to cry when approached by the team who gave him a blanket, socks, cans of tuna, granola bars, soap and body wash. Photo by Yesenia Alvarado/The Et Cetera

Seeking those who need help

On a cold, rainy, February night in Oak Lawn, Fierro and two other volunteers roam the area as part of a homeless youth search and survey for the Metro Dallas Homeless Alliance.

She’s helping pass out blankets, food, water and other necessities to any homeless person they find.

The group doesn’t let the weather stop their search.

“People need [help] and water is wet, yo,” Fierro said.

They walk several blocks around Oak Lawn, to the local Kroger, Pizza Patron and Cathedral of Hope and find seven people in need.

They find a man sleeping and clutching a damp blanket next to an Allstate insurance building. They wake him up and ask him if he needs some help.

The man says his name is Wheater. Then he bursts into tears.

Fierro and the group hand Wheater everything they can: toiletries, bottled water, granola bars, crackers and packets of mayonnaise.

One of the volunteers runs back to a car to fetch a can of tuna for him. Wheater explains that he’d only been roaming Dallas for a week. He is from Memphis, Tennessee.

Fierro hands Wheater a soaked resource booklet and points out directions to the nearby Cathedral of Hope.

She tells him that she knows what kind of place he’s in and she knows how to help.

She’s previously volunteered with the Cathedral of Hope’s TV ministry.

“Working in the TV ministry, one of the coolest things was seeing the views come in from the sermons we recorded live and aired and seeing the IP addresses ping all over the world,” she said. “To me, it showed that there was people looking for their faith … all over the world. It was pretty cool to be able to provide them that bit of hope.”

Fierro hosts Cereal and Civil Rights on the first Saturday every month at Deep Vellum Books. The next meeting is March 2.

She’s been speaking out at recent public hearings on the Dallas curfew ordinance. The next one is Feb. 27.

Fierro is working to make sure Dallas youth have access to safe spaces and trusted adults. She wants them to not fall victim to citations and to see police in a more positive light.

After everything she’s been through, Fierro understands what it means to be part of a collective, to have an identity.

However, she doesn’t let identities define who she is. She chooses to live as herself, not just all the identities that encompass parts of her life.

“I’m just Mayra,” she said. “There’s lots of different labels and identities that other people can tack up on you, but I decide what I answer to and I answer by my name: Mayra.”

If you’re interested in attending Cereal and Civil Rights or a Dallas curfew ordinance public hearing, contact Fierro at mayrafierro@gmail.com.