Melody Hartley is gathering signatures to end the push toward all eight-week classes. Photo by Yesenia Alvarado

Students and faculty are petitioning against the new class schedules to administration and demanding more suitable class options after Eastfield College shifted to a primarily eight-week schedule.

A petition calls for Eastfield to offer at least one 16-week option for every eight-week class in any course.
Eastfield’s Institutional Research department is collecting data to determine the success rate of the eight-week terms, which take half the time of a regular semester.

Going into the second eight-week term, more than 150 students and faculty have signed a petition to reduce eight-week classes to 40 percent or less of the total classes offered. Administrators recommend taking two eight-week classes at a time to full-time students.

English tutor Melody Hartley started the petition after seeing an increase in tutoring attendance by students who are struggling to complete their work.

“We try to get students to come back repeatedly for tutoring so that they can really comprehend that subject and we can work on a little bit at a time,” she said. “That’s why you don’t cram for tests. But in this eight-week schedule, you can’t do that. You don’t have time.”

[READ MORE: Don’t lag behind, get course help from the tutoring center]

Business major and early college student William Rowley finds time throughout the day to do work and study for his two eight-week classes. He said his first experience with eight-week classes proved to be “pretty fun, but a little rough.”

“Although the eight week comes with more work to me it is a better option than the 16-week course,” he said. “In an eight-week course, you’re learning everything and it’s fresh on your mind, so when you’re testing on it you don’t have to continuously study. For a 16-week course, you have to go all the way back. You can get your degree faster with eight-week classes.”

According to Rachel Wolf, associate vice president of academic affairs and student success, classes that require dedicated time for experiments and projects, like microbiology, are exceptions to eight weeks. Another factor considered is the success rates of courses.

If they’re low, they will most likely not be constrained to an eight-week format.
Wolf mentioned that classes like microbiology or anatomy and physiology would be exceptions.
But biology and A&P professor Rik Post was scheduled to teach A&P in eight weeks.
“Some [students] asked me to tell administration, ‘We don’t like this,’ ” he said. “They felt like it was too fast.” 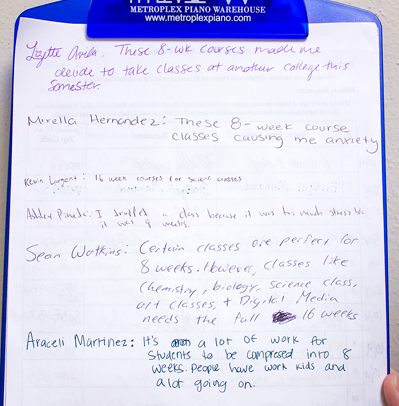 Students write notes to administrators about eight-week classes on back of a petition. Photo by Yesenia Alvarado

Post remains skeptical but says this faster course can prepare his students for the fast-paced classes in medical school. He said that because this is a drastic change for Eastfield, there would be an adjusting period and complications to work through.

He remains concerned, however, that students won’t take double the class time required to study and retain information. He said he doesn’t believe most students will follow through on that necessity.

Post said his students also worry the material for class won’t be retained.

“The students would say, ‘Well I feel like I knew enough for the final, but I’m not sure if I’m gonna remember later on.’ So there were some concerns of how much would go into long-term memory,” he said.

“A lot of faculty don’t give finals on finals week,” Wolf said. “They give take-home papers, or give their final online, so we were starting to think the traditional finals week was not necessary.”

Wolf said the deans and Vice President Mike Walker had initially decided there wouldn’t be a traditional finals week. This was emailed to faculty on Monday, Oct. 29.

She said they are still debating whether there will be no finals week at all or a day when all finals will be scheduled.

Hartley said she knows several students who have dropped courses because of the new schedule or opted to take them at another college. Students have made comments on the back of the petition stating what change they want to see or why eight-week courses didn’t work out for them.

“It’s a lot of work for students to be compressed into eight-week terms,” student Araceli Martinez wrote on the petition. “People have work, kids and a lot going on.”

Hartley said this is why she’s not taking a class this semester. When she couldn’t get into the one math class she needed to retake in a 16-week format, she decided waiting for spring was a better option.

Hartley has taken eight-week courses in English and passed, but she says it’s because she is strong in the subject.

“I don’t want to be forced to take an eight-week class in subjects that I struggle in and I don’t think that anyone else should be either,” she said.

Geology professor Daniel Murphy said it’s possible to balance two eight-week classes at a time and a job. He said students had trouble creating a class schedule that would work with their work schedule because of the different lengths in classes.

Gianelli Lopez, a science major, said that she was disappointed when she couldn’t find an algebra class that didn’t include an eight-week developmental math class that she has already taken.

“I just need to take that one college algebra class, and the school did not provide that for me,” she said. “That pushes me back and so I had to extend an extra semester for me to get my associate degree.”

Lopez said a lot of students are trying to take the classes they need but in these situations where the class they need is not provided, it just pushes back their goal.

“The community college is here to help those people who have jobs and who have kids,” Hartley said. “It’s untraditional students who need to be here or who are here most of the time. These students are the ones who can’t do this. They have other things to do. They have lives and jobs and families to take care of.”

Hartley plans to submit the petition to Eastfield President Eddie Tealer, Vice President Mike Walker, the Office of Student Engagement and Retention and Dallas County Community College District Chancellor Joe May when she feels there are enough signatures.