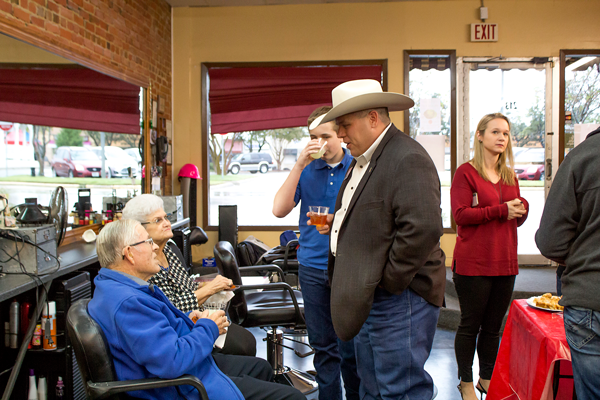 Meek, the Republican nominee, has been a resident of Dallas County for 35 years and a member of Dallas law enforcement for the last 17 years.

He faces interim sheriff Marian Brown, who spent 26 years with the Duncanville Police Department before joining the Sheriff’s Department about four years ago.

Meek says the training he received at Eastfield prepared him for the tasks he has endured throughout his career.

“I thought, ‘I’m going to make this a career. Let’s do something to move my career forward,’ ” Meek said. “So I contacted Eastfield, went through a year’s worth of class, just really enjoyed the level of intensity they brought it to.”

Working as a jailer full-time during his schooling, Meek said he took part-time classes where a lot was expected of him and his classmates.

After he graduated, he took a test at Dallas County Sheriff’s Department. He said he got a great grade, made it into an academy, and since then has not looked back.

Meek said while continuing his education, he would still contact instructors that he knew and relied on some of their education and help.

“Eastfield was extremely helpful in the second academy because I had a lot of information that some of the other classmates didn’t have,” Meek said.

When Dallas County Sheriff Lupe Valdez, a Democrat, resigned last year to run for governor, Meek saw an opportunity. He resigned his deputy job in January to run as a Republican.

“I just kicked everything into high gear,” he said.

When asked about Valdez, a Democrat, he said he always thought she was a nice person but didn’t think she was good for the department.

“The last sheriff was very partisan. It was very, ‘My party says this,’ ” Meek said. “And that’s not our job. My job is to follow the law, not just the party politics.”

Meek’s aunt, Cheri Moody, said that he just wants to do his job and make things better. She said that in any career a person works in, that things are made to be better when everybody on a team is doing their job right.

Most people going in as sheriff try to be politicians, Moody said, but Meek wants to keep his understanding of what it means to be a cop.

“I make it my business to research and look when I want to vote,” said supporter Jennifer Vidler, “I want to delve in. I want to understand. In researching him and then talking with a couple other of my friends, he was the obvious choice. … Somebody who is of the people.”

Heading into the election, Meek said he is knocking on doors and found many people interested in what he has to say.

“Now my heart, I’m a conservative Christian,” he said. “But when I show up to a house, whether there’s a Cruz or a Beto sign in the yard, [it] makes no difference in what I’m going to do.”

The sheriff’s department goes through countless hours of training on inmate mental health and public awareness, Meek said. They do pretty good at that, he said, but there’s always more that can be done. He wants more focus on officers’ mental health.

“We’ve been plagued this year alone with three suicide [attempts], with one successful suicide,” Meek said.

In 2017, 140 police officers committed suicide compared to 129 who died in the line of duty, according to a study by Ruderman Family Foundation.

“There’s a lot going on, and we’re day-to-day troopers,” Meek said. “The family aspect of it is very important to me. My wife and I are going to start a spousal group. I remember at Eastfield they harped on it a lot: If you don’t have your family with you then you’re not going to make it through this.”

Meek said he wants to inform the public about the role of the sheriff’s office, a central line of contact among local, state and federal agencies during an emergency.

“It is one of the most important entities of Dallas County and of the state,” Meek said. “Without a sheriff you really don’t have the structure that’s supposed to be there because it’s technically the last line of defense between the people and the government.”

In his run for county sheriff, he’s had the backing of his family.

Debra Meek serves as her husband’s campaign manager. She said she does pretty much anything that has to do with the campaign except for being the candidate.

The couple also includes their son and daughter in campaign events.

“We don’t do things by ourselves,” Aaron said. “We do things with family.”