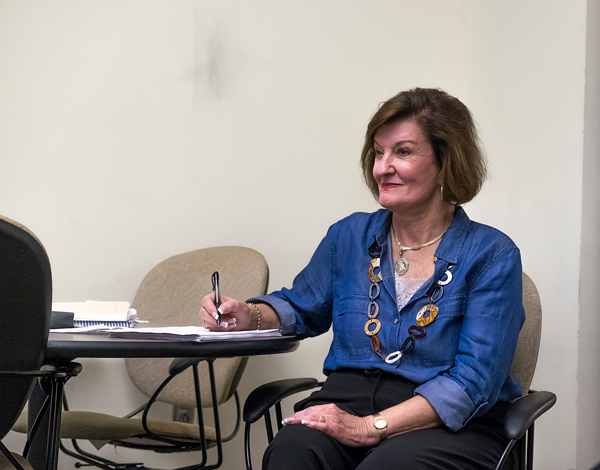 Mary Forrest, who teaches speech and is the Communication Club adviser. Originally from Corsicana, Texas, Forrest has been with Eastfield College since it opened in 1970. Contributor Lindsay Merrell sat down with her to ask about her about her experiences and teaching philosophy.

What made you want to teach?
I just liked it. I like the community, and I like the students.

What is the most rewarding thing to you about being a professor?
Some of the students have come here after having a lot of trauma in their lives. I have always wanted to teach. I’m motivated to help students. It’s what I’ve always wanted to do. They’ve had a lot of difficulties. They come here, and I see them grow and change and become the very best they can be as students and then as young people going out into the world. They become leaders. I like to see that. I like to mentor them.

What made you want to teach at Eastfield instead of a major university?
I was talked to about going to SMU as a teacher and to Baylor University, but that was when I was really into theater and into doing contest speaking.  I decided I was more into just teaching and not about writing articles and doing research. That does not do anything for me. What I like is the love for and connection with the students. 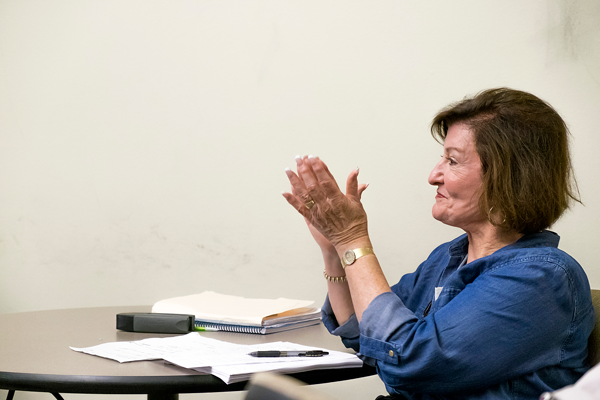 Mary Forrest claps during one of her speech classes. Jesus Ayala/The Et Cetera

What were some of your struggles when you were in college? Did you ever feel overwhelmed?
Oh yes. I was the same as my students now. I did not have the money to go to college. I graduated from high school and then I had to try to figure out a way to pay for it. I was able to, but of course it was very inexpensive then.

I got a Rotary scholarship that helped me a little bit, and when I was at North Texas I got a debate scholarship. Then, at SMU, I got a scholarship to write articles about the theater department for the Dallas Morning News.

So I figured out a way to get through and pay for it. But our students now, they struggle because of the money, and the books are so expensive now.

It didn’t used to be like this. When I was in college they were reasonably priced. When I was working on my doctorate I was working full time here. I was trying to write textbooks, and I had two children and a husband. I was teaching so much, and I had a mother, too, that I wanted to be with, and friends.

I didn’t have time to really study for my doctorate. So that took me 15 years, but I didn’t give up. My mother unfortunately died when she was 69 of cancer, and I remember one of the last things she said to me before  she died.

What advice would you give to new students who are nervous or students who have been here a while and are feeling burned out?
I think I would tell them to join a club and to get connected in some way with other students. In my classes I group students into three groups and I encourage them to exchange phone numbers, emails and to make an effort to get in touch with each other. Because they can do study groups, they can work together, and they can ask each other questions. Now that we’re doing online classes they have to do so much work on their own, and they don’t have a teacher to help them. If they can have each other, they can meet at a Starbucks or in a study room and they can get these things worked out together. They can have some peers to talk to and ask, “did you understand how she wanted us to do this?” I think it would build their confidence.

We have clubs here at Eastfield and study groups, tutors. I would also say don’t overload yourself, and if you can, learn time management skills very early so that you don’t procrastinate. You can do more than you think you can. But you have to learn to organize and not procrastinate.

If you could send a meaningful message out to every student at Eastfield, what would it be?
Well, two things. One, I would say that you cannot have near as rich or full of a life if you don’t get an education. Learning, to me, is invaluable. And then the other thing I would say is once you get your degree and you get a little money, I would reward yourself with traveling. I think traveling opens so many doors to you. It makes you aware that there’s another world out there and lots of other cultures, and they’re all wonderful. It gives you a chance to expand your knowledge. And travel is just fun. It’s just great to get out there and start seeing and doing things in other countries and in other states. The states are all different, even though they’re in the United States. People are different.

Keep your mind open to all these new experiences and new people and never, never allow yourself to be prejudiced. Believe all people can win.