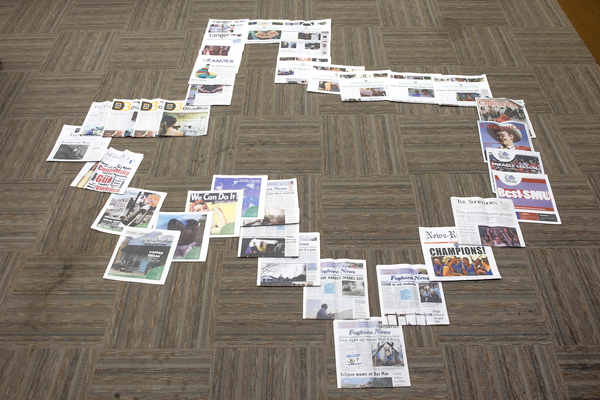 The ways students share their voices are facing changes, and in some cases attacks, across the nation, according to Mike Hiestand, Student Press Law Center senior legal counsel.

While Arts and Communications Dean Courtney Carter Harbour said student media at Eastfield is valued and important, that’s not the case everywhere.

The University of North Texas student newspaper, the North Texas Daily, has faced backlash from administration and was told recently that they would be “weaned off” student services funding over the next three years.

The student newspaper at Arizona State University is also facing funding cuts and each year there are new stories of students being expelled or newspapers being shut down because of unpopular or unflattering coverage.

A UNT spokeswoman said the university does not make decisions on student services funding themselves but rather uses a student council, comprised of members selected by the Student Government Association and the university president.

Muhammad Kara, president of UNT’s Student Government Association, said he supports student media but was not on the committee that decided funding.

UNT officials familiar with the committee’s decision were not available for comment by press time.

North Texas Daily Editor in Chief Alec Spicer said he didn’t notice the hostility from college administration until he became editor, but that aggression has been there.

It was especially clear to him when the UNT president made comments on NT Daily coverage during a Donald Trump Jr. speech hosted by the university.

“The UNT president called the NT Daily ‘fake news’ at the Trump Jr. event because of our coverage,” Spicer said. “They did not like our coverage. That may have contributed to this.”

Hieeistand said backlash from opinions or reporting unpopular news is one reason some student media gets defunded.

In those cases, student journalists have legal options for recourse, such as suing their college or university.

The problem for student journalists in that position is that malicious intent can sometimes be hard to prove.

Spicer said the funding cuts mean no money for a print issue in the summer. The only way it would be produced is with a fully volunteer staff and online-only stories.

“One of the duties of a student press organization is to educate and bring up future journalists, and if you’re defunding and silencing students then you aren’t educating them,” Evans said.

He said that universities that defund student media also remove a tool students can use to lead important conversations on their campus.

As a former student journalist, Harbour said she has a unique appreciation for the work done by student media, including training the staff in skills useful outside news media.

Harbour said students sometimes come under fire for unpopular viewpoints in the opinion section or their work or quotes may be called into question. Being able to work and move on under that pressure is an important skill, she said.

“We don’t just have journalism students here,” Spicer said. “We have art students and science students. We have students from all over the university. If we don’t have money they don’t have this place to come and grow and practice skills.”

Texas-size tug of war: Cruz-O’Rourke race heats up with debates