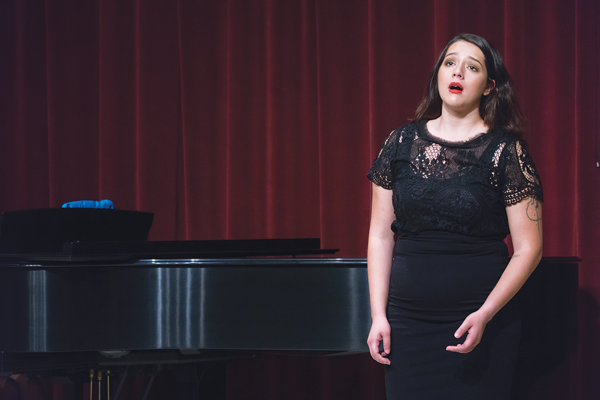 Kincheloe performs solo piece, “The Black Swan” by Gian Carlo Menotti from the play, “The Medium,” a dark, somber lullaby, at a Wednesday recital on Nov. 1. Photo by Yesenia Alvarado/The Et Cetera

Growing up watching movies about Tejano singer Selena, music major Vanessa Kincheloe found herself with a passion for music and singing at a very young age.

She spent her childhood singing and making music in her Odessa home, using a karaoke machine to belt out her favorite tunes.

“I want to be a singer when I grow up,” Kincheloe would tell everyone.

Kincheloe can’t remember a time when music wasn’t a big part of her life.

Now she’s pursuing that passion as a career.

She moved to Dallas in 2015 with her wife, who got a teaching job at Seagoville High School.

After a quick Google search, Kincheloe found that Eastfield was the closest campus and enrolled for the fall.

She wanted to get through her classes quickly so that she could transfer to a university, but her workload proved to be too challenging and her grades suffered.

She also struggled with maintaining her mental health.

When she used to feel depressed, she would blame her life for her reactions. Then she was diagnosed and realized it wasn’t her life but depression and anxiety that made her suffer.

“I think I had it for a while before I understood what it really was and how to help myself,” Kincheloe said.

Carasco has always been supportive of Kincheloe’s dreams.

But she knew when she saw changes in Kincheloe’s attitude that her need for help with mental illness was greater than pursuing her passion at that time.

One of the most telling moments, she took Kincheloe to the Winspear Opera House for a performance.

Seated six floors up, surrounded by hundreds of people caused Kincheloe to have an anxiety attack and the couple had to leave.

Because of the signs of mental illness, Carasco suggested Kincheloe get help from a doctor.

Kincheloe was diagnosed with depression and anxiety, but the diagnosis alone wasn’t helping her.

After a few visits, she learned that she needed to take daily medication.

She was reluctant at first, but she and others around her noticed the quick change in her behavior.

“It’s just a night and day difference,” she said. “Now I’m here and I feel more dedicated than ever.”

During Kincheloe’s year off from classes, she worked at a daycare, teaching children the alphabet. That’s where she realized she loved children.

She learned that her passion for working with children was similar to that for music.

Although she loved her job at the daycare, she wanted to get back to pursuing a career in music.

Once she felt a sense of stability again, Kincheloe decided to give school another try.

When she learned what Kincheloe was going through, Imthurn helped her find work that would fit with her studies.

“They only needed me for two hours, which was perfect because I will still have time for school and still work with kids but better: teaching them music,” Kincheloe said. “So it was like the perfect job.”

Now well into her recovery from depression and anxiety, Kincheloe packs her day full of things she loves.

She works at her job, then comes to Eastfield for her French, math, music theory and piano classes.

She spends several hours a week in voice practice and even sings with the Women’s Chorus of Dallas once a week.

Because of the role she’s played in Kincheloe’s life, Imthrun is one of her heroes.

Carasco has noticed the impact Imthurn has made in Kincheloe’s life.

Finding the motivation to get up every morning is no longer a daily battle, but Kincheloe has found new obstacles in getting from work to class on time and making time to work out.

With a very busy schedule it can still get tough for her, even with the medicine, but she’s learned to make schedules and include breaks to help her throughout the day.

Imthurn said she sees potential and talent in Kincheloe.

Vanessa Kincheloe, 21-year-old music major, performs in front of the mirror in her room. “Make it happen Shock Everyone,” written on her mirror by Kincheloe’s mom as motivation for her. Photo by Yesenia Alvarado/The Et Cetera

Kincheloe and her family scroll through Netflix to find a movie to watch before dinner on Jan. 25. She said her wife and brother are consistent sources of motivation. Photo by Yesenia Alvarado/The Et Cetera

As a singer, Kincheloe spends a lot of time practicing music, whether it’s singing or piano, and sometimes even studying music theory. Photo by Yesenia Alvarado/The Et Cetera

Kincheloe sings with the choir at a Wednesday recital on campus Nov. 1. Photo by Yesenia Alvarado/The Et Cetera