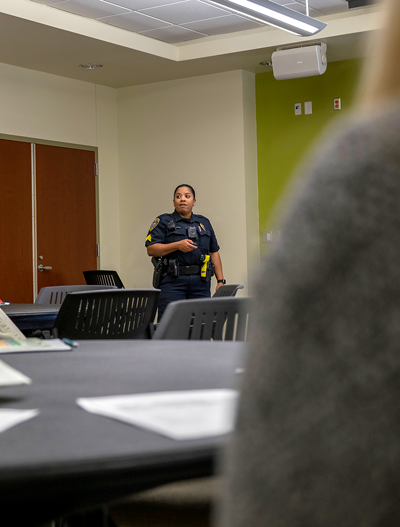 Campus Sgt. Nona Titus gives tips on how women can be prepared to protect themselves. Photo by Jesus Ayala/The Et Cetera

According to the latest report from the US Department Of Justice, 68% of victims of serious violent crime, including rape or sexual assault, reported experiencing socio-emotional problems as a result.

Another one of their reports revealed that only 1 out 4 of all rape or sexual assault victims received help from a victim service agency.

The event was in collaboration with the campus counseling services and the Dallas Area Rape Crisis Center.

Titus began her safety slides with a trigger warning and a message of how serious the effects of such violent crimes were.

Assault, rape, stalking, harassment, dating violence and family violence were listed and defined, followed with the most common places, which Titus said was basically everywhere, where women were attacked in their everyday lives.

“What we’re trying to do is make students and faculty and everyone aware of what’s going on at the school about everyday safety and things that you can do to keep yourself and others safe.” Titus said.

Titus went over ways women could defend themselves against different attacks such as staying on the offense, being constantly aware of their surroundings, not having a set routine, maintaining eye contact with strangers, walking with confidence and purpose, and keeping a barrier, such as a purse, between them and a stranger.

Although learning to use and carry a gun was the most strongly advised method of protection against most crimes, other tools were listed such as a stick or umbrella.

If possible, women should attempt to talk their way out of a dangerous situation.

In cases where this is not possible, Titus said to try to get control of the attacker’s hands or hips.

Titus also said mental state was important when fighting back.

For example, being ready to jump out of a vehicle in case of an abduction and if unrestrained, or injuring an attacker.

She suggested using cuticle trimmers as a defensive weapon or stabbing an attacker in the eye with a key.

She also presented tips for online safety, parking lot safety, tips on how to react in a possible carjacking, a safety app that can be used to inform family or friends of one’s location, how to be a good bystander by speaking out and how to tell if a loved one or stranger is being inflicted.

Titus and Cpl. Moises Avelino both expressed similar thoughts in an interview about what the woman’s safety event would cover.

“I think one of the most important things is going to be know where the resources are,” Avelino said. “They are out there for victims of some of these crimes that are sadly occurring.”

Jaime Torres, a campus counselor, announced that Eastfield was awarded, in connection with The Violence Against Women’s Act, a $300,000 grant by the Department of Justice to improve campus security and provide services for those who have suffered from sexual harassment or violence.

Sean Woods, primary prevention coordinator from The Dallas Area Rape Crisis Center, spoke about the services the center provides, including counseling, crisis intervention and advocacy for those affected by sexual violence.

The grant, with the assistance of DARCC, is to encourage a coordinated community approach and to help ensure that offenders are held accountable and the correct trauma care is given.

“We want to drive effective change, and that’s including to orientate the student body, teaching incoming freshman about rape culture, consent, violence on campus,” Woods said. “That means training for staff, faculty and campus law enforcement.”

“I think it’s very important that we’ve gotten this grant,” said Melanie Reynolds, a human resources specialist who attended the event. “I think that’s huge with everything going on in other colleges. It seems to me like Eastfield is really stepping up and trying to be the forerunner in the district of taking care of the student body and the staff.”