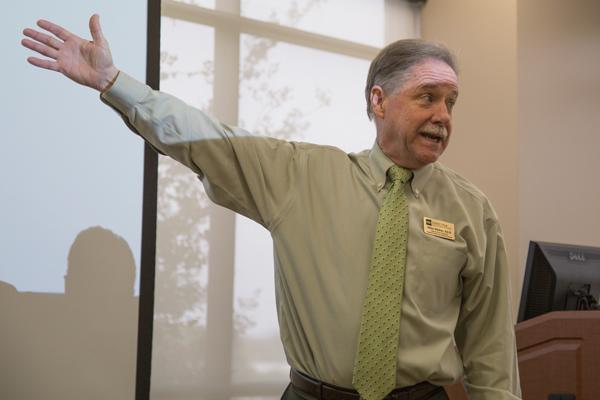 Eastfield’s plan to move to 80 percent eight-week terms by next fall is still going forward, and administrators now hope to see as many as 50 percent in spring 2018.

Mike Walker, interim vice president, held a forum Nov. 16 to discuss the transition to eight-week terms and the reasoning behind it.

Walker said the biggest motivator behind the change is the 11 percent success rate at Eastfield.

“I can’t sleep at night because of that,” Walker said. “We can’t just do nothing.”

Students take an average of five years to complete a two-year degree at Eastfield and leave with an average of $14,000 in student debt, Walker said.

He believes the move to eight week terms will decrease both figures, pointing to the success of other institutions that have made the switch.

Walker said he does not know of any student surveys conducted to determine if students want the program.

Durene Tezock, president of the Plant Based Nutrition Club, said that after doing research she does not believe that eight-week terms will best serve the Eastfield population.
Tezock expressed concern about how eight-week terms will impact students who work or have family responsibilities.

Walker assured Tezock that the flexibly of hybrid and online classes will help with problems such as these.

Walker said that hybrid classes may be the only option for some students.

He said that while offering half eight-week and half 16 week sounds nice it is not possible because of room scheduling.

Even with the technical assistance necessary for scheduling thousands of classes each semester, Walker said, it still takes a lot of effort from college employees to make the schedules work.

A lot of questions continue to go unanswered. It is unknown which courses will remain in the 20 percent of 16 week offerings, how weekend courses will work and where the space to contain the expected increase in enrollment will come from.

While college President Jean Conway said in September that financial aid would likely be one of the easiest parts of the transition,  Walker said at the forum that they still have not figured out how financial aid will work.

Sonya Battle, an administrative assistant, said while some students are apprehensive about the changes, for many institutions across the nation this is simply the way many classes are done.

“We have Columbia College, I go there and we have eight week classes,” said Battle, a former Eastfield student. “It’s happening more often than you might think. It’s not something new.”

Tezock expressed her concern that the change may be too nearsighted.

She worries that increased transportation costs, trouble scheduling classes with jobs and difficulty retaining information may have a negative impact on student success.

Kathleen Launius, associate dean of the Office of Student Engagement and Retention, said students should express their concerns or needs regarding the transition to eight-week terms to the Student Government Association.

She said that if students need more access to tutoring, extended campus hours to work on projects or any changes in student services that Student Government Association would advocate for those changes.