As thousands of bees buzz around her, Dana See pumps pine needle smoke out of a canister. The bees, sensing the smoke and thinking there is a fire that threatens their hive, don’t pay much attention to their white-suited keeper. As the bees dart around the Garland backyard at the sense of danger, some of them inadvertently run into See, making light thumping sounds against her suit and hood.

The jacket is a thick, white, denim-like fabric with a hood attached, netting covering her face. She wears elbow-high gloves, baggy cargo jeans and rubber boots. Every part of the suit is designed to keep bees off of her as she pumps billows of sweet, pine scented smoke at the base and top of the vertical hive.

See is a part of a growing trend dubbed hobby beekeeping, which she thinks may be one method of saving the drastically decreasing bee population.

Hobby beekeepers get involved for different reasons: the honey, the ability to pollinate gardens in an effort to save the bees or even for the novelty of having bees in their backyard.

Ryan Giesecke, president of the Trinity Valley Beekeepers Association, said that he has seen an increase in local urban beekeeping as a response to the news that the pollinators are in danger.

Giesecke said that the increase in beekeepers could be good for the bee population so long as beekeepers are responsible. Neglecting to care for hives can lead to detrimental results.

“A lot of our older members get started in beekeeping because they wanted the honey,” Giesecke said. “In the past years we’ve seen a shift. A lot of people want to save the pollinators.” 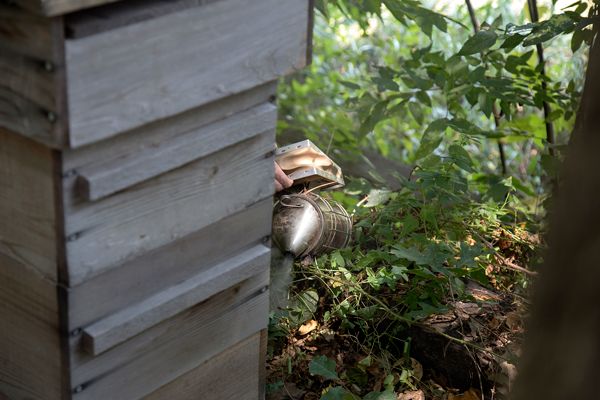 Dana See, biology lab coordinator at Eastfield College and a backyard beekeeper, smokes her bees to get into one of her hives. Photo by James Hartley/ The Et Cetera

“It’s a good, random selection of the population,” he said.

Getting involved in a beekeeper association is the logical first step for anyone who wants to get involved, Giesecke said. New beekeepers should look to veterans of the field for tips and advice in caring for bees.

See said the attention has been good for the bees.

“People have been really enamored with saving the bees and how important bees really are to our environment,” See said. “Then here’s our school with bees becoming the mascot now. They’re really unusual little creatures that provide us with a sweet treat and pollinate the plants in a way that we aren’t even really aware of.”

Fred Garrison, a dentist See started visiting at a young age, had an observable bee farm in his office. See would watch the tiny honey makers move around and work in their hive as she waited for her appointments.

Garrison’s daughter, LaJuana Garrison, has kept the practice going but does not have the bees in the office any more.

When See’s friend Robin Brashier suggested that they buy bee hives, See’s memories of Garrison’s office influenced her decision to jump right in.

The population of bees, who are responsible for a majority of the pollination of plants ranging from flowers to crops, is drastically dropping at a rate that disturbs many experts. The cause: colony collapse disorder, an unexplained disappearance or death of a hive.

Some researchers suggest that loss of habitat, an increase in pesticides and problems with parasites add to the problem, but no solid explanation has been found. It not only endangers the supply of honey, but also the health of plants, crops and farms.

Gans uses his microscopes to study insects like ants and bees, among other things.

Gans said modern agricultural practices, brought on largely by the increasing demand for food, may be partly to blame.

“We can become better stewards for the planet,” Gans said. “There are a lot of people trying organic farming techniques that don’t require those types of things. We need to be careful of how much land we pave over.”

Hobby beekeepers do a lot more for the survival of bees than many of them realize.

“I think it’s awesome every time you get someone like Dana,” Gans said. “She’s an urban beekeeper. She keeps bees in the city. Not only are food crops being pollinated, but all the pretty flowers that you see are being pollinated to make seeds for the next crop.”

Gans said that urban beekeeping not only helps local plants and vegetables to reproduce but also gives bees a chance to expand their reach.

“What people like Dana are doing, they’re literally providing pollinators right there in their backyard, giving them a place to go out in the neighborhoods to pollinate everything that’s out there, community gardens or whatever,” Gans said. “Any time that you take an animal and you provide it a habitat that it would not otherwise have, you help make that species more successful.”

The pollination of gardens is one of two reasons that most neighbors don’t mind backyard beekeepers. For See’s neighbors, a major influence is the honey.

“I’ve never had any complaints from my neighbors over all these years,” See said. “Of course, I also give them honey for Christmas, so that probably helps.” 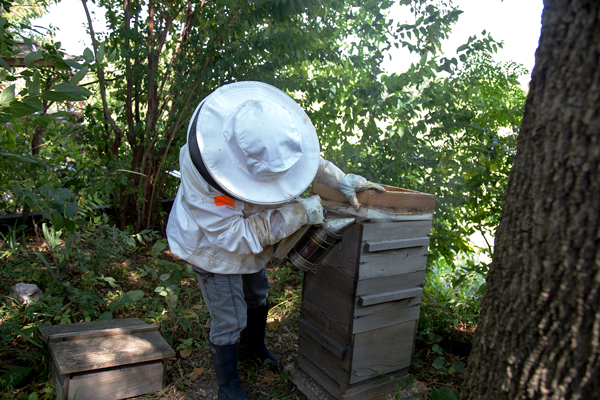 See removes the lid from her bee hive to access her honeycombs. Photo by James Hartley/The Et Cetera

See ends up giving away most of her honey, setting some back for herself each year.

Gans, one of See’s beneficiaries, says that honey has a lot of benefits aside from being delicious. Natural, local honey is believed to help the body adapt to allergens and build an immunity.

The bees travel for up to 3 miles to collect the nectar and make their honey. The hairs all over their bodies, even some on their eyes, carry pollen from one plant to another.

The pollen is gathered from one flower and carried in the hair of the bee to the next, where it is collected and fertilized by the flower. The bees don’t know that they’re doing it, they just want the sugar from the nectar.

It’s a process that big farms are willing to pay big money for, Gans said.

Hobby beekeepers typically don’t make their living off the honey produced by their bees. See only produces about 3 gallons of honey each year— not nearly enough to survive off the profits— and doesn’t have enough bees to fertilize entire farms.

See’s smaller hive stands about 4 feet tall holding only a few thousands of bees, which she says is not a lot compared to big time bee farms. The larger one, a horizontal 5-footer, holds three to four times as many bees.

Together, these hives can produce about 3 gallons of honey a year. See could probably get more, but she doesn’t harvest at the end of the summer because the bees need enough to last them through the winter, when they aren’t gathering pollen.

Most days, she can be found in an office tucked behind a biology lab storage room. See works full-time as a biology lab coordinator. While her fascination for bees began when she was a girl, she says the connection between her biology work and the bees has fueled that fascination.

The honey-making process, from pollen gathering to adding enzymes to cooling the honey by hovering outside the hive and flapping their wings so the air they push cools the honey, fascinates her.

The opening to See’s hives faces toward a greenbelt behind her backyard, full of tall grass and wild plants they visit for pollen. Just seconds ago, the bees were moving in and out of the hive, traveling to the grassy clearing to gather nectar and heading back. Now that they’ve noticed the smoke, most of them have moved inside to protect their honey, ready to move it if they have to evacuate their hive.

See moves slowly and quietly to avoid startling the bees, pumping puffs of smoke on occasion until the bees seem to be calmed down. She sets down the smoker and pulls off the lid to the hive, using her orange, crowbar-like bee tool to pull lose a honeycomb for inspection.

The bees use a type of glue they produce to hold the hive together and keep the honeycombs in place. It’s tough enough that See has to wedge her bee tool in and pull the honeycombs loose.

As she pulls up the long, narrow piece of wood the bees have built the comb on, she notices they’ve already started completing some of their honey and laying eggs.

“It’s amazing how much heavier the hive becomes when the bees have made honey and laid their eggs,” See says.

The eggs are placed in combs just like the honey, but with a rough, burnt orange appearance. They are a stark contrast to the wax-coated golden honey.

See begins lowering the comb back into the hive, satisfied with the progress they’re making on building up their winter stores. 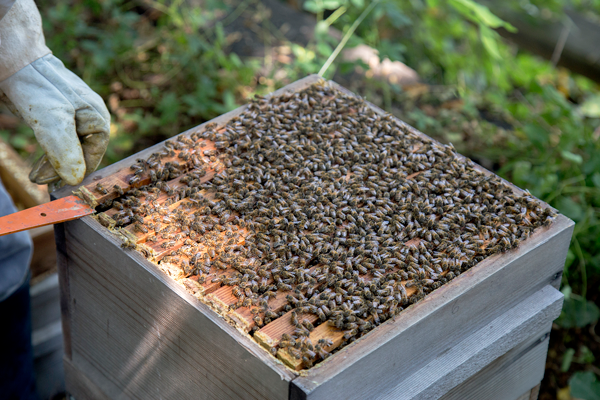 She moves slowly, giving the bees time to get out of the way.

At this point, the only bees left are the workers bees— all female.

The male bees, known as drones, only serve one purpose: fertilize the queen bee’s eggs. After they’ve done their job, they die.

There are some obstacles to it, though. Some cities won’t allow residents to keep bees in their backyard.

Luckily for See, Garland does.

See has to take a number of other circumstances into account in caring for her bees.

Two of the biggest concerns are the food the bees have to last them from winter to summer and the amount of space in their hive.

If they do not have food, they will die.

If they do not have space, they will leave in what is called swarm, relocating their colony to someplace more spacious.

See lost a hive to what is called a swarm one year. After running out of room for their hive, the bees leave together to find a new hive, taking the queen and all the honey they can carry.

It stalls the ability of a beekeeper to harvest any honey.

After replacing the colony and the queen, beekeepers have to let the new residents gather pollen and nectar for a year before collecting honey.

That’s what she’s doing today. The smoke burns See’s eyes for a few seconds as she pumps a couple more bursts into the air. She grabs the lid to the hive and moves it back over the hive, slowly lowering it so the bees have time to escape.

Eventually, See would like to have a couple more hives and the ability to go to farmers markets to sell her honey.

For now, she’s happy with her two hives and 3 gallons of honey. 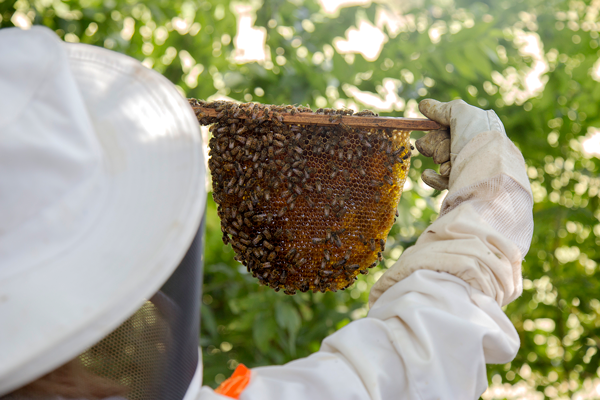 See hoists up a honeycomb, crawling with bees, to examine it. She makes note of the amount of honey produced and the eggs put into place before returning the comb to its hive. Photo by James Hartley/The Et Cetera