For Luz Ibarra, Sept. 5 began like any other day. The humdrum of her pre-work routine filled her morning with a soothing sense of familiarity.

Then, without warning, the television blared the news: The Trump administration was ending the Deferred Action for Childhood Arrivals program for young immigrants.

Like a rug being pulled out from underneath her, the life Ibarra had been building for years came crashing down. The 21-year-old criminal justice major has lived in Texas for the past 18 years, and DACA had allowed her to work legally and pay for her college education.

“The end of DACA was like the end of my life in Texas, in the United States,” Ibarra said. “I felt betrayed by the country I love with all my heart.”

Ibarra is one of 800,000 recipients of DACA, a program created through executive action by then-President Barack Obama in June 2012 that shields undocumented immigrants from deportation and provides temporary work permits. To qualify, immigrants must have been under the age of 16 at the time of their arrival in the United States and must be attending school or serving in the military. There can be no felony or significant misdemeanor charges on their record, and they must have established continuous residency in America for a period of five years prior to the executive order.

Ibarra immigrated to Texas at the age of 3 with her infant brother. They traveled separately from their parents, with the help of a coyote, a person who helps illegal immigrants cross the border.

Surrounded by violence in San Felipe, Guanajuato, Ibarra’s father made the decision to relocate their family to a place that offered more opportunities for his two young children. In the beginning, however, it was a struggle.

When DACA was first implemented, Ibarra and her brother immediately signed up at a cost of $495 each and eventually were approved. Ibarra was excited to gain the freedom to get a job and have legal documentation.

“Now somebody knew who I was,” she said. “Somebody knew I belonged here, and that I am part of the United States.”

Although DACA will be rescinded by March 5, 2018, Ibarra remains optimistic about her future. President Donald Trump has encouraged Congress to implement legislation within the next six months that will allow DACA recipients to stay in the United States permanently.

“Even though it feels like it’s taking a lot from us, I feel like it’s also giving us an opportunity to fight, to keep moving on,” Ibarra said. “I still want to go to the Army and fight for the country that I love.”

Another Eastfield student, 18-year-old Karen Beltran, has lived in Texas for 17 years. A biology major with aspirations to teach high school science 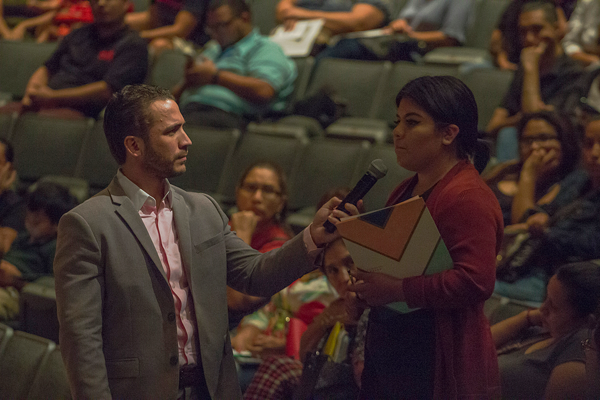 The Dallas County Community College District has made a clear stance of support for undocumented students. Mountain View College, one of the seven in the district, hosted a forum Sept. 6 where panelists answered questions and gave legal advice to DACA recipients. Photo by Bryan Perez/The Et Cetera

and later become a pediatrician, Beltran said she was devastated when she heard about DACA ending.

“This is what helps me go to school, get a job,” Beltran said. “[My parents] said that no matter what happens, no matter where we end up, we should stick together and move forward.”

Many college students like Ibarra and Beltran are in limbo as they wait for Congress to respond.  The U.S. Department of Homeland Security reports that 22 percent of the undocumented population in America is under the age of 25.

Eastfield President Jean Conway said in an email to college staff that she is disheartened by the plan to eliminate DACA.

“I feel it threatens the security and opportunities available to DREAMers,” she said. “Further, losing these students would compromise the richness of our community and classrooms because higher levels of learning and growth occur in environments where there is diversity of experience, culture, ethnicity, and thought.”

DCCCD Chancellor Joe May also released a statement reassuring students that their education is not at risk because of the Noriega Bill. The bill, passed by the Texas Legislature in 2001, allows undocumented Texans to pay in-state tuition.

“We know that these are scary and uncertain times for those students, but I want to assure them that repealing DACA should not have an impact on Dreamers in Texas,” he said. “… DCCCD stands ready to help students attend college under the Noriega Bill, which is state law, whether or not DACA continues. We have a strong history of supporting our students and their educational goals and dreams.”

However, not replacing DACA would create a financial burden for students like Uriel Regalado, who is working toward a degree in automotive technology. 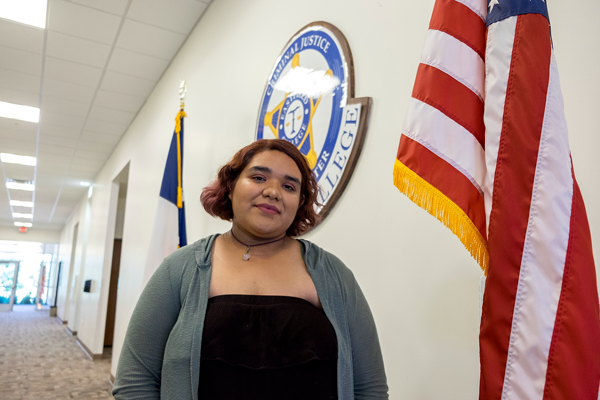 Luz Ibarra, a 21-year-old criminal justice major, is one of about 800,000 beneficiaries of DACA. Photo by Jesus Ayala/The Et Cetera

“The only thing they don’t have is a document that states they are American,” he said.

DACA renewal requests for recipients whose benefits expire between Sept. 5, 2017 and March 5, 2018 will only be processed until Oct. 5, 2017. For the 600,000 DACA recipients whose country of origin is Mexico, the Mexican Consulate is extending certain protections.

“We are offering every single one of the Dreamers that want to come here to the consulate … free legal counseling and legal representation with a lawyer that will be provided by the Mexican Government,” De La Torre said. “We’re willing to do that because you deserve it.”

De la Torre said the young DACA recipients he has spoken to have expressed anger, fear and anxiety over their future in America.

“You cannot afford to be just angry or just sad or just worried,” De la Torre said. “You have to fight by any means to make the system understand the value of you for the United States.”

Though she faces an uncertain future, Beltran offers words of encouragement for others who are in her place.

“To all DACA recipients that are devastated and scared, they should know that they shouldn’t give up,” she said. “… Always pursue your dreams no matter what happens, no matter who knocks on your door. Still keep fighting, because your education matters, your lives matter.”

‘DCCCD stands with you’: Chancellor speaks out on DACA