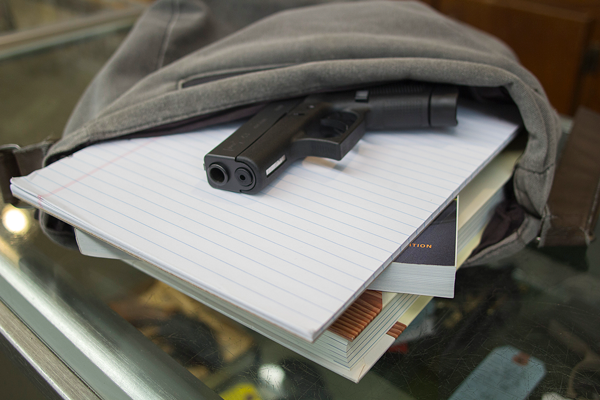 Guns are allowed on all public college and university campuses in Texas. Photo by Yesenia Alvarado/The Et Cetera

The “gun free zone” signs that adorned doors before Aug. 1 are gone and the “gun free” portion of the “drug free, gun free, alcohol free, tobacco free” signs leading into campus has been covered with duct tape.

With the controversial campus carry law going into effect this month, Texans with handgun licenses can now bring concealed handguns to two-year college campuses, including Eastfield.

Only license holders will be allowed to bring guns on campus, and they must remain concealed at all times. Handguns are not allowed in certain areas that have been designated off limits by the Dallas County Community College District.

However, handguns will be allowed in classrooms, faculty offices, common areas and anywhere else on campus that is not marked as gun-free.

Temporary exclusion zones can be set up ahead of a scheduled event if alcohol is present or there is a reasonable risk of violence or threat to the community.

Temporary exclusion zones can be identified at any time before an event starts.

The law has been met with backlash from students, faculty and staff across the DCCCD, as well as across the state.

A lawsuit by UT professors seeking to overthrow the law was dismissed.

When the law went into effect this month on two-year campuses, the response was quieter. A San Antonio College geography professor made national headlines by arriving to teach class in a ballistics vest and military helmet. He told the San Antonio Express-News that it was his way of making a statement.

Tierra Nelson, an education major, said she not only supports the law but plans to carry when she turns 21.

Nelson said she does not want to be unarmew if she finds herself in a dangerous situation, and that it is better to be ready to fight back.

[READ MORE: To bee or not to bee? No question about it: Eastfield adopts new mascot]

“Anything could happen, even during the day,” she said. “It’s better just to be prepared and be safe.”

Turner said that armed civilians can stop or limit a “Columbine-type of situation” and cited situations like the UT tower shooting in 1976, where police later said civilians with firearms were instrumental in limiting the damage done by the sniper and even stopping his rampage.

Turner said that, while she supports the law, she does not know anybody who plans to carry at Eastfield.

Mario Vazquez, a licensed chemical dependency counseling student, said he does not believe it is a good idea to allow students carry guns on campus.

“If somebody gets mad, with our reaction at the time, we don’t always use our best judgment,” Vazquez said. “By them actually carrying a concealed weapon, yeah they’re licensed and have been taught better, but that doesn’t mean they’re going to do the right thing.”


Nor, Mario, does it mean that “they’re going to do the wrong thing.” That assumption on your part is absolutely unwarranted.

ALL historical evidence indicates that licensed gun owners are the (not just one of the, but THE) most law-abiding – and safe! – identifiable demographic in the entire nation… 6 times as law-abiding as police, and 5 times as safe and accurate in marksmanship.