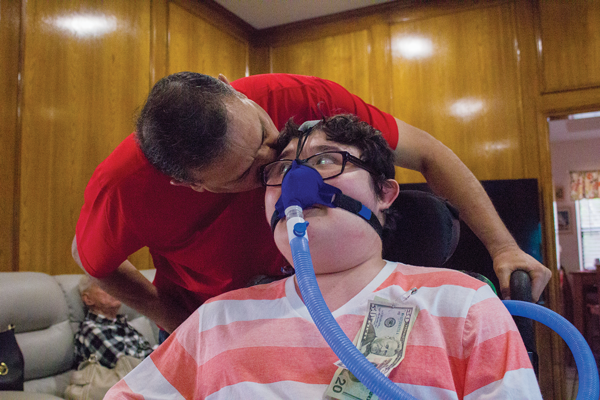 A large cardboard “22” adorns the “Star Wars”-themed cake sitting in front of Edwin Alanis’ table. The large crowd surrounding him, all in their Sunday best, gleefully finish singing “Happy Birthday.” Edwin’s mother, Guadalupe, lights a single candle at the center of the cake.

Edwin gathers his breath and blows with considerable effort, yet he only manages to release a soft puff. Nevertheless, the candle goes out and the family celebrates.

Edwin’s 22nd birthday fell on Easter this year. More than 20 family members visited his home throughout the day to celebrate.

The younger members sat near Edwin’s electric wheelchair and shared their memories of him and one another.

What hides behind the celebration is that Edwin has been through a recent emotional slump due to complications with his illness.

“I think it’s always going on, but [sometimes] at a lesser level,” he said. “It’s not that it’s depression. It’s more of a feeling that you don’t belong.”

DMD occurs when a particular gene on the X chromosome lacks dystrophin, a key protein that promotes muscle strength.

The disorder does not allow Edwin to walk and negatively affects his immune system, heart and lungs. The disorder affects about 500 people nationwide.

Because men only have one X chromosome and the disorder is X-linked recessive, most of those affected are male. The average lifespan for people living with DMD is 25.

Edwin’s family used to live in Mexico, but once his symptoms started to show at the age of 3, they realized that Mexico didn’t have the resources to treat Edwin effectively. His family came to the United States in order to access the medical technology to treat his disease.

In April 2016, Edwin contracted pneumonia and was hospitalized for four months.

Due to his weak immune system, his illness left him in critical condition. Edwin was certain he would die.

“I felt like a fish out of water,” he said. “They had to keep increasing pressure on my lungs until they equalized me, which took, like, two weeks. For two weeks, I felt like I wanted to die.” 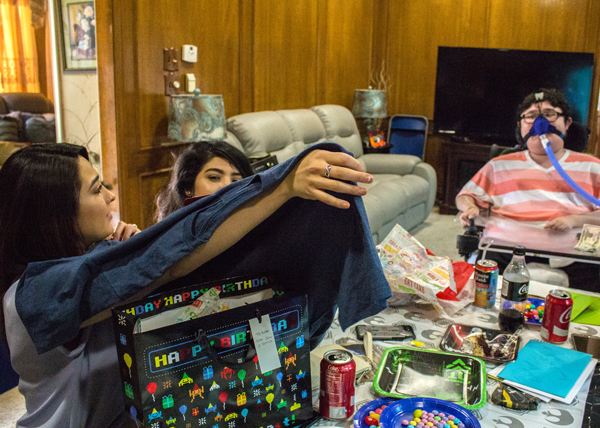 Edwin gets a “Star Wars” shirt at his birthday party. “Star Wars” is one of Edwin’s favorite movies. Photo by David Silva/The Et Cetera

Recovery was difficult. During his hospital stay, he caught a rhinovirus, had to eat through a feeding tube and fractured both arms.

He now requires an oxygen tank to breathe.

When a member of Edwin’s church entered his house on his birthday and asked why he had stopped attending, Edwin was honest.

Edwin’s hospitalization forced him to acknowledge his mortality and has driven a wedge between him and his faith.

Edwin’s experience with pneumonia has also affected several parts of his social life.

“He’s always been a very social person,” Elizabeth Orta, a family friend who helps take care of Edwin, said. “But after his hospitalization, he’s kept more to himself.”

Edwin said he could have no other option but to attend college like any other student.

He said his disease leads to physical obstacles, but he’s confident in his mental ability.

After graduating from Eastfield, Edwin plans to start his own graphic design company.

Despite his commitment to finishing school, Edwin often wishes for a life without his disorder and sometimes feels like he’s invisible to the students around him.

“I am scared of dying before everyone else,” he said. “And I do wish to have what other people have sometimes. I just want to be like everybody else.”

Edwin finds support in his family. His father, Pablo, provides for the family, his mother or Orta accompany him to school and his sister and her husband, Denisse and Justin Dillard, are always helping Edwin.

“My sister has always cared about me, has sacrificed things so that I can be OK,” he said. “During my time in the hospital, they would make me soup, come play games. They talked to the doctors, fought for different things, and they always gave me emotional support.”

Edwin’s closest friend is his 12-year-old brother, Elliot. Edwin and Elliot spend a lot of their time playing video games together, a passion they share. The two also share a lot of friends, with Edwin a part of most online matches.

Guadalupe said that Edwin hit an emotional and physical road bump following the complications relating to his illness, however he remains optimistic.

Edwin said the oxygen tank might elongate his life. It provides support to his breathing and monitors his overall health.

Although his life may surpass the average life expectancy for those with the disorder, he struggles with his persisting condition.

Through the most difficult moments, Guadalupe reminds him of the mentality that has allowed him and his family to persevere.

“We tell him that everyone has to push through no matter the situation,” she said. “Nothing should stop you. We always tell him that we have to live life the way God has given it to us. He tells me ‘Well, I can’t walk.’ I say, “Don’t let that stop you. Your mind and hands are sound, and you can speak. There are so many young people that can do so much for themselves and the world but they don’t do it. Fight for what you want, and be who you are.’”

Edwin spends a lot of time reading science fiction novels and is a huge fan of all things “Star Wars.”

His room is decorated in “Star Wars” memorabilia, and his family’s bookshelf is full of “Star Wars” novels.
“I’ve read every “Star Wars” thing ever written, even if Disney says they’re not canon,” Edwin said with a roll of his eyes.

Edwin’s passion for space operas isn’t just because of their entertainment value. During Edwin’s most difficult moments, he finds himself clinging to a similar hope that pushes the protagonists of the franchise to persevere.

“In ‘Star Wars,’ they have the Force, but it’s kind of like God,” Edwin said. “If you believe, not just in God, but if you believe in what you’re doing, you can do it.”

Edwin lives with the “Galaxy Quest” quote “Never give up, never surrender” to push himself through his most trying times.

Edwin said his outlook on life doesn’t prioritize the things he can’t control. His goal is to simply take things one day at a time. He plans to make his return to church soon.

“You’re always asking yourself, ‘Why does everybody else have this, but I can’t?’ ” he said. “But you also say, ‘I’m me because of the things I have. Otherwise I wouldn’t be the same person.’ I don’t really care about any of that. I just want to survive.”

Edwin Alanis, a 22-year-old digital media major, is wheelchair-bound due to Duchenne muscular dystrophy disorder. Alanis also wears an oxygen mask due to recent complications. He attends his two face-to-face classes on Mondays and Wednesdays and takes the remainder of his courses online. He plays to run his own graphics business once he graduates. Photo by David Silva/The Et Cetera

Alanis makes his way to class. Alanis said he often feels invisible on campus. Alanis says many of his classmates avoid any type of conversation with him. Photo by David Silva/The Et Cetera

After contracting pneumonia a year ago, Alanis now requires an oxygen tank. According to his doctors, the oxygen tank may allow Alanis to live 20 to 30 more years, a rare opportunity for someone with DMD. Photo by David Silva/The Et Cetera

Alanis and Orta wait for an elevator on their way to Alanis’ geology class. Photo by David Silva/The Et Cetera

Before pneumonia complicated his condition, Alanis traveled to various parts of the country. Alanis isn’t able to travel on planes, due to the lack of accesability. Photo by David Silva/The Et Cetera

Alani’s mother, Guadalupe, helps him adjust his oxygen mask. Alanis said that his mother is the main support he has. Guadalupe or Orta always accompany Alanis to school to aid him throughout the day. Photo by David Silva/The Et Cetera

Orta and Alanis wait for Alanis’ father to arrive during a rainy day. Alanis requires a special lift to enter his family’s car. Photo by David Silva/The Et Cetera

Guadalupe and other family members celebrate Alanis’ 22nd birthday. The life expectancy of a person with muscular dystrophy is 25. Photo by David Silva/The Et Cetera

Alanis’ father, Pablo, travels around the country as an engineer and pays for the majority of Alanis’ medical expenses. Alanis’ family also sees support from the Muscular Distrophy Association. Photo by David Silva/The Et Cetera