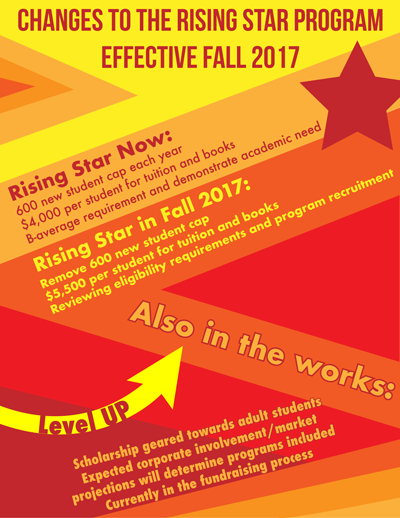 The expansion is DCCCD’s answer to America’s College Promise, a free college program proposed in 2015 by President Barack Obama. Though that plan died with Obama’s tenure, district officials believe the concept is a good idea.

“Even though it wasn’t known as a promise program, this is really what Rising Star was about,” Chief of Advancement Initiatives Pyeper Wilkins said. “The foundation created Rising Star to basically let everyone know if you have financial need and you want you come to college, don’t worry about it. It’s covered.”

The DCCCD also plans to implement the LevelUp scholarship aimed toward students 21 and older.

Wilkins presented the proposal March 7 to the DCCCD Board of Trustees.

Wilkins said that while the free-college program Tennessee College Promise is often cited as the first, it was actually Dallas County who created the first college promise program in 1999.

The Rising Star Scholarship program offers recent Dallas County high school graduates with at least a B-average financial support for college. The program was created by the DCCCD Foundation to help graduates integrate into student life, primarily through financial assistance.

“It would open the pool up,” Marbley-Wilson said. “There would be more individuals interested. We could engage more individuals. It can be a positive thing, but it just needs to be structured properly.”

DCCCD Chancellor Joe May said he was glad the district has worked to improve the academic lives of its students through programs like this.

“The foundation has spent three years doing amazing work,” May said. “We look to revise some foundation-led initiatives and programs that are out there to better meet the needs of students and our community.”

Wilkins said the LevelUp scholarship is hoping to raise $20 million in three years from corporate involvement and private funding to seed that program.

“We want to fund scholarships for students who are going to come into the program that will quickly lead them to a job in our community,” Wilkins said. “We are going to look at that data every year and adjust the programs that we scholarship through this program.”

May said he hopes to help change that with the help of the foundation throughout the DCCCD.

“We are going to fundamentally change everything we do in terms of how we reach people,” May said.

[READ NEXT: Redactions to police records keep students in dark]