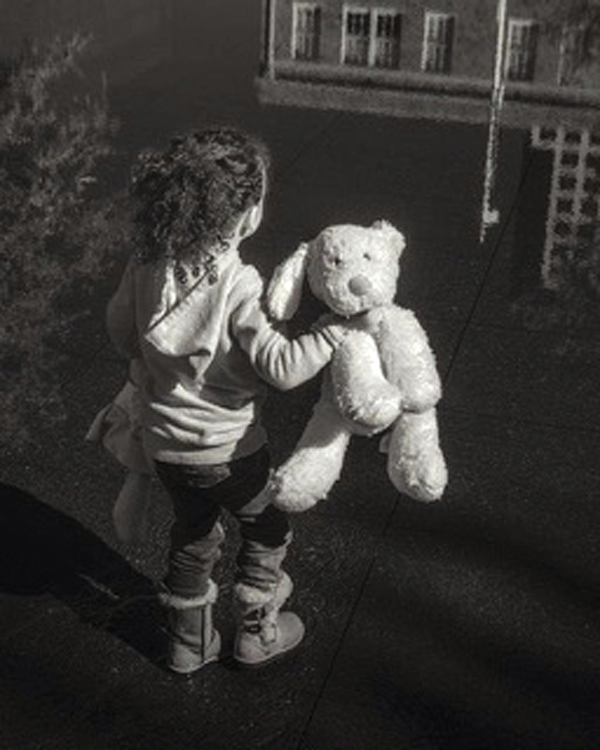 Music professor Melinda Imthurn and her wife adopted Elizabeth, who they have been fostering for the last two years. Photo courtesy of Melinda Imthurn.

Melinda Imthurn and her wife walk through SuperTarget with two shopping carts full of diapers, children’s clothes, sippy cups, tiny spoons, car seats and everything else they didn’t need until a toddler was suddenly placed in their home.

A week-and-a-half-prior, the two had completed their certification to become foster parents after deciding to apply in 2012. They had been anticipating a call for an emergency placement every day since. Now that a 1-year-old is suddenly in their care, they are finding out exactly how much their life will change.

After two years of caring for Elizabeth (whose name has been changed in this story) as their own, Imthurn and her wife formally adopted her April 5.

When Elizabeth was placed with the couple, they had no idea how long she would be staying. Imthurn said this was one of the more difficult parts of fostering her.

“If you’re doing it right, you’ll take care of the child like it’s your own, and you’ll give all the love and all the care that you can give, all the while knowing that somebody could call you and say, ‘Hey, I’m picking her up in five minutes,’ ” she said.

Imthurn, a music professor, is one of several faculty and staff members who have fostered children. Many couples who are unable or do not wish to bear children are becoming interested in fostering to adopt; that is, taking care of children whose biological parents are unable to in the hopes that they will be able to adopt children at some point.

When children are removed from their homes, Child Protective Services says the main goal is to reunite them with their biological families. They set up a plan for the biological parents to regain rights to their children. If the parents do not follow the plan or choose to terminate their rights, they can request that their children be placed with a blood relative or close friend. When all else fails, the child will be recommended for adoption.

CPS keeps the foster parents up-to-date on where they are in the process, which can often be long and convoluted and sometimes frustrating for the foster family.

“When you’re the person that you know they’re the most connected with, … when the professionals that come in and visit and say, ‘This is a good match,’ but the system is saying, ‘We have a different goal,’ that’s really hard,” Imthurn said. “You can be in a position where you’re having to prepare a child for a situation that you know isn’t optimal for them.”

Delores Shelton is an Eastfield administrative assistant who adopted three boys through fostering. She said many people are discouraged from fostering because of the potentially temporary nature of the child’s stay.

“A lot of people say they couldn’t do it because they would get too attached and then that baby leaves and [they] couldn’t handle that,” she said. “What I tell those people is, fostering is not about you. It should not be about you. You do it because of those kids.”

Shelton said that foster parents should get attached in order to give children as much love and care as possible while their biological parents get through whatever rough times they’re experiencing. She said that reunification is always the goal because it means the biological parents did everything they needed to do to be able to have their children again.

“It hurts,” she said, referring to children reuniting with their families after being under foster care. “I’m not going to lie, it hurts a lot. But there’s many more kids out there that need foster parents.”

Shelton knows firsthand what it feels like to say goodbye to foster children. They took care of three children for only three months before they were relocated. A second group of children, three boys, came into their care soon after. Within six months, they had adopted them.

Shelton’s boys came to her when they were between 4 and 6, and they still have some challenges to overcome because of their past. One of the boys has certain issues because of past traumas, such as his intense fear of the dark.

Imthurn doesn’t believe Elizabeth has any memories of her previous home, but the situation could still affect her.

“She was so young when she came to us that she doesn’t remember much about before,” she said. “It still has an effect on them whether they can really remember it or not.”

Imthurn said the process to become a foster parent can be difficult. It took Imthurn and her wife three years to complete the process. For others, it takes a few months.

It took two years for Shelton and her husband to become foster parents, but she said they started out with an agency that didn’t prioritize children’s needs. Once they switched agencies, they were certified within three months.

Brian Roffino, a developmental reading and writing professor, volunteers at local foster agency Jonathan’s Place. He said all potential foster parents must attend a number of training sessions and ensure their homes are safe for children, complete with an evacuation plan.

“It’s a balance,” Roffino said. “You want them to have training, you want these homes to be safe, but you also want people to be able to become foster parents without being overwhelmed.”

There is a great need for foster parents in the area, according to Roffino and Shelton. Roffino and Imthurn both said that many weekends you can find children staying in the offices at CPS. Shelton and Imthurn said more people should consider fostering.

“Very few things that are worthwhile are easy, but it’s the greatest difference you can make in the life of a child,” Imthurn said.

Roffino said it can be difficult to find foster parents who are willing to take in older children because of the “baggage” they can have.

“Above 8 or 10, it’s hard to find families who are willing to take kids who have had years of abuse,” he said. “Not many people want a grumpy teenager, but they need love just like anyone does.”

Imthurn said she and her wife will be taking a break from fostering for now, but that could change later in order to help the kids who are older or may be close to aging out of the system.

“I have this idea that when we’re a little bit older, when work is a little slower, we’ll take in those [older] kids,” she said.

One of the reasons Imthurn and her wife originally decided to foster was the fact that one of Imthurn’s parents was a foster child.

“I don’t know where my family would be if somebody hadn’t stepped up and said, ‘Yes. OK. I’ll do it,” for my parent.”

Shelton said she and her husband decided to foster because he was sterile and she wanted to help children.

While there are many reasons people decide to become foster parents, Imthurn said the idea that people can make a lot of money by fostering is a misconception.

“That’s just the craziest thing I’ve ever heard,” she said. “The only way I can see that you would make money fostering is if you’re not providing for the child’s needs. Talk to any parent and see if they can raise a child on $23 a day. Money had nothing to do with our decision.”

It took two years for Elizabeth’s case to come to the point where adoption by the foster family was recommended. In the hours leading up to the adoption, Imthurn and her wife were still worried someone would come in at the last minute and say the plan had changed.

“We’re on pins and needles,” Imthurn said a day before the adoption was finalized. “I can’t imagine the sigh of relief we’re going to breathe after it’s finished.”

There will no longer be case workers, lawyers, therapists and CPS workers constantly coming through their home, and they no longer have to worry about Elizabeth being relocated at a moment’s notice.

“She’s never leaving,” Imthurn said.  “We don’t ever have to worry about that again. She’s not going to go anywhere. She’s going to stay with us, which is a good place for her.”

Now the family is planning a beach vacation, and Elizabeth is interested in taking dance lessons. Imthurn is excited about her future with her daughter.

“I’m excited about everything,” she said. “Every single thing. High school, graduation, I mean, just having her with us for the rest of our lives.”

Throughout the process, Imthurn had been so focused on the near future that she didn’t realize a future with her child could be possible.

“One of my friends mentioned that she might have a kid and I might be a grandparent one day,” she said. “That had never occurred to me. I am not a stupid person, but that floored me.”