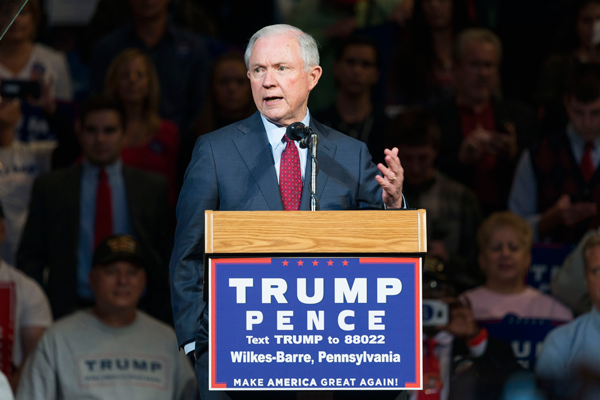 U.S. Senator Jeff Sessions (R-Ala.) campaigns for Donald Trump at the Mohegan Sun Arena on Oct. 10, 2016 in Wilkes-Barre, Pa. Sessions has been offered the position of attorney general. Photo by Michael Brochstein via Zuma Press/TNS

The first sitting U.S. senator to publicly endorse then-candidate Donald Trump, last February, Sessions has spent years advocating on Capitol Hill for the kind of immigration crackdown and border-security strengthening that Trump called for on the campaign trail.

Moreover, Sessions has fought to restrain legal as well as illegal immigration and has opposed special visa programs sought by California’s high-tech industry.

“At this point in time our economy cannot sustain the current lawful rate of immigration, much less the illegal flow,” Sessions declared in March, further contending that “for decades, the Washington elites, the corporatists, and the globalist open-borders advocates have lobbied for even higher levels of immigration.”

He added that Sessions is a “very smart man” who likely will prove a “more serious opponent to immigration” than other potential Justice Department nominees.

Jefferson Beauregard Sessions III, who turns 70 next month, would be older than most of his predecessors as the nation’s top law enforcement officer. He also would carry with him a particularly long and, at times, controversial track record that extends well beyond the Senate in which he has served since 1997.

“Senator Sessions has served on the Senate Judiciary Committee for many years, so he’s well aware of the thorough vetting he’s about to receive,” cautioned Sen. Dianne Feinstein (D-Calif.), the panel’s senior Democrat, adding that she and Sessions “differ on a great many issues.”

His vote for Holder was a relatively rare moment of deference to the Democratic president; Sessions voted against Obama 62 percent of the time last year, a Congressional Quarterly study shows.

A graduate of Huntingdon College and the University of Alabama Law School, Sessions served during the Reagan administration as the U.S. Attorney for Southern Alabama.

In 1986, the Republican-dominated Senate Judiciary Committee rejected his nomination to the federal bench as a U.S. District Court judge on a 10-8 vote, after allegations surfaced about racist and other insensitive remarks.

Sen. Patrick Leahy of (D-Vt.) is the only still-serving senator who voted against Sessions in 1986. Sessions was subsequently elected as Alabama’s attorney general, before he won Senate election in 1996. Sessions has since held his seat easily, while espousing firm law-and-order views that extend to harsh criticism of the marijuana legalization movement.

“It is false that marijuana use doesn’t lead people to more drug use,” Sessions said earlier this year. “It is already causing a disturbance in the states that have made it legal. I think we need to be careful about this.”

As attorney general, Sessions would play a key role in determining how the Trump administration handles potential federal prosecutions in the states that have liberalized drugs laws.

In 2013, for instance, Holder’s Justice Department set a policy that it would not interfere with Washington and Colorado state plans to sell and tax legal marijuana.

There are a number of such policies that can be set, and revised, without congressional approval.

One Sessions supporter, Sen. Dan Sullivan (R-Alaska), characterized his colleague as a “passionate defender of our Constitution and the rule of law,” and as one who will be active in “reestablishing constitutional principles that have been eviscerated by the current administration.”

As a senator, Miller said, Sessions supported extension of the Civil Rights Act and “spearheaded effort to give the Congressional Gold Medal” to civil rights icon Rosa Parks.

Congressional records show that the chief sponsor of the 1999 measure honoring Parks was then-Sen. Spencer Abraham of Michigan, though Sessions was an early co-sponsor and joined 85 other senators in the unanimous vote in support.

Sessions cheered the 2013 Supreme Court decision that nullified a key part of the 1965 Voting Rights Act, and he has, in the past, supported state voter ID laws that critics say disproportionately make voting more difficult for African-Americans.

“I don’t think he’s suited to hold this position; I hope I’m wrong,” Butterfield said. “I hope Senator Sessions will look into the camera … and say that he abhors discrimination in any form, including transgender discrimination. We’re in the 21st century now.”