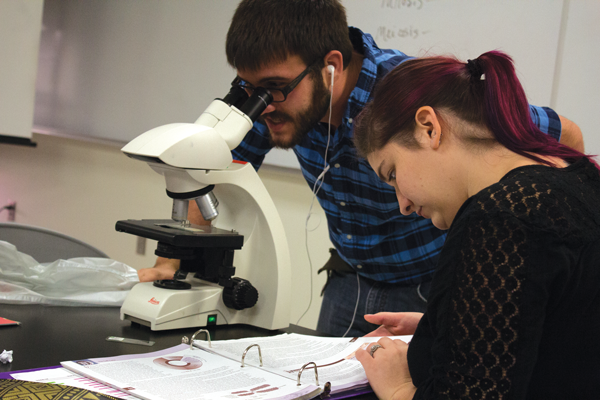 Funds from the Hispanic Serving Institute STEM grant will be disbursed over the next five years.

The first installment of $1.1 million was disbursed last month. Dean of Organizational Development Tricia Thomas-Anderson said most of that will go to construction.

[READ MORE: From sci-fi to reality, Robots headed to space]

“It’s really a feather in our cap, and I’m thrilled about it,” said Dr. Gretchen Riehl, executive dean of STEM. “I’m probably most excited about the new labs. In geology, for instance, they can’t really add any more sections because there’s no lab to put them in. … With the computer science lab, it’s going to allow us to reactivate a program in cyber security.”

The Pleasant Grove campus will be outfitted with a new multi-purpose lab suitable for all science courses except chemistry.

Riehl said this will give Pleasant Grove students more options in their science requirements.

Students “have to get two science classes to get a degree, but they can’t if we don’t have a science lab for them to work in,” Riehl said. “We’ve been teaching geology down there because you can just use boxes of rocks, and they’ve given us a closet to keep stuff in down there. But that’s about all we can teach.”

Dr. Vinu Johnson, who teaches chemistry, expects the organic chemistry lab to be ready for students by spring 2018.

“We’ve been losing students to other DCCCD colleges,” he said. “That’s primarily because we don’t have the proper facilities for organic chemistry. Many of the other colleges, including Brookhaven and Mountain View, they have decent organic chemistry labs. Now that we have this grant, it gives us a platform to increase our enrollment, too.”

Johnson said a major problem with Eastfield’s current chemistry lab is that it does not have a proper fume hood, which ventilates the room and removes any toxic fumes produced by experiments.

“Now we have the opportunity to have a very good system up there,” Johnson said. “We have the ability to have all new equipment, which can be used for organic chemistry experiments.”

Johnson said that in addition to making Eastfield more attractive to students, the organic chemistry lab will better equip students for work in STEM fields.

“Whatever you see around, including plastics and fuel and everything, is primarily based on hydrocarbons,” Johnson said. “Our bodies are even hydrocarbons. … All top-tier STEM fields, including medical or chemical fields, has to have some background in organic chemistry.”

Johnson said the state-of-the-art equipment will offer Eastfield an advantage because it will be closest to what is being used in the industry today.

Eastfield is designated as a Hispanic Serving Institution, and this is the college’s first grant designated for such schools, Thomas-Anderson said.

“I think if we have that designation, we should definitely be pursuing those opportunities, so that’s probably one of the more significant parts of it,” she said.

Riehl said she didn’t expect to receive the grant.