NASA sets sights on Mars: From sci-fi to reality, Robots headed to space 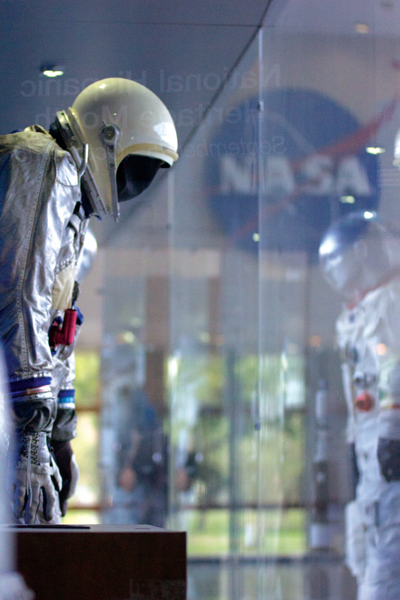 A space suit sits on display at the Johnson Space Center in Houston, Texas. Photo by David Sanchez/The Et Cetera

HOUSTON—Michelle Fraser-Page, an engineer for NASA, walks past models of space-venturing vessels in Building 9 of the Johnson Space Center.

Building 9 is a warehouse that houses models of space vessels, vehicles and robots.

Models of vessels like the Orion manned-shuttle to Mars and International Space Station tower over her as she marches a group of visitors through the building just days after President Obama restated his hope that humans visit Mars by 2030.

Each model is built to scale with switches and levers, some of which activate real functions, that are used to help train American astronauts and test the systems before they are put into use.

Starting in November, Fraser-Page will be building some of those models.

Fraser-Page began working for NASA 28 years ago while she was an engineering student at the University of Illinois. Her first job was at Langley in Hampton, Virginia.

She was raised on science fiction, obsessed with space and space exploration.

“I grew up on ‘Star Trek,’” Fraser-Page said. “I would watch reruns when I got home from school, and I was just fascinated with it. I already loved science, and ‘Star Trek’ really brought me to a love of space.”

Toward the back of Building 9, robots shadow over the engineers building them, some hanging from harnesses and other standing on their own.

Justin Ridley, a robotics engineer, works in the back of Building 9 creating mechanical humanoids and vehicles.

While vehicles such as robotic rovers have been used in the past to explore the surface of Mars, the humanoid robots aren’t yet ready for use.

Humanoid robots will help astronauts with mundane tasks, such as scrubbing railing, or dangerous jobs such as making repairs to the outside of a space station.

Valkyrie, the most advanced humanoid robot according to Ridley, will soon receive a pair of hands and be sent off on missions.

“Right now, we’re teaching it to walk and interact with its environment,” Ridley said. “The idea is to [use them] either in space or on the moon or Mars. Or one of the original ideas was assistance in a disaster zone like a Fukushima, where you’ve got a radioactive environment … if you have a robot that can interact with a human environment, use doors and stairs and all that, the robot can be invaluable.”

To encourage youth to get involved in science, Ridley and other NASA engineers work with students to build their own robotic vehicles.

“We compete in a program called First Robotics,” Ridley said. “It pairs high school students with engineers and we build robots that play a game.”

The game changes every year.

In 2015, the game used towers with goal slots and each student tried to score points for their team by making their robot throw a ball through one of the slots.

This year, it will be something different.

Dr. Camille Alleyne, an associate program scientist who has been working with NASA for 21 years, said she finds herself most fascinated with the International Space Station, a vessel the length of a football field that orbits the earth at 17,500 mph.

Models of the Harmony and Jaxus modules of the International Space Station rest at the front of the building behind a miniature model of the station, which is encased in glass.

Alleyne said one of the most important experiments NASA does deals with gravity.

“Here on the space station, we are able to control that element,” she said. “We learn so much more about what we thought we knew here on Earth. … Researchers from all around the world can do experiments, or investigations, where they can control gravity. Gravity is something we take for granted here on Earth. It’s just a part of our natural environment. How our bodies behave, how plants grow, how cells behave, how materials form, how fire burns — everything is controlled by gravity.”

Alleyne says NASA is working on gravity control in space, but they haven’t made any notable progress. She says that is why it is important for the astronauts to have as much knowledge about low or zero gravity environments before they launch any expeditions to Mars.

With the bigger picture in mind, Alleyne believes the International Space Station becomes even more important.

For Fraser-Page, working for NASA is a dream job.

“I grew up wanting to build those space ships [on ‘Star Trek’], and now I work around these every day,” she said.