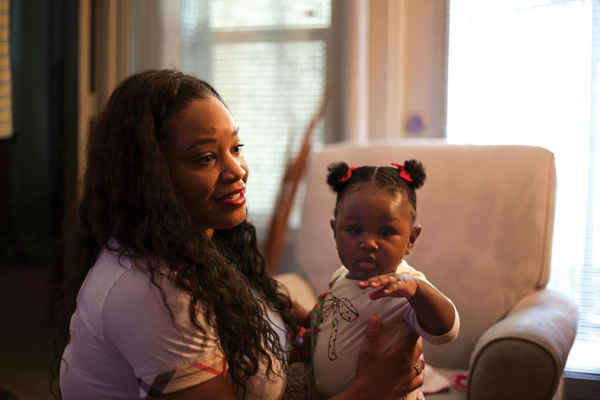 Under current policy, Eastfield and other Dallas County community colleges offer only one day of paid leave to new parents. Employees must then tap into their accrued sick days and vacation time — if they have any available.

While administrators and staff are eligible for vacation days year-round, faculty are only eligible during the summer months, but many teach classes then as well.

Associate Dean of Arts and Communications Sheneika Hathaway said one day of maternity leave does not allow the time a new mother needs. The policy is “antiquated” and needs to change, she said.

“It’s impossible for me to give birth in one day and come back to work, so that was out of the question,” said Hathaway, who gave birth to her first child in January. “There’s no way for us to come back in 24 hours. Some people’s labor lasts longer than 24 hours.”

[READ MORE: Employees get a raise, tuition does not]

It’s not uncommon for public colleges and universities to require new mothers to use their vacation and sick leave after childbirth. Tarrant County College, Tyler Junior College, the Lone Star College System and four-year institutions like the University of Texas, University of Texas in Arlington, University of North Texas at Dallas and Texas A&M do not offer any paid maternity leave.

Susan Hall, executive director of Talent Central for the Dallas County Community College District, said in an email that the district is considering changes to district leave policies in general.

“While there is no specific plan to change this [maternity leave] policy, one of our research efforts this year will be related to review of our leave policies, consideration of other best practices and recommendations to the chancellor for board consideration,” Hall wrote.

Cynthia Hunt, assistant director of marketing at Eastfield, said she had to decide between using her paid leave or taking unpaid time off under the Family Medical Leave Act. 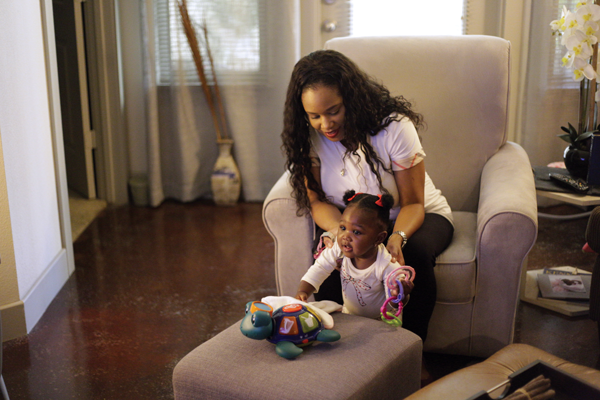 Kensley plays with a toy as her mother holds her up. Photo by Alejandra Rosas/The Et Cetera

The FMLA guarantees that an employee who has worked for the same employer for 12 months can receive 12 weeks of job-protected, unpaid maternity leave.

Hunt had a cesarean section and said it is impossible to return to work so soon after the surgery.

“Recovery sucks,” Hunt said. “The first week is the worst because you’ve just been cut open and sewed back together again. The second week is a little less painful. … Probably about the third or fourth week you’re like, ‘OK, I can move around.’ ”

Hunt said that between recovery and worrying about her newborn, returning to work before her paid leave ran out was unrealistic.

“I like to say that a C-section is the only major surgery you will have in life where you are now responsible for taking care of another human being,” Hunt said. “You don’t have open heart surgery and then they give you a child and say, ‘Now take care of all their needs.’ ”

According to Hathaway, the financial woes that follow childbirth only add to the stress and the need for a longer paid leave period.

“More than likely, you’re going to use all of your vacation and sick leave,” she said. “Then if your child gets sick, you don’t have vacation or sick leave to take care of your child.”

Although the Family Medical Leave Act offers new mothers 12 weeks of unpaid leave to recover without having to worry about losing their job, Hathaway said it isn’t enough.

“How do you have income for 12 weeks to stay home and take care of family?” Hathaway said. “I can take 12 weeks off and not have pay or use my vacation time or sick leave. So, that’s a hard decision when you have to pay your bills and you have a newborn to take care of and you have medical expenses.”

Katawna Caldwell-Warren, who teaches English, said if a professor is out for an extended period they have to pay for a substitute on top of the other expenses. 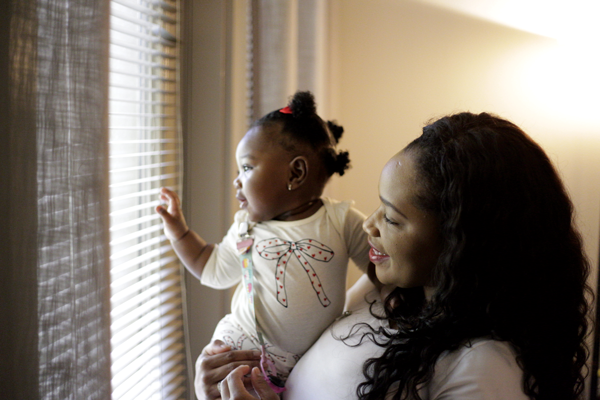 “You have to pay for that, so it’s money out of your pocket,” Caldwell-Warren said.

New parents already spend about $12,000 on child-related expenses in the first year, according to an annual report by the U.S. Department of Agriculture.

Hillary Clinton’s platform includes offering 12 weeks of paid family and medical leave, with at least two-thirds of regular wages being paid. She said she would tax the upper class to fund that paid leave.

Donald Trump wants to offer six weeks of paid leave to new mothers, incentivizing employers to provide childcare in the workplace and encouraging community-based solutions, though he hasn’t explained his plan for putting it in action.

Hunt said having to return to work so quickly can have negative effects on a mother’s psyche and possibly cause her work to suffer as well. She said worrying about her baby’s wellbeing can be distracting.

“Had I needed to drop my baby off at day care, I probably would’ve been a mess coming back to work,” she said.

She said she was fortunate to have her mother take care of her child.

Caldwell-Warren believes an appropriate amount of paid leave is anywhere from two to three months.

“Your body may be here, but your mind is back at home with your baby,” she said.

Before she became pregnant, Caldwell said she was not aware of the single-day leave policy. Neither was Hathaway.

“I asked how long I would get off, and when I got my answer, I had to deal with it,” Caldwell said.

— David Silva contributed
to this report