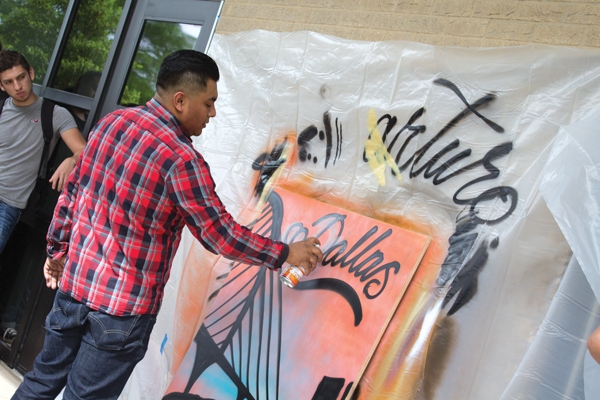 Art was unleashed in the form of spray paint outside of the G building on the morning of April 21.

Students and staff crowded around the Dallas-based graffiti art collective Sour Grapes as they demonstrated spray-painting techniques. Sour Grapes strives to share their work without violating the law and to inspire and motivate young artists to pursue their goals.

Brothers and San Luis Potosi, Mexico natives Arturo, Miguel and Carlos Donjuan grew up in Dallas before founding Sour Grapes. Arturo and Miguel talked about spray-painting freight trains in the middle of the night as children. Arturo said that one night, he felt something biting him and later realized he was standing on an anthill. Dedicated to finishing his art, Arturo endured the pain of the ant bites.

Arturo described their childhood graffiti as both a criminal act and “innocent” because they didn’t know the art they were creating was actually illegal. After a close encounter with the police, the three realized the risks they were taking. The brothers then began searching for a legal way to continue doing what they enjoyed.

“There was no rule book on how to do this the right way,” Arturo said. “We had to figure it all out ourselves.”

The brothers decided to ask a West Dallas restaurant owner if they could host an art show in his business. After hanging some of their art and paintings, Arturo made an anonymous call to a small local paper to spread the word that graffiti group Sour Grapes was hosting an art show in the area. The publicity led them to develop a fan base.

The collective now paints murals in many small businesses and company buildings and on the sides of highways. They have painted murals on Davis Street in West Dallas and on the Jefferson viaduct.

Sour Grapes has hosted art shows in Fort Worth, San Antonio, San Francisco and is planning one in Milan, Italy.

The group has been commissioned by companies such as Nike, Red Bull and Goodyear Tires. They also take commissions from the community, recently finishing murals on five Dallas Independent School District high schools.

“We’re putting murals where no one expects them or even think art would exist on their walls,” Miguel said.

Eastfield Gallery Director Iris Bechtol said that bringing groups like these to the college can inspire artists to look at new forms of art and pursue careers in the arts.

“A lot of it is like teaching,” she said. “Teaching people young and old about their work and also how they could do it too. I think that that is more exciting because it’s like you’re bringing something real here and not just teaching from a textbook. … So it’s really bringing the real people, the writers and the artists and performers, to campus to connect with the students.” 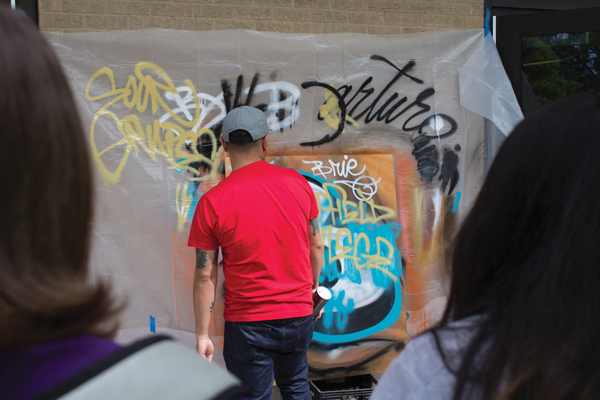 Art major Hector Munoz was surprised to learn that it was a presentation on spray-painting, an art form he respects and admires. The group motivated him to continue working with spray paint, and he hopes that it motivated others as well.

“It was actually amazing,” he said. “These are kids that came from Mexico, that came from nothing, and to see them now, it’s just, it’s amazing to see how they’re working, how big they’ve become and they still give to the community.”

The Sour Grapes studio is located at 801 Seale St. Suite B across from the Belmont Hotel.