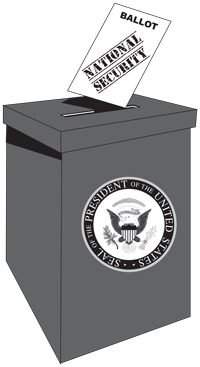 Democratic presidential candidate and former Secretary of State Hillary Clinton spoke out against the Islamic State group but said that the United States does not bear the majority of the responsibility in taking military action against them.

Sen. Bernie Sanders and former Maryland Gov. Martin O‘Malley bluntly opposed Clinton by saying that the U.S. does play a role and must take a collaborative effort with other countries in order to stop the Islamic State.

The political attention has dramatically shifted to national security and the rise of the Islamic State group in the aftermath of the Paris attacks, when shooters and suicide bombers took the lives of 130 people near the largest stadium in France, Stade de France, and small, local cafes, restaurants and a music venue in the French capital.

The Dec. 2 shootings in San Bernardino, California, by an American man and his Pakistani wife elevated fear and heightened talk among politicians. President Obama delivered a speech to the nation Dec. 6.

Republican front-runner Donald Trump called the Islamic State group America’s “No. 1 threat” and proposed that the nation’s best attack against them is to “take out their families” and “bombing the hell out of ‘em.”

Marco Rubio called for the U.S. to conduct bombings on Islamic State training camps, and Ben Carson stated the military must put “boots on the ground.”

“If France decides to go to war, then we should contribute,” said Eastfield student Brook Feldman. “I think we should have troops on the ground.”

The Iraq War in 2003 and the assassination of Saddam Hussein during former President George W. Bush’s administration left a weak central government and many destroyed cities and towns.

The Islamic State group then sought to fill the leadership void in Jihadi ranks after the assassination of Osama bin Laden. In 2001, the Syrian conflict gave the extremist group a country in which to establish their base and gain new recruits. The danger of terrorism now finds itself as the foremost topic of debate, and along with it is the decision of whether the U.S. should accept Syrian refugees.

Citizens trying to escape the civil war in Syria and the Islamic State group have fled to European nations as refugees. These refugees have found constant opposition due to fear of Islamic State infiltration and Islamophobia.

The discovery that one of the Paris attackers used a fake identity to go to France as a refugee has increased opposition in the United States.

American opinion ranges in the types of solutions to avoid any form of terrorist attack. Some think Syrian refugees should not be accepted, and some argue that increasing the vetting process for refugee applications would minimize the risk.

“You can’t just say, ‘Oh you’re Muslim, you must be a terrorist.’ But if you just let anybody in, that can get pretty bad,” Feldman said.

According to the United Nations High Commissioner for Refugees, there are over 4 million registered Syrian refugees as of Dec. 2. The UNHCR reports that 51 percent of Syrian refugees are children 17 and under, while 23.7 percent of the refugee population are women 18 to 59 years old and 22.1 percent are men between 18 and 59.

“If you actually go to the refugee centers, in Dallas, in this area, they are in a really dire state,” said English professor Dr. Shazia Ali, a native of Pakistan and a volunteer at the refugee center in Richardson. “They don’t even have blankets … and you’re gonna tell them, ‘Oh they’re gonna blow something up?’”

Some Americans fear that taking in Syrian refugees will increase the risk of Islamic State infiltration or Islamic radicalism in the U.S., claiming it is a danger to national security.

“It’s the extremists. It’s those fanatics. Not refugees,” Ali said.

Ali says that terrorism and other threats to the United States are issues of national security, but that there are also humanitarian factors in the issue.

Radicalism “is national security, and there is a whole department that is supposed to deal with that,” she said.

The acceptance or denial of Syrian refugees does not diminish the threat of Islamic State in an international standpoint.

The Islamic State group has used modern tools like social media to promote religious fundamentalism around the world. According to Independent, the Islamic State’s goal is to “eliminate the gray zone” in Muslim believers and have it so that their interpretation of Islamic rule is the only Muslim way. They want to achieve a single large, borderless country under their Islamic interpretation and bring forth the “end times.”

The use of social media has allowed for their interpretation of Islam to spread beyond their control of Syria and Iraq. The majority of the Paris attackers were French and Belgium natives. This pins the conflict against the Islamic State group not only as a battle for power through territory but also as a battle of ideas.

It is arguably a priority to the American people that the next commander in chief have an effective plan to destroy the Islamic State.

“Any president that is willing to put troops on the ground to destroy ISIL, with collaboration of different countries, I will agree with that president,” Rameez Sohail, the president of Texas’ statewide junior college SGA, said.