On the morning of Oct. 1, Umpqua Community College student Christopher Harper-Mercer shot and killed nine people and injured nine more before exchanging fire with police officers and ultimately committing suicide in a classroom.

In light of the mass shootings at places such as Columbine, Virginia Tech, Sandy Hook Elementary and Charleston, South Carolina, President Obama has demanded an end to these cyclical acts of violence. When the Umpqua shooting happened, the president said the U.S. must address the need for gun restrictions.

His demand, however, was quickly met with backlash.

Advocates for current or loosened gun restrictions argue that the possession of guns by law-abiding citizens serves to protect everyday people. Restrictions would give criminals, who would obtain guns regardless of whether restrictions are in place, the upper hand. Furthermore, many believe heavy restrictions on guns undermine the Second Amendment and fundamental Constitutional freedoms.

With this dispute again finding its way into the national spotlight, many wonder how current presidential candidates would address this crisis if they were to enter the White House.

“Criminals have weapons, so if somebody’s a good citizen, is in their sane mind, I don’t see a problem with them having the right to carry a weapon if they want to,” freshman Lea Dominguez said. “The crime rate doesn’t depend on whether we hold guns or not.”

According to the Crime Prevention Research Center, the United States is the world leader in registered gun ownership per capita with approximately 88.8 firearms per 100 people. The United States is fourth among developed nations with less than 10 homicides per 100,000 people.

Supporters of gun restrictions claim that more guns do not equal a safer environment. Sophomore Winston Ebune said that Americans should look for alternative forms of self-defense.

“We have a lot more non-lethal ways to protect ourselves,” he said. “Because anybody can be dangerous with a gun. Just because they’re not dangerous doesn’t mean [the gun] is not dangerous. Knowing that gun control is a candidate’s concern is important to me.”

With this heated discussion rising in recent weeks, the 2016 candidates have been asked to respond. However, many Americans have seen this routine time and time again.

“It’ll be a topic, and it’ll be emotional, but ultimately nothing will get done,” said history professor Mike Noble. “The NRA has Congress in their right pocket.”

Since its entry into politics in 1975, the National Rifle Association has proven to be one of the most effective lobby groups in Washington with over 5 million members. A poll done by Pew Research Center shows that 45 percent of gun supporters have been involved in activism, as opposed to only 26 percent of gun opponents.

With many factors contributing to the future of gun control, it may prove difficult for any candidate to fulfill his or her promises for legislation. Nevertheless, gun rights will prove to be a persistent and highly emotional topic of discussion for the 2016 presidential candidates. 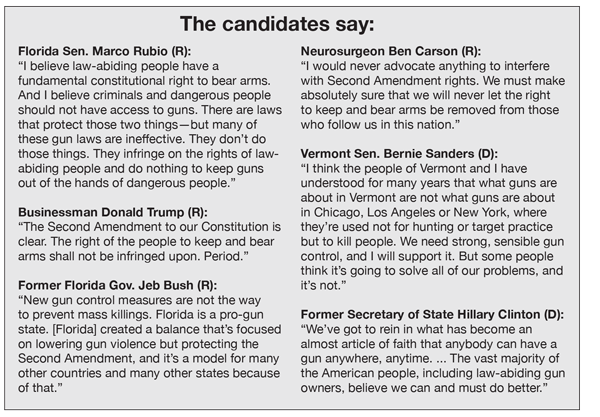