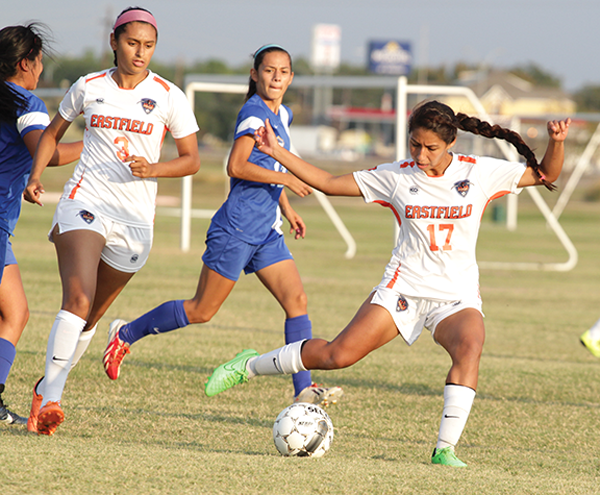 With an Oct. 16 win over Cedar Valley, the soccer team won the Metro Athletic Conference championship for the first time ever.

The win gave Eastfield the honor of hosting the conference tournament. However, due to inadequate facilities, coach Dustin Stein has chosen to move the tournament to the field of the Harvesters’ biggest rival, Richland College. 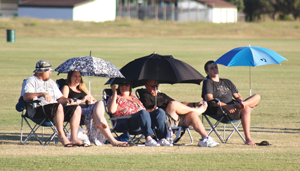 Spectators sit in lawn chairs while watching the game at the Eastfield fields, which have no bleachers. PHOTO BY DAVID SANCHEZ/THE ET CETERA

The conference tournament champion advances to the national tournament in New Jersey.

National Junior College Athletic Association rules state that colleges must have bleachers, a scoreboard and lights to host a conference tour- nament. Eastfield has lights on its field but does not have bleachers or a scoreboard.

Athletic Director Anthony Fletch- er offered to rent a scoreboard and bleachers, but deep cracks in the ground, an unlevel playing surface and damage from a recent lacrosse tournament make it unfit for a conference tournament, according to Stein.

“The goalkeeper box will be abso- lutely shredded,” he said. “Our fields are about to be destroyed thanks to lacrosse right before the end of our season.”

Eastfield owns the soccer fields on the west side of campus and leases them to the city of Mesquite, an agreement that started about 30 years ago, President Jean Conway said.

Association and hosts events such as the lacrosse tournament.

The agreement requires that the city maintain the fields. Stein said some of the cracks in the surface are more than 30 inches deep.

The college and the city are negotiating a renewal to the agreement, which now allows the city exclusive rights to the fields, Conway said.

“What we have asked in the negotiation is to have first dibs on four of the 24 fields,” she said. “And if we could have those four, we could turn one or two of them into true regulation fields, with stands, the whole bit.

“And they could use those fields, but we would approve their schedule instead of their approving our sched- ule. They are very resistant to that right now.”

City Manager Cliff Keheley said in an email that the city is committed to providing “quality, safe soccer fields for the entire community,” but did not respond to specific questions about Stein’s concerns about the field conditions.

Stein believes the field conditions have caused ankle injuries to five players on Eastfield’s roster. One is still battling her injury.

“If we did have a field like Richland’s, it would make practice a lot easier every day,” goalkeeper Abbi Cantrell said. “When I dive by the goal, I feel like I’m diving on concrete.”

The field conditions make the players feel like they aren’t supported by the college, they said.

“We don’t have a setup for support,” defender Torri Sayman said. “We have plenty of fields, but we don’t have bleachers for our fans. We have little bitty bleachers for [the players] to sit on. And our field is very dry.”

Spectators must stand, bring lawn chairs or sit on the ground. Some lay in the grass.

“I have to remind my dad to bring his chair every game, and he forgets every game,” Cantrell said. “So bleachers would help a lot.”

The leasing agreement has also forced the team off their field. Stein had to cancel practice the past two Saturdays because of city events.

The soccer team’s facilities are a stark contrast to the baseball team’s stadium, which the players nurture by hand-watering the grass after each practice and game.

Stein said the soccer team would do the same for its field to help avoid cracks, but the agreement doesn’t allow them to maintain it. Watering is controlled by the city.

Eastfield is undefeated in conference play and confident despite having play on Richland’s turf.

“I would much rather have the game here. We are undefeated on our home field,” Stein said. “But I’m the type of person, I will play anybody, anytime, anywhere. I’m not afraid to go play it at Richland.

“We are comfortable on Richland’s field. What makes soccer a home-field advantage is the crowd. We are very blessed to have a good following. Our fans will be there.”